If Bush Had Done What Obama Is Doing.. 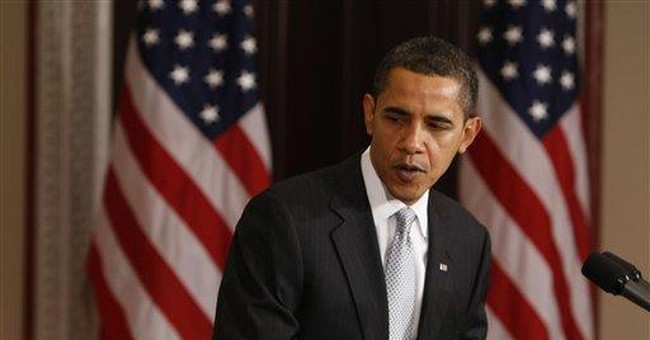 Herewith some questions about contrasts and double standards -- and how the leftists comprising the nameless "they" who rule the world would react to what Barack Obama is doing if Obama were George Bush.

If Obama were Bush, what would their reaction be to the president's failure -- even now -- to submit a plan to salvage the nation's banks?

What would they think of their president if he and his acolytes took out after the other party's leading entertainer -- Oprah Winfrey -- declaring her not only de facto head of the Democratic Party but the foremost embodiment of that party's ideological excesses?

Would they be lamenting a flawed vetting process related to the embarrassing tax problems and quirky (dis)qualifications -- and withdrawals from consideration -- of nominees to top administration posts?

How would they react to polls giving the president a 60 percent job-approval rating, yet finding 44 percent groaning that the nation is "off on the wrong track"?

Speaking of polls, would they be responding sarcastically to a president named Bush -- as Obama has -- talking up price-earnings ratios and ruminating that the stock market "is sort of like a tracking poll in politics. It bobs up and down every day. . . . If you spend your time worrying abut that, you're probably going to get the long-term strategy wrong."?

If Obama were Bush, what would they be saying about how his ascendancy has affected a Dow Jones Industrial Average that has declined more than 30 percent since Election Day?

Would there be outrage when the new attorney general termed this a "nation of cowards" on the subject of race?

Would there be anything positive cited about a secretary of state who journeyed to China -- a country still overseen by Communists and building its military at light-speed -- where she (a) declined even to mention China's human rights abuses while (b) begging it to buy greatly more American debt?

Oh, and on the subject of debt, how would they react to an incumbent president named Bush, suddenly positioned insistently before star-spangled backdrops, mimicking failed New Deal policies wherein FDR warred on the corporate class and sought to spend the nation out of the Depression? (Consider this, from FDR's Treasury Secretary Henry Morgenthau in 1939, a decade after the crash: "We are spending more than we have ever spent before and it does not work. We have just as much unemployment as when we started . . . and an enormous debt to boot!")

Having ripped his predecessor (as they and Obama repeatedly have ripped Bush), what would they have to say about a new president offering record-setting deficits (as Obama has) that will double the national debt in five years, triple it in 10 years, and exceed his predecessor's total eight-year deficit in his first 20 months?

How many among them would have the courage, as The New York Times' Obamaphile columnist David Brooks did the other day, to write that the new president "is not who we thought he was"?

If a president named Bush were doing what Obama has done, in the citadels of the left (Hollywood, the academy, and the remains of mainline churches and the establishment press), what would the take be on presidential proposals to compel small businesses to pony up for employee health-care and retirement plans?

Would they make any cynical remarks about the extent to which the reversal of policies (a) to tap oil shale deposits in the West, (b) to drill offshore, and (c) to encourage nuclear power will increase our dependence on tin-pot oil despots who detest us?

Would they still maintain an adamant silence on the sharply higher consumer costs for goods and services flowing from caps imposed on manufacturers' carbon emissions, and consequently making life in tough economic times tougher not merely for some businesses -- but all?

How would they spin the signature of a president who campaigned against pork-barrel earmarks, on a measure containing not just an earmark here and there -- but (please sit down for this) nearly 9,000? Not to mention a $787 billion stimulus package marking the nation's largest spending increase ever? Nor that such spending measures are intended less to strengthen the economy than to advance his social agenda (health care, education, alternative fuels, global warming) -- and fast?

And, if the incumbent were Bush, would they voice any wrath at an unemployment rate now breaching 8 percent and headed toward the wild blue yonder?

Would they routinely blame today's dismal economy on the Neanderthal policies and practices of yesterday's president?

Would they eviscerate the incumbent president and his congressional footmen for declaiming time and again, "We won!"

If the current president carried the name Bush while pushing the same policies Obama is advancing now, how starkly different would the Delphic pronouncements on him and his policies be -- by the nameless oracles, seated over there on the left, who rule the world?