Straight Talk: McCain, Obama, and the "Change We Need" 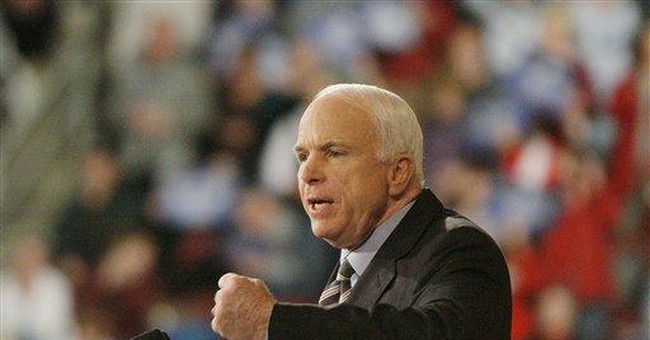 John McCain will get my vote -- no question. He easily surpasses Barack Obama in wisdom, values, character, experience, judgment, truth-telling, and his positions on most of the issues. The decision is not even close.

The case for McCain is matched by the case against Obama. Go ahead and pull the lever for Obama if you want a president -- let's see . . .

-- Who has kept the company of radicals and the corrupt, is a product of the ruthless Chicago political machine, and in the mid-1990s was a member of the New Party -- an offshoot of the quasi-Communist Democratic Socialists of America.

-- Who regarding many of those early associations, and on most issues, is insistently vague, sketchy, and opaque. (For instance, as a regularly attending parishioner over 20 years, could he truly not have heard -- or sensed -- the unconscionable extremism of the spiritual adviser who married him and baptized his daughters?)

-- Who lengthily cites the need for bipartisanship yet can offer no substantive record of it, has on no major issue bucked his party, and speaks of his ideological adversaries with a smug, debonair, patronizing condescension.

-- Who on foreign policy is an isolationist, protectionist naif with essentially no experience, driven by the leftist conviction that he can schmooze even the meanest islamofascist or Iranian thug around to right reason. How successful is a dreamy-eyed untested high-schooler likely to be at mixing it up in the National Football League?

-- Who was willing to lose in Iraq, and even now remains unwilling to acknowledge that the U.S. surge of forces there achieved what might be construed as a win.

-- Who according to Army Times, Navy Times and Air Force Times surveys, trails John McCain among active duty military personnel by better than 2-1.

-- Who campaigns on "change" and "hope" and "yes we can" -- vapid inky nebulosities reminiscent of nothing quite so much as Richard Nixon's "Now More Than Ever" and "Nixon's the One."

-- Who hardly is a conservative reformer like McCain, but a tax-and-spend leftist more radical in (a) his approach to government and (b) his views on America in the world than any nominee for the presidency ever.

-- Who speaks nonsense on taxes generally, and in the midst of a financial maelstrom and slow-motion crash not only would end the Bush tax cuts (terming some of them "corporate welfare"), but also would impose a new redistributionist, spread-the-wealth system levying higher taxes on the most productive and allowing nearly half the voters to ride practically for free.

-- Who nourishes a regulationist mentality that would intrude the federal government ever more into the private sector and private lives.

-- Who in mid-October -- according to polls -- was deemed unqualified for the presidency by 45 percent of the electorate (about the same percentage as in mid-March).

-- Who falls woefully short on energy independence, especially in his odd resistance to the nuclear power without which the U.S. cannot free itself from the tightening noose of hateful petro-dictatorships such as those in Moscow, Caracas and Tehran.

-- Who dismisses as somehow flawed the achieving feminism of a Sarah Palin possessing more executive experience than Messrs. Obama and Biden combined (yet still mocked by the left as unqualified to be vice-president), in favor of the "a woman needs a man like a fish needs a bicycle" feminism of Gloria Steinem.

-- Who, in league with Nancy Pelosi and Harry Reid manipulating a Democratic supermajority in Congress, would preside over an aggressive leftist orthodoxy re-established in Washington utterly unstoppable -- as at no time since the New Deal and the Great Society. Says McCain: "Were my opponent elected with a Democratic Congress in power, not only would there be no check on my opponent's reckless economic policies, there would be considerable pressure on him to tax and spend even more."

So if you believe this is the hour for Barack Obama in concert with a fevered leftist Congress to radicalize and revolutionize, go ahead and make his day -- and liberalism's.

My vote will go to John McCain -- an experienced conservative reformer who understands two things Obama evidently does not: (1) the folly of raising taxes in a financial storm, and (2) the implacable islamofascist threat.

Notes McCain: "In Obama, perhaps never before in our history have the American people been asked to risk so much based on so little." And: "The hour is late. Our troubles are getting worse. Our enemies watch. We have to act immediately. We have to change direction" -- but to a new direction based not on whacked out leftist theory but on prudence and right reason.

To borrow a familiar campaign theme, the McCain-Palin ticket represents precisely the "change we need."