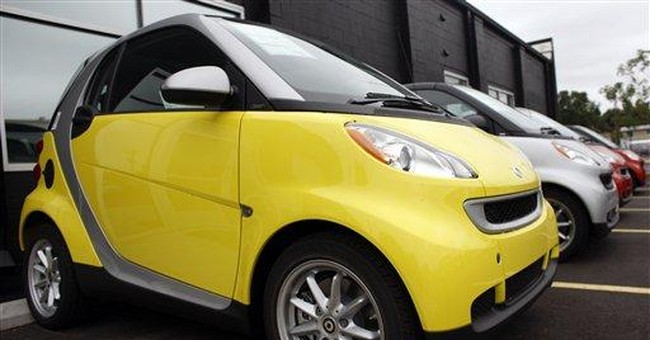 The possibilities are endless when you're out to rescue that which is important to this nation.

I am only sorry we didn't have this national philosophy when there were some important, historic concepts that could have been preserved. History could have been kept alive instead of relegated to the dry books that are the hallmarks of libraries and places of public importance. Topping my list is the Pony Express, which remains first and foremost in the history of the western United States, regardless of the fact that it was in business for just about a year. We could have had horse paths right along the freeway with appropriate feeding stations at various on-ramps. The cost would be less than a night at the restaurant and Broadway play taken in by the first couple last weekend. Now that is what I call putting it in perspective!

I bemoan the death knell of the Helms Bakery delivery that was a major joy of my youth.

In Southern California these brave Helms drivers toured the streets of most neighborhoods in a squat yellow truck that carried bread, cakes, cookies and other baked delights. They signaled you with a three or four valve whistle and everyone delighted in the fresh home delivery. One day they were gone, and the Helms Bakery became the Antique Guild.

There is no doubt in my mind that the trucks were the forerunner of the Smart Car and the concept was the beginning of fast food restaurants. I know they sold corn bread, so they could have converted that delight to ethanol and had the first green delivery. The whole concept could have been kept for less than a year's salary of the vice president's speech writer. The Helms whistle sounded better, the aroma was hands down the winner and the products went down easier than his speeches.

I am just warming up, but because of time and space, I look to other good deeds that must not be left undone in today's business environment. Forget the buggy whip industry, it's too late, but what about the U.S. Post Office? How are we going to save them? They are laying off workers (can't be counted in jobs saved or created) and raising prices of stamps and are still projecting about a $2 billion deficit. Email has made the deliverable letter obsolete. Too slow and too costly, even though we do employ a goodly number of Americans who have to go through hardships each and every day delivering the advertising that goes directly from the mail box to the trash barrel. You can't say that isn't productive as it keeps many industries in business: advertising, printing, trash collection etc. On second thought, we cut down nothing to send an email and the man power and destruction of the environment is much too devastating and expensive for letters anyway. Now the question is what can we do with the buildings? Why not set them up as way stations for the Gitmo detainees while they await processing to the myriad of countries lining up to take them?

Now that I have covered the easy stuff, what in the world are we going to do with the gas stations? Now that we are going green, what about the green we are going to need to take care of the problem they present? Sure, they sit on great real estate, prime corners on major streets and boulevards, but that's the good news. The underground tanks certainly spoil the party. Have you any idea what you have to do to the land where a gas station existed? Are there enough prisoners in our jails to dig up all the land (dirt) and replace it with clean, uncontaminated dirt? Do we have enough of the clean dirt (oxymoron) to go around or are we faced with another land grab, not for the awful black gold, but for the actual dirt exchange? No country with any backbone is going to swap our dirt for theirs. We are lucky they are buying our bonds!

Now that bonds have been brought up, it is highly appropriate we discuss them because all that is being done in the name of (multiple choice) progress, solving the recession or bettering the country, really depends on whether we can sell the bonds (see above) at a reasonable rate to our allies. Allies is not a euphemism for Chinese. Sure, we could sell them for a higher rate, but being that the entire financial universe is ruled, rate wise, by the interest rates on these bonds, it isn't in our best interest to pay higher interest at this time.

Freely translated, the house of cards could topple!

Getting to the bottom line, as they say in most business circles, the $50 billion going to the old General Motors, NE: Government Motors, can simply collapse the shaky improvement in this economy by increasing the interest rates on the treasury notes and bonds, which would increase the interest rates on the mortgage backed bonds, which would raise home mortgage interest, slow sales of new and existing homes, and without missing a beat, send this economy into a new tailspin.

Maybe, just maybe, since we let so many other worthy candidates for redemption from the ravages of the business cycle be, perhaps we should have let this particular entity "go it alone." After all, 50 years of poor design and construction is an enviable record that shouldn't be tarnished with a few mediocre years before total failure. I am not the lead man for these decisions, but why would we risk a return to sensibility in the real estate market, which shows signs of happening, which could be the bedrock of the future vibrant economy for these sorrowful companies. I think the answer might be the plural of the opposite of the confederacy.