An Illegitimate Baby: A Blessing or a Punishment? 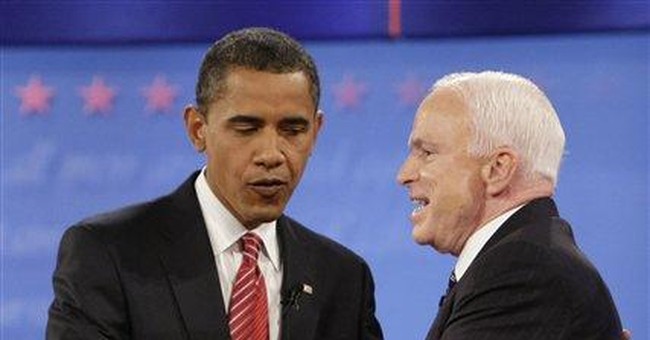 WASHINGTON -- Not until 30 minutes had elapsed in the third and last presidential debate Wednesday night did the national candidates turn their attention to abortion -- the country's most explosive social issue, which divides millions of Americans. What makes this remarkable is that Sen. Barack Obama was vulnerable because of a rare departure during his bitter primary campaign with Sen. Hillary Clinton from the Democratic Party line on abortion -- which takes the position that Democrats cherish human life, even though they are advocates of abortion rights. Implausible though that may seem, it is the formulation successfully used by Democratic campaigners to stave off anti-abortion advocates in their own party.

But Obama went beyond the party line March 29, 2008, when addressing a campaign "town meeting" in a high school in Johnstown, Pa. I was in the audience, packed in as the bitter Pennsylvania primary between Obama and Clinton neared its end.

This central Pennsylvania community is heavily Democratic, represented in the House by the powerful Rep. John Murtha, but tends to be socially conservative. Obama signaled that he was going to take a risk in trying to chart a course that would please both sides on abortion, something that no one has accomplished yet, and Obama certainly failed.

He was cruising along in the question-and-answer format, when a woman asked his view on abortion, but what he said surely did not please his pro-life supporters:

"Look, I've got two daughters -- 9 years old and 6 years old. I am going to teach them first of all about values and morals, but if they make a mistake, I don't want them punished with a baby."

Obama's formulation raised the hackles of evangelical leaders across the country, including Richard Land, who said, "Pro-lifers don't see a child as punishment." Obama's approach to a hypothetical problem contrasted sharply with the way his Republican vice presidential opponent, Alaska Gov. Sarah Palin, subsequently handled a "real-life " situation. Shortly after Obama's town hall comments in Pennsylvania, Palin announced that her 17-year-old daughter was pregnant, would give birth to the baby and would marry the father.

Outside the evangelical community, however, not many Republicans made much of that contrast, and Obama has not been challenged on whether he views an illegitimate baby as a treasure or a punishment.

In fact, abortion went unmentioned in the debates until scarcely 10 minutes remained in Wednesday night's debate, when moderator Bob Schieffer of CBS News finally brought up the subject by asking McCain whether he could appoint a pro-choice Supreme Court justice. McCain replied he would have "no litmus test on judicial appointments." That did not please pro-life Republicans, as little did during the brief exchange on abortion.

While describing himself as a "proud pro-life Republican," McCain did not ask Obama whether he really considered the birth of a baby a punishment.

Neither McCain nor Schieffer asked for Obama's views on extreme pro-abortion legislation pending in Congress that would prohibit states from any limitations on abortion and would begin widespread federal funding of abortions. That failure, along with McCain not pressing Obama on whether he really considered the birth of a baby a "punishment," surely did not raise McCain's standing with suspicious socially conservative Republicans.