CEO at the GOP 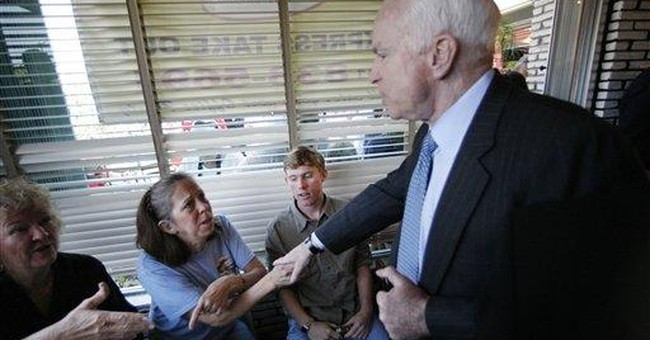 WASHINGTON, D.C. -- Conservatives and party regulars were not happy about the selection of Carly Fiorina to head the Republican National Committee's "Victory 2008" campaign raising funds for the presidential election. She was one of the nation's most visible CEOs before she was fired by Hewlett-Packard in 2005 for not generating enough profits.

Federal Election Commission records show Fiorina contributed nothing to the Republican Party the last eight years. Her only political giving was to Sen. John McCain's presidential campaign -- $2,100 in 2006 and $2,300 in 2007. Fiorina was at McCain's side when he campaigned in the critical Michigan and Florida races.

Fiorina has no standing in the conservative movement and has taken no position on the abortion question.

Mark Penn, Sen. Hillary Clinton's embattled chief strategist, angered his critics by taking credit for her comeback in Tuesday's primaries. Penn said the "3 a.m." television ad that he conceived was the "tipping point." In fact, it never was shown in Ohio, where Clinton defeated Sen. Barack Obama decisively.

The ad contrasted Clinton's and Obama's experience in national security, by portraying her ability to take an emergency telephone call at 3 a.m. It was broadcast widely in Texas, where Clinton narrowly edged Obama in the popular vote.

Clinton's big win in Ohio, the main force behind her comeback, was fueled by Democratic voter opposition to the North American Free Trade Agreement (NAFTA). Clinton got a boost there when it was reported that University of Chicago professor Austan Goolsbee, Obama's economics adviser, reassured Canadian officials not to take seriously his candidate's opposition to NAFTA. Democratic insiders call Ohio the "Goolsbee primary."

Democrats were getting ready for a do-over Florida Democratic presidential primary in mid-June, when the state's Republican governor, Charlie Crist, changed signals Thursday. He indicated in separate interviews on Fox and CNN he would rather seat delegates elected in the virtually uncontested Jan. 29 Florida primary, won by Hillary Clinton.

Eyebrows of Florida Republican activists were raised last Sunday when Crist went on CNN to say he would go along with a do-over of the Jan. 29 voting, held one week early in violation of Democratic National Committee (DNC) rules. But Republicans fear a re-vote would be won by Sen. Barack Obama, who they consider a tougher opponent of Sen. John McCain than Clinton.

A footnote: Michigan also conducted a DNC-prohibited primary on Jan. 15, where Clinton's was the only name on the ballot. A Michigan re-vote would be a "firehouse primary," conducted by the state party rather than the state government, and Florida also might take that course.

Vice presidential support has arisen for former Pennsylvania Gov. Tom Ridge, as it did eight years ago, and again caused consternation in the pro-life movement and among conservative Catholics. Speculation about Ridge, a pro-choice Catholic, for vice president in 2000 caused a furor. Catholic Bishop Donald Trautman in Ridge's hometown of Erie, Pa., barred him from speaking at Catholic events in northwestern Pennsylvania because of his position on abortion.

Ridge is a supporter and friend of McCain and, like him, is a decorated Vietnam combat veteran. His value on the national ticket would be trying to dislodge Pennsylvania from the Democratic grasp.

Once Sen. John McCain clinched the Republican presidential nomination in Tuesday's primaries with a puny treasury, he was off to Florida to start a week-long fund-raising tour.

McCain began Wednesday night at a private home in Gulf Stream, Fla. He went to Naples for luncheon Thursday at the Ritz-Carlton Golf Resort.

McCain was off to the Westin Buckhead in Atlanta Thursday night, to be followed the coming week with events at the Hilton St. Louis Frontenac Monday, the Plaza in New York City Tuesday, the Taj Hotel in Boston Wednesday, the West Shore Country Club in Camp Hill, Pa., Thursday noon, the Rittenhouse Hotel in Philadelphia Thursday night and the Hilton Chicago Friday.