Robert Knight
|
Posted: Mar 22, 2017 12:01 AM
Share   Tweet
The opinions expressed by columnists are their own and do not necessarily represent the views of Townhall.com. 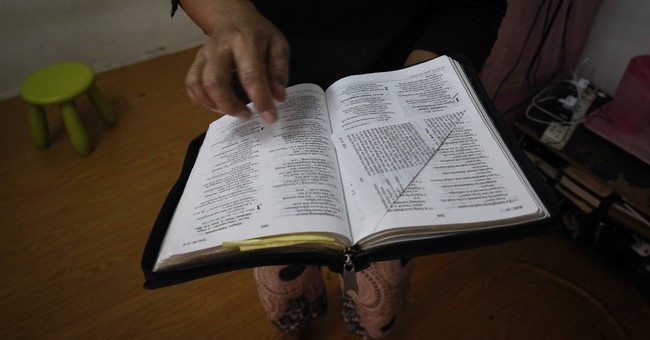 On Feb. 2, at the National Prayer Breakfast, President Trump said, “My administration will do everything in its power to defend and protect religious liberty.”

Right now, he has a golden opportunity.  He can sign an executive order that has been on his desk since early February that would halt some of the ongoing attacks on religious conscience all over the country.

The directive, reportedly called “Establishing a Government-Wide Initiative to Respect Religious Freedom,” would protect religious organizations’ right to their mission and beliefs when contracting with government, provide conscience protection from the Obamacare abortifacient and contraceptive mandate, and protect from penalties or coercion anyone who believes marriage is the union of one man and one woman.

But did you hear about the law signed on September 30th by California Gov. Jerry Brown that singles out religious colleges?   They have to jump through hoops that other institutions are spared, simply because their beliefs are suspect in the eyes of the government.

An earlier draft would have victimized mostly minority students by barring Cal Grants to schools that failed to fly the flag of sexual anarchy.  Public outrage killed this provision, but the law is still abhorrent – and unconstitutional.

“SB 1146 puts government in charge of religion, judging what is sin, love, moral, biblical, or proper,” says Randy Thomasson, president of SaveCalifornia.com, a pro-religious liberty group. “[It] begins the process of government taking over religion, a very dangerous precedent in a free society.”

Government red tape is already a nightmare for businesses and schools, but SB 1146 puts the religious-based institutions in the sixth circle of the bureaucrats’ version of Dante’s Inferno. That’s the place reserved for heretics, and, make no mistake, that’s how progressives in California see Bible-believing Christians.

The law’s anti-privacy provisions “would force California’s religiously-affiliated colleges and universities to report four times a year on every expulsion and suspension of a student, and the reasons for the discipline,” according to the Becket Fund.

The law also requires “religious colleges to use government-dictated language to communicate their religious beliefs to their students, faculty, and communities,” Becket warns.

If that sounds more like North Korea than sunny California, it should.  This is communist in spirit and substance.

In Madison, Wis., a city ordinance forces creative professionals to promote beliefs with which they disagree or face penalties.  On March 7, Alliance Defending Freedom (ADF) sued the city on behalf of photographer/blogger Amy Lynn, who says she conducts her business only in ways that glorify God.  This means she thinks that marriage is the union of the two sexes and that abortions take human lives, and she reflects this in her blog posts and her provision of client services.

ADF attorneys note that the law is so broad and absurd that a Madison-based speechwriter who opposes President Trump could be punished for refusing to write a speech for him.

In Phoenix, Joanna Duka and Breanna Koski, who met at a Bible study, decided in January 2015 to open Brush & Nib Studio, creating hand-drawn art for weddings and businesses. Six months later, the Supreme Court legalized same-sex “marriage,” unleashing an avalanche of legal tools to crush Christian businesses under the heel of “tolerance.”

A Phoenix ordinance could require Brush & Nib to create invitations and other art for same-sex ceremonies. The law forbids them from explaining to customers and the public why they choose not to create art that violates their beliefs. If charged, for every day they defy the law, they’d be fined $2,500 and face six months in jail.

In March 2015, the Wyoming Commission on Judicial Conduct and Ethics accused Ruth Neely, a municipal judge and part-time circuit court magistrate, of judicial misconduct and recommended sacking her from both positions. Her crime? She told a reporter that she believes in traditional marriage and so she could not preside over same-sex ceremonies.

As the ADF, which represents her, points out, “Judge Neely has never been asked to solemnize a same-sex marriage, no law requires magistrates to serve as a celebrant for any marriage, magistrates may decline to perform weddings for a host of secular reasons, and Judge Neely has an unblemished record of integrity, impartiality, and scrupulous compliance with the law in her more than 21 years of judicial service.”

There are many more incidents of harassment against people of faith, including several cases in the armed forces, which still harbor leftover Obama apparatchiks intent on weeding out Christians.

But let’s move on to solutions.  President Trump should sign the executive order guaranteeing religious freedom.  He should also overturn Mr. Obama’s order that discriminates against federal contractors who won’t bow to sexual anarchy.  And, his new Defense Secretary, James Mattis, should issue a directive stopping cold the persecution of chaplains and others who are trying to live out their faith.

Given Mr. Trump’s own declarations and the support he received from evangelical Christians, 80 percent of whom voted for him, plus a majority of Catholics, none of this should be considered heavy lifting.

Besides, putting bullies in their place (Hollywood, the media) is actually quite freeing.