Robert Knight
|
Posted: Feb 23, 2016 12:01 AM
Share   Tweet
The opinions expressed by columnists are their own and do not necessarily represent the views of Townhall.com. 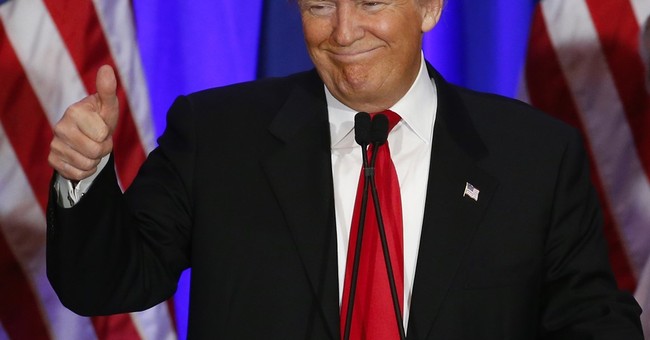 What do most Republican presidential candidates have in common with dozens of Christian, pro-family and patriotic organizations?

The cover has a large picture of an open-mouthed Donald Trump, under whom are a masked terrorist, the Islamist San Bernardino mass murderers, other hate crime suspects, a Nazi Swastika, columnist Ann Coulter, Center for National Security President Frank Gaffney, and, of course, the Confederate battle flag.

“Even as more establishment Republicans held back from most criticism, Trump and other candidates increasingly injected real hate into the electoral contest,” the report claims.

A montage of photos of GOP candidates – Ted Cruz, Marco Rubio, Ben Carson, Chris Christie, Jeb Bush and Mike Huckabee – makes them look crazy or mean. In 2014, the SPLC published an “extremist file” on Dr. Carson before removing it under heavy criticism.

Situated in Montgomery, Alabama, the SPLC long ago gained a reputation for tracking the Klan, Aryan Nations and other hate groups. The U.S. Justice Department and other government agencies rely on the SPLC to identify extremist groups, and the media cite it regularly as an “objective” source.

Armed with $300 million in assets, it has degenerated into a progressive bully that incriminates conservatives by association and even seeks to destroy groups that don’t share its progressive ideology.

Last year, its army of lawyers crushed Jews Offering New Alternatives for Healing (JONAH), a small group in New Jersey that referred clients to counselors who assist people in overcoming same-sex temptations. In a kangaroo court, in which the liberal judge barred all of JONAH’s expert witnesses and openly sided with the SPLC, a jury ruled that JONAH committed consumer fraud. Faced with exorbitant legal fees, JONAH agreed to shut down, a victim of the SPLC’s war on choices with which they disagree.

The SPLC‘s new, 69-page report claims that the nation is awash in hate groups, with a 14 percent increase in 2015 over the year before, rising from 784 hate groups to 892. The number of dangerous “anti-government patriot groups” rose similarly from 874 to 998.

Along with skinheads, black nationalists, and white nationalists who peddle racial hatred and animus toward immigrants, the SPLC includes groups that oppose same-sex “marriage,” promote the natural family, or oppose radical Islamists or illegal immigration.

Here’s an example of the SPLC’s technique of guilt by association:

“The U.S. House of Representatives took up a bill to end the resettlement of refugees, riding a wave of fear after the San Bernardino attacks. And others joined that anti-Muslim parade, ranging from Christian Right groups such as the American Family Association to the Klan.”

Get that? The AFA, a pro-family Christian media ministry founded by Methodist minister Don Wildmon, is in the same league as cross-burning Klansmen.

If you’re a doctor who belongs to the American College of Pediatricians, which was formed to counter the uber-politically-correct American Academy of Pediatrics, congratulations. According to the SPLC, you are in a “hate group.” That’s because your group publicizes research showing that mother-and-father families are the optimal environment in which to raise children.

The SPLC singles out the Rockford, Illinois-based Howard Center and its partner organization, the World Congress of Families (WCF), for special attention.

The report labels the WCF, which had its most recent conference in October in Salt Lake City and will hold its next conference in Tbilisi, Republic of Georgia, in May, “a hate group with international reach that promotes the ‘natural family.’”

Given the SPLC’s contention that the advocacy of certain stances incites hate violence, one might think they would consider taking such non-hate groups as Family Research Council and the World Congress of Families off their “hate map.”

This year, the SPLC not only left FRC on the map but added more Christian and conservative groups.

“All hate groups have beliefs or practices that attack or malign an entire class of people,” the SPLC explains in the report.

Given its equation of conservative views with extremism and hatred, the SPLC is maligning tens of millions of Americans. That just might make the SPLC itself the biggest hate group of them all.

Gee, I Wonder Why Most People Are Shrugging Off Omicron?
Townhall
'Did ... did he just say this?' Joe Biden's little joke about how much time he spends with Dr. Anthony Fauci raises more than a few eyebrows [video]
Twitchy
AOC Attacks Brett Kavanaugh but Gets Laid out by Tara Reade
Redstate
40 Years Ago, Monty Python Predicted (and Mocked) Wokeness
PJ Media