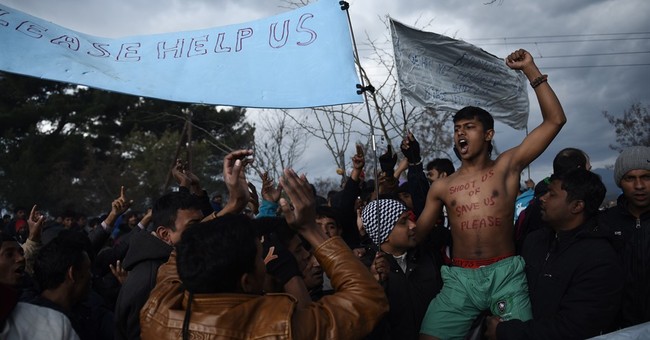 If, as Franklin Roosevelt said, “the only thing we have to fear is fear itself,” we might have to redefine “fear.”

To the progressive Left, “fear” means taking common-sense precautions to protect our citizens, such as the House’s 289 to 137 vote on Thursday rejecting President Obama’s Syrian refugee plan.

The American Civil Liberties Union (ACLU) has assailed the more than 30 governors who don’t want Syrian migrants placed in their states, accusing them of “fear mongering.”

In a press statement, the ACLU said that, “For more than 75 years, the Supreme Court has made it clear that the federal government has fundamental control over establishing our national immigration policy and states cannot create a patchwork of different policies.”

Really? Then why does the ACLU support “sanctuary cities” that won’t assist the federal Department of Homeland Security in enforcing immigration law?

On Oct. 20, the ACLU crowed that it was a “leader in a broad coalition” that helped block via a 54-45 Senate cloture vote a bill halting funding to over 350 “sanctuary cities” that refuse to cooperate with federal authorities.

Whether it’s tens of thousands of “unaccompanied minors” at the southern border, or shiploads of migrants from the Middle East, the progressive drumbeat is more, more, more.

It’s all part of fundamentally transforming America through mass, multicultural immigration that will swamp social services, followed by the creation of millions of new “citizens” who support progressive candidates and causes.

The Washington Post, whose scribes reflexively paint America as a bigoted place needing adult supervision from the United Nations, ran a piece last Wednesday reminding us that a majority of Americans in the 1930s opposed accepting Jews who were fleeing the Nazis.

Well, that was bad, but the comparison is nonsensical. Jews did not then nor have now a subset of radicals threatening to blow up American cities. What was xenophobia or anti-Semitism in the ‘30s is not remotely like being cautious about importing a fifth column of Islamists that will undermine our freedom and security.

But terrorism is not the only reason to bar mass numbers of Muslim immigrants. As Europe is finding out, most of these immigrants refuse to assimilate, and pose a growing threat to the host countries, whose cultures are based on Christian notions of human rights.

Author William Federer summarizes the problem we face trying to balance compassion toward refugees from Muslim lands and our own survival as a free people:

As Mr. Federer chronicles in his book What Every American Needs to Know about the Qur’an: A History of Islam and the United States, the Constitution is utterly incompatible with Islam’s main texts – The Qur’an and the Hadith.

Numerous verses prescribe the death penalty to “infidels” who refuse to convert to Islam, which means “submission to Allah.” For Muslims who convert to other religions, the penalty is also death. Both Muslim texts relegate Christians, Jews and other non-Muslims as “dhimmis” (second-class citizens). Although official dhimmitude has ceased in many Muslim countries, the vast majority do not respect basic rights – especially for women – that Americans take for granted, such as driving, voting or owning property.

After years of immigration from North Africa, the Paris metro area now has “No-Go” zones where French police won’t dare enter, and women caught without head scarfs are beaten—or worse.

In Muslim countries, Sharia means second-class status for non-Muslims with discriminatory taxes and religious suppression. At worst, it means brutal persecution, including rape, slavery and executions, sometimes by crucifixion, as we are seeing Christians suffer in areas controlled by the Islamic State or by Boko Haram in sub-Saharan Africa.

Speaking of Christians, scores of ancient church-based communities in Iraq and Syria are being wiped out. Yet President Obama ignores the ongoing genocide and instead welcomes exponentially more Muslim refugees.

Shouldn’t this bother all those pastors who reflexively support Obama no matter what he does? Secretary of State John Kerry said the administration wants to bring in 185,000 refugees through 2017, including 10,000 from Syria. If Europe is any indication, as the Washington Times’ online editor Monica Crowley noted in a recent column, the vast majority of such migrants will be young Muslim men, not families, as part of a hijra, or conquest through migration.

Republican presidential candidates such as Donald Trump, Ben Carson, Ted Cruz and Jeb Bush opine that America’s refugee policy should favor Christians, who not only face genocide but share American cultural values. Rick Santorum argues that we should resettle all such refugees in the Middle East instead of aiding the would-be Caliphate in cleansing the area of Christians. Either way, Christians are not the problem.

"There is no meaningful risk of Christians committing acts of terror,” Cruz said. “If there were a group of radical Christians pledging to murder anyone who had a different religious view than they, we would have a different national security situation."

The progressive Left, with the ACLU leading the pack, has excoriated these common-sense observations as “fear mongering” and “bigotry.”

Will we be allowed to respectfully disagree a few years hence if current trends continue?