Pushing Back Against the Federal Leviathan 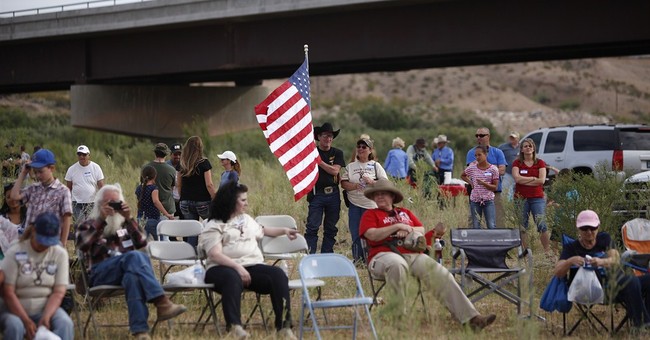 Anyone worried about the rapidly growing power of the federal government under President Obama and the militarization of federal law enforcers had to take heart last week.

It was quite a sight when hundreds of citizens, many of them on horseback, converged near the Mesquite, Nevada ranch of Cliven Bundy in reaction to the federal government’s massive show of force against the cattleman.

At issue is Mr. Bundy’s refusal since 1993 to pay for federal permits to graze his cattle on land, some of it designated as protected for the desert tortoise. Mr. Bundy’s family had grazed cattle in the area since homesteading in 1877, and he insists that the land is owned by the state of Nevada, not the federal government, which now manages 87 percent of land in the Silver State. Mr. Bundy will pay Clark County for permits, but not a dime to the feds, who he says wrongly took the land.

The problem is not the legality of Mr. Bundy’s actions. He might eventually win his case, but he’s already lost in federal court. The real problem is the Obama Administration’s overreaction. The Bureau of Land Management (BLM) sent a helicopter and a huge force of armed men in riot gear, including snipers, who seized hundreds of Mr. Bundy’s cows and set up a small “free speech zone,” outside of which someone could be arrested for speaking against the federal action. Neighbors say the feds destroyed property and shot two of 76-year-old Mr. Bundy’s prize bulls.

Now, here’s where the plot thickens.

On April 8, during the BLM’s round up of Mr. Bundy’s cattle, the U.S. Senate confirmed Neil G. Kornze as head of the BLM by a vote of 71-28 – including 15 Republican “yes” votes. Before his stint as principal deputy director of the BLM, Mr. Kornze worked for Senate Majority Leader Harry Reid (D-NV) on “public lands issues,” according to the Washington Post, which noted that the 35-year-old Kornze will be overseeing 264 million acres of public lands, mostly in Western states.

Nevada is to questionable federal land deals what New Jersey is to mob-related “accidents.” Last May, a federal jury found Harvey Whittemore, one of Harry Reid’s close friends and biggest donors, guilty of making illegal campaign contributions to Mr. Reid in 2007. Mr. Whittemore was sentenced in September to two years in federal prison.

In 2004, Mr. Whittemore benefited from a land use bill sponsored by Mr. Reid that gave him an easement needed to build a retirement community, Coyote Springs, 60 miles northeast of Las Vegas, according to the Los Angeles Times. Since 2000, Mr. Whittemore had donated $45,000 to Sen. Reid’s campaign and a Reid-run political action committee, and two of Mr. Reid’s sons worked for Mr. Whittemore. All four of Mr. Reid’s sons at one time have worked for the law firm at which Mr. Whittemore is a senior attorney. The project was delayed until the BLM did a land swap to relocate a habitat for desert tortoises, which have been designated as an endangered species.

Reid spokeswoman Kristen Orthman dismissed what she called “conspiracy theories,” telling KLAS-TV in Las Vegas that the ENN project is more than 100 miles from the Bundy ranch. Another solar project whose ground-breaking Mr. Reid attended is closer – about 35 miles from the ranch, according to KLAS.

Let’s stop and examine several fascinating aspects. First, the citizens’ armed response in support of the 76-year-old father of 14 may have prevented a replay of the Ruby Ridge siege in northern Idaho in August 1992 that resulted in the deaths of Randy Weaver’s wife Vicki, his son Sammy, and Deputy U.S. Marshal William Francis Degan.

It may have prevented another massacre like that of the Branch Davidians in Waco, Texas, after a 51-day siege following a gun battle on Feb. 28, 1993, when four Bureau of Alcohol, Tobacco and Firearms agents and six cult members were killed. The FBI-led assault on the compound on April 19, 1993 with tanks and tear gas resulted in 74 more followers of cult leader David Koresh, including 25 children.

In Nevada, a better scenario has unfolded – so far. The BLM backed off and returned some cattle to Mr. Bundy. Negotiations are underway. But Sen. Reid told Reno TV station KRNV that, “We can’t have an American people that violate the law and just walk away from it. So it’s not over.”

If only Mr. Reid felt that way about the lawlessness of the EPA and IRS, or the Justice Department’s bizarre behavior under Eric H. Holder, Jr.

Let the record show that Mr. Reid did refrain from accusing Mr. Bundy of being in cahoots with “the billionaire Koch brothers.”

Second, the incident shows the danger of allowing the federal government to become so powerful. As Ronald Reagan observed, “Government's first duty is to protect the people, not run their lives.”

Third, the involvement of people close to Harry Reid cries out for an inquiry, and perhaps more. Nevada has a law allowing recall of “every public officer in the state.” Nevada’s Secretary of State issued a 1977 opinion that the law doesn’t cover U.S. senators. But it’s never been court tested. Perhaps it’s time.

Tea Party leaders in 2010 launched an effort to recall New Jersey Democratic U.S. Sen. Robert Menendez for backing Obamacare. The petition drive was tied up in court until the New Jersey Supreme Court dismissed it as “moot” because Menendez ran for (and won) re-election in 2012.

Mr. Reid is up for re-election in 2016. For information on recall, see http://www.recalltherogues.org.