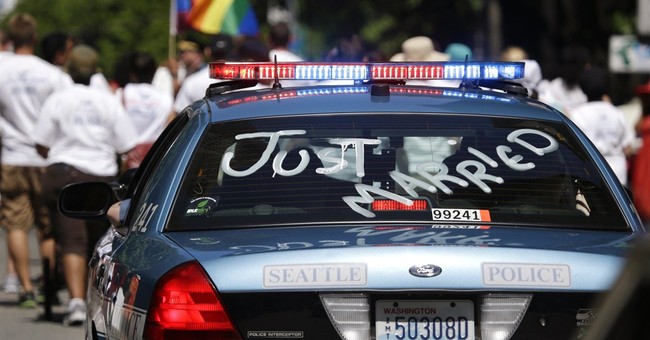 By accusing traditional marriage backers of being motivated only by animus against homosexuals, the U.S. Supreme Court has become the most prominent hate group in the country.

It’s hateful to defame people by falsely accusing them of bigotry. If you want to see how it’s done, check out the Southern Poverty Law Center, which has been defaming Christians for years.

Or read Justice Anthony Kennedy’s majority opinion in U.S. v. Windsor. It leaves little room for concluding otherwise that the 342 House members and 85 Senators who voted for the Defense of Marriage Act (DOMA) in 1996, plus President Bill Clinton, apparently were full of hate. So, too, is anyone who believes marriage is the union of one man and one woman, including a majority of North Carolina voters last year.

Tens of millions of Americans have voted to strengthen state marriage laws, including 31 constitutional amendments. The hate net is sagging at the seams with all those people in it.

If you think about it, the net includes all major religions and billions of people around the world who regard marriage as the union of male and female. It would include billions more if you counted all the generations before us. Who knew that marriage rested on so much hate?

Justice Antonin Scalia notes acidly in his dissent that Kennedy’s ruling, which includes a claim of judicial supremacy that Scalia calls “jaw-dropping,” means, “hate your neighbor or come along with us.”

In his majority opinion, Kennedy writes of DOMA, “no legitimate purpose overcomes the purpose and effect to disparage and to injure” homosexual couples.

In other words, the main purpose of DOMA is to demean homosexuals, not legally protect a unique, positive institution created by God and older than any government.

The Court didn’t quite declare same-sex “marriage” as a constitutional right, but it created the framework to accomplish that end. “By formally declaring anyone opposed to same-sex marriage an enemy of human decency,” Scalia warns, “the majority arms well every challenger to a state law restricting marriage to its traditional definition.”

In his own dissent, Justice Samuel Alito writes that accepting the plaintiffs’ key argument “would cast all those who cling to traditional beliefs about the nature of marriage in the role of bigots or superstitious fools.”

Proponents apparently knew the fix was in. The American Civil Liberties Union (ACLU) ran a full-page ad in the Wall Street Journal the next day, proclaiming jihad against the 36 states that aren’t in the “freedom to marry party.” As for the freedom of millions who disagree? Ah, well.

The jihad won’t stop with the same-sex counterfeit. If sexual complementarity is no longer a valid requirement, why should marriage be limited to two people?

Justice Kennedy has emerged as the most powerful man in America when it comes to advancing the gay marriage agenda and uprooting Judeo-Christian sexual morality. In 1996, he wrote the Romer v. Evans ruling that struck down Colorado’s voter-approved Amendment Two, which barred inclusion of the amorphous “sexual orientation” in state and local statutes. Clear-headed Coloradans had seen how such a term could be abused to distort civil rights and tried to head it off.

They ran into the buzz saw of a liberal judiciary, topped by Kennedy’s unctuous ruling accusing them of bigotry.

In 2003, Kennedy struck again. Citing junk science and foreign laws, he wrote the majority opinion in Lawrence v. Texas that vacated anti-sodomy laws. It helped that the state’s advocates didn’t bother making a public health case against behavior that still accounts for the lion’s share of new HIV infections in America and a host of other deadly illnesses. If you keep throwing away aces, don’t expect to win the poker game.

Wednesday’s related Hollingsworth v. Perry, a 5-4 ruling written by Chief Justice John (“I learned to love Obamacare, and you can too”) Roberts, denied standing for defenders of California’s voter-approved Proposition 8 constitutional marriage amendment. Instead of hearing the merits, they punted it back to the court where U.S. District Judge Vaughn Walker had struck it down.

By ducking the case, the Supremes managed to put another bullet into marriage, not to mention self-government. The takeaway: Any time an executive branch official disagrees with a constitutionally enacted law or amendment, the law is null and void. This means that governors, like the President, are now more like kings than public servants constrained by constitutional divisions of power.

The concept of self-rule is fast becoming only a speed bump to the ruling elites who are determined to refashion America into an updated version of Sodom. They will let nothing, certainly not state laws or the U.S. Constitution, get in the way.

Judge Walker, who is gay and thus should have recused himself, could find no societal reason for defining marriage as the union of one man and one woman other than “animus” towards homosexuals.

Walker’s ruling applies only to the Northern District of California, leaving the rest of the state’s law intact. This gives Southern Californians more incentive to push secession. For years, sensible Southland folks have wanted not to reside in a state represented in Washington by Nancy Pelosi or in Sacramento by Gov. Jerry “Moonbeam” Brown.

There would have to be a gerrymander, with Hollywood joining the north, but politicians are good at this.

I hope they can pull it off, but I wonder where the rest of us are going to live when mere belief in the biblical definition of marriage is grounds for civil action and eventually criminal prosecution?

It’s not as if we can trust the courts to give us justice.