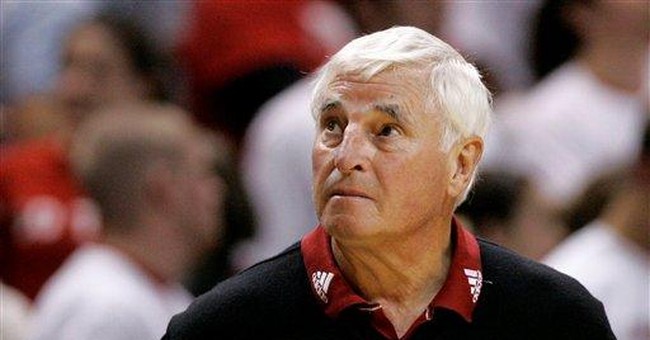 I’m often asked what I think of coach Bob Knight.

Usually, this happens after someone confuses me with him, which is kind of odd. He is at least an inch taller and has a head full of white hair.

Plus, he wears red shirts and sweaters, which is something I’ve never done. And, I’m always very polite to the press, even though I’m a media critic.

But since you asked, I’ll be blunt:

He’s a rough-hewn American original and one of the greatest coaches in history. Unlike many other coaches who treat their players as mere mercenaries, he insists on excellence on and off the court. This is why he has one of the highest percentages of players reaching graduation, and why so many of his former players speak highly of him.

I don’t like his profane ways or his lack of self control. Since he is in a leadership role, he could have set the kind of example we’ve seen in stand-up guys like Joe Gibbs, Tony Dungy and Cal Ripken. Gentlemen, but very tough gentlemen.

Let me stop here for a guilty confession. I’m glad Knight threw that chair across the court, because I have gotten a lot of mileage out of chair-throwing jokes. But it was bad. Bad, bad, bad.

And as far as his temper, well, it’s … bad. There’s no sugarcoating it. People ought to be able to visit a salad bar in Lubbock without seeing lettuce flying and celery snapping.

Still, with all of that, he is a great American. Neither the University of Indiana, where he won three national championships and coached for 29 years, nor the U.S. Military Academy, nor Texas Tech, from which he abruptly retired in mid-season yesterday, have been accused of breaking the rules. Knight draws players to his teams because they know they will be playing for a tough taskmaster, a proven winner, and a molder of character.

If players didn’t have character before joining one of Knight’s teams, they picked it up faster than a loose ball or were gone. Even the superstars knew who was boss. In 1984, he coached the U.S. Olympic team, manned by the likes of Michael Jordan, to a gold medal.

When Knight was feted on the court on January 1, 2007, after setting the all-time record for games won by a Division One basketball coach, he allowed us to see a different kind of Knight. He appeared surprised at himself for getting choked up, as if a guy with his kind of stick-it-in-your-eye attitude should never get all misty. He might also have been wondering, as three-time Super Bowl-winning quarterback Tom Brady did in a TV interview before this year’s game, “Is this all there is?”

I’ve winced over the years when my evil twin would get caught in a rant, or grab a player by the neck or do something else that made negative headlines. I’ve actually prayed that the Good Lord would shake him to his shoes and use all that raw talent and leadership to a far greater calling. And that could still happen.

But in a time of ultra-sensitivity, when real men are advised to be more like the ladies, a lot of us were thinking (to ourselves) that there goes one, untamed son of a gun, the kind that braved the Atlantic and settled the West.

Matt Gaetz Wonders If a Transition from Biden to Harris Is Already Underway
Townhall
OMG-LOL! Receipt-filled thread mocking #BlueAnon for each and every CRAZY conspiracy theory on the Left is an EPIC must-read
Twitchy
Kayleigh McEnany Reveals Why She Thinks Joe Biden Hasn't Held a Solo Press Conference Yet
Redstate
Rush Limbaugh's Death Certificate Boasts His G.O.A.T. Status in Epic Fashion
PJ Media