Robert Holland
|
Posted: Oct 17, 2016 10:42 AM
Share   Tweet
The opinions expressed by columnists are their own and do not necessarily represent the views of Townhall.com. 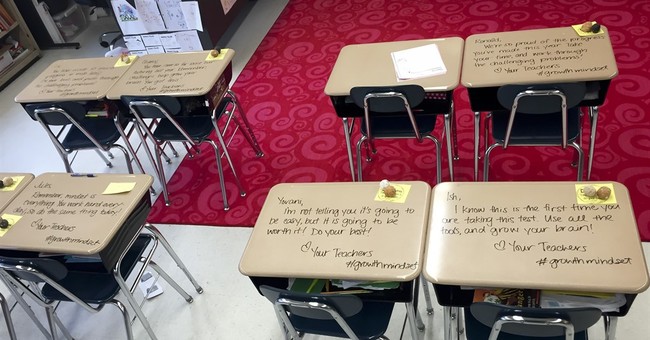 Carstarphen was touting her plan for having two local nonprofits manage charter schools to help inner-city families find alternatives to low-performing public schools. Her analogy, while clever, might suggest families would be happy if they had a choice of schools operating like fast-food chains. (It is also questionable how many Americans are thrilled with having Hillary Clinton and Donald Trump as their major-party presidential choices.) In reality, most parents want diverse and meaty options for their children’s education.

The latest evidence of that comes in a compelling study by the Indianapolis-based EdChoice that shows the outlook of Millennials on education compared with those of older generations.

Born between 1981 and 1997, America’s 75 million Millennials are the fastest-growing cohort of parents of schoolchildren, a demographic reality that will become even more obvious over the next decade.

The survey’s findings reveal Millennials favor all forms of school choice at a greater rate than older generations, which indicates demand for private and in-house public alternatives to government-assigned schools is bound to persist, no matter how the political winds may shift in Washington, DC.

Yes, the Millennial respondents also support quasi-independent charter schools by a strong majority (63 percent are in favor and 19 percent are opposed), but this generation that is so engaged with child-rearing also approves of vouchers for private school choice (61 percent to 23 percent, with the national approval average for all generations, young and old, being 56 percent).

The most significant finding of the EdChoice-commissioned survey by the respected Braun Research firm may well be that Millennials and Generation Xers (the cohort following the Baby Boomers) solidly supported the newest, most open-ended form of educational choice: education savings accounts (ESAs).

According to the survey, 57 percent of Millennials favor ESAs and only 21 percent oppose them. For Generation Xers, the margin of support was 53 percent to 27 percent. By contrast, only a plurality of Baby Boomers and members of the so-called “Silent Generation” favor ESAs (46 percent and 44 percent approval, respectively).

First launched in Arizona five years ago, the education savings account is just now compiling a track record, and it’s doing so while fending off court challenges by teacher unions, the American Civil Liberties Union, and other foes of parental choice. What makes an ESA the next step up from school vouchers—the Uber of education innovation—is parents may withdraw a significant portion of their per-pupil state subsidy and use it to choose from an array of educational services—such as tutoring, online classes, therapies, or tuition. It puts parents in charge and enables them to customize their children’s education.

ESAs are all about educational choice rather than simply school choice, and the level of support it already is gaining from today’s parents likely means it will soon become the preferred way of making education much more substantial than the cardboard-like hamburger it currently is.

Millennials’ desire to have a great variety of schooling options is at odds with current reality. Asked their preference of type of school for their children, 38 percent said they want a private school, 30 percent a public district school, 11 percent a charter school, and 12 percent said they like the option of homeschooling. By contrast, current actual enrollments break down this way: 83 percent public school, 10 percent private school, 5 percent charters, and 3 percent homeschools.

The study also indicated parents belonging to the sometimes-maligned Millennial generation often go to remarkable lengths to support their children’s education—i.e., changing jobs (18 percent), taking a second job (32 percent), moving closer to a school (26 percent), transporting their children to school (55 percent), and changing their daily routine in other ways to accommodate their kids’ schooling (41 percent). The researchers found Millennials “are often more likely than the average parent” to take such supportive actions.

Given their passion for education and for freedom of choice, this demographic cohort someday could be renamed the School Choice Generation.