Without This Option, School Choice Would Shrivel

Robert Holland
|
Posted: Apr 25, 2016 12:48 PM
Share   Tweet
The opinions expressed by columnists are their own and do not necessarily represent the views of Townhall.com. 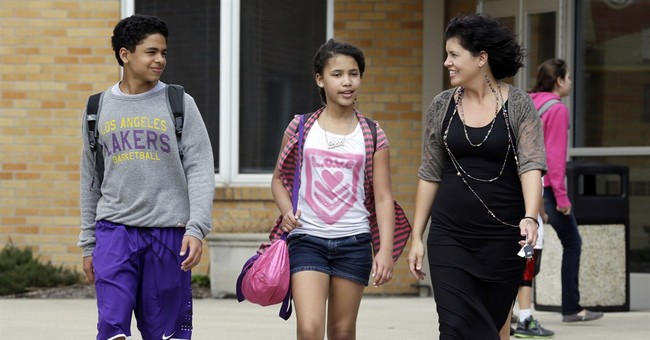 Would it be constitutional for a public school board to offer grants and scholarships to families wishing to choose private schooling, yet exclude those benefits for families who prefer for their children’s private school to be a religiously affiliated one?

That is a key question for jurists to sort out in an already complex school choice case that originated in Douglas County, Colorado—one that has taken so many twists and turns (the strangest coming in the past week) that it might eventually need a U.S. Supreme Court at full strength to settle.

Beyond the lawyers’ arguments over the Free Exercise Clause of the First Amendment and the anti-Catholic Blaine amendments—a 19th century relic still lurking in many state constitutions, including in Colorado—lies a practical consideration: Would private school choice be nearly as much a public good if patrons of religious schools were blackballed?

Extensive data collected by the National Center for Education Statistics in recent years fairly scream the answer: “No, it would not.” The statistics are available at the Council for American Private Education website, Capenet.org:

· Private schools account for 24 percent of the nation’s schools (many have fewer than 300 students) and 10 percent of enrollment in prekindergarten through high school, but 80 percent of all these private school students attend religiously affiliated schools.

· Eight in 10 parents of kids in religious schools report they are “very satisfied” with their child’s school. That compares with 56 percent of parents with children in assigned public schools, and 62 percent with kids in public charter or magnet schools.

· Close to half of private school students (43 percent) go to Catholic schools, while 20 percent attend non-sectarian ones. Nondenominational Christian academies are next at 14 percent, followed by Baptist, Lutheran, Jewish, Episcopal, Seventh Day Adventist, and Calvinist schools.

This statistical profile helps explain the reasons—which include academic excellence, wholesome values, discipline, and secure environment—so many parents would like to be able to choose a religiously oriented school. And it shows the value added for those enlightened public officials who realize that choice can shake up the system and make education better for everyone.

To its credit, the Douglas County Board of Education fully recognized the value of religious schools and made them an option when unveiling its groundbreaking program of school choice grants in 2011. Of course, that also made the scholarships a target of the American Civil Liberties Union and teachers unions, which want state courts to rule scholarship dollars, even those controlled by parental choice, violate state constitutions if any money winds up in parochial school coffers.

The Institute for Justice (IJ), a civil-liberties law firm, worked closely with the Douglas County Board of Education as its case experienced ups and downs within the Colorado judicial system. IJ also successfully advocated for the U.S. Supreme Court’s 2002 decision affirming the right of parents under the U.S. Constitution to use vouchers at whatever schools they deem best for their children.

After conflicting verdicts were delivered by lower courts, a sharply divided Colorado Supreme Court ruled in June 2015 the program fell afoul of the state’s Blaine amendment, which bars any public funding of religious entities. On March 15, the Douglas school board decided that a fifth of a loaf would be better than none at all and adopted a new choice program complying with the latest judicial verdict.

That decision brought about the most recent twist in this ongoing saga: an Institute of Justice lawsuit filed in the past week against its erstwhile ally, the Douglas County school board, on behalf of three families who wish to send their children to Valor Christian High School, which has won national recognition for its academic excellence.

In a statement, IJ Senior Attorney Michael Bindas sardonically observed, “The Douglas County Board of Education is now doing the very thing that it told the U.S. Supreme Court [in an appeal that’s still pending] is unconstitutional to do: excluding religious options from an otherwise generally available school choice program.”

Perhaps this rift will clarify the issue and hasten the day the Supreme Court finds unconstitutional all religious discrimination against parents who merely seek the best education for their children. If the verdict goes the other way, choice options will shrink dramatically.