Robert Charles
|
Posted: Nov 11, 2020 12:01 AM
Share   Tweet
The opinions expressed by columnists are their own and do not necessarily represent the views of Townhall.com. 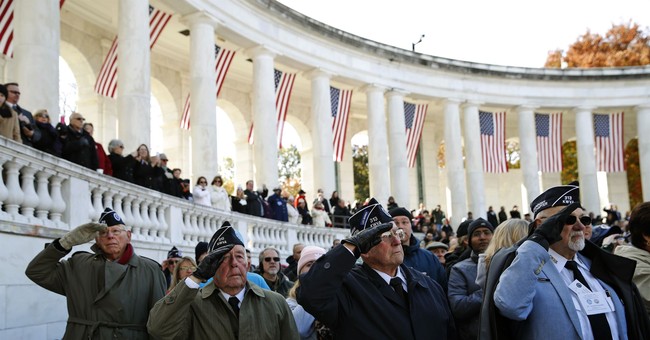 In the flurry of modern politics, remembering Veterans Day may seem unimportant. It is not. Remember with me.

Our democracy depends, in the end, on whether we believe enough in it - and in the freedom it affords - to defend it. America’s veterans – living and dead – have done that. Somewhere in the heart of each was the resolve, arrived at long ago, that America is worth dying for.

Under varying circumstances, with motivations from family to freedom, obligation to honor, each stepped up, took up arms, trained and – as needed – faithfully deployed.

The operative term is faithfully. What they did, in the quiet of their heart, is die to the world ahead of the need to do so.  What they did by signing up, following through with military service, is to put something ahead of themselves, go deep for meaning, commit themselves without reservation.

To what did they commit themselves? With gratitude and sacrifice, they committed to you and me. We top their list – together with love of freedom, of a kind unrivaled in human history.

On Veterans Day, remember that the world has only ever had one America. You and I, and our families, are blessed to live here.  The freedom we enjoy, always at risk, comes from veterans – those alive whom we honor today, and those who rest in places like Bunker Hill, Gettysburg, Meuse-Argonne, Anzio, Sicily, Cassino, Normandy, Bastogne, Iwo, Okinawa, the Solomon Islands, Arlington, and thousands of quiet, nameless spots around the globe.

So, beyond remembering and gratitude, what else is incumbent on us? What does the resolve of America’s veterans – to defend freedom, to die for it, to die for us – require of us?

Perhaps just this: That we honor them by never taking that freedom for granted, that we pray for them and preservation of that freedom, that we stand for, speak for, give, live, and work equal to the opportunities made possible by their resolve and that freedom.

Hard facts say it all. Seven percent of Americans are veterans. Those now in military uniform represent one-half of one percent of us.  Yet to these men and women, in the end, we owe all.

Ceremonies with honor guards on this Veterans Day are an important way of letting veterans, those of all wars, know that we know they signed up to give their lives, if needed, for us.

Another way of honoring them is by doing all we can – now and every day – to preserve the freedoms for which they fought, and to fruitfully use opportunities that freedom affords.

We seem to live in a time of social confusion, inordinate political strife, lack of appreciation for America’s goodness, greatness, and exceptional history.

On Veterans Day, let us be clear about one thing: The freedom to disagree, right to be what we can be, chance to sort out differences, comes back to the personal resolve of our veterans – that America is worth dying for.  Assuring that it is, and that it will stay that way – is our job.

Robert Charles is National Spokesman for the Association of Mature American Citizens (AMAC) a 2.3 million-strong, non-partisan group for Americans 50+, a former assistant secretary of state for President George W. Bush, a former naval intelligence officer and a litigator. He served in the Reagan and Bush 41 White Houses.