Rick Manning
|
Posted: Mar 11, 2022 12:01 AM
Share   Tweet
The opinions expressed by columnists are their own and do not necessarily represent the views of Townhall.com. 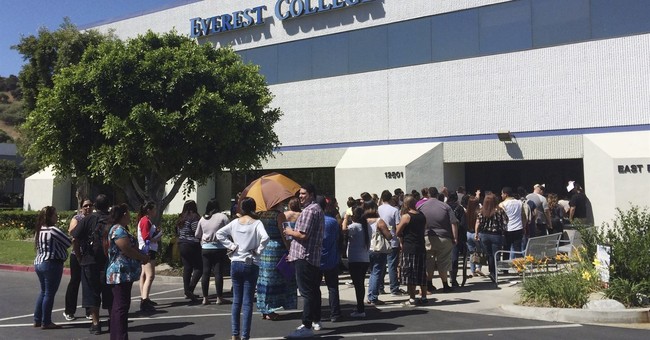 Just who decides policy at the White House isn’t clear. But after the President's latest flip-flop, certainly, President Biden does not call the shots. Scarcely a week had passed since the administration promised to end an almost– two–year-old moratorium on student loan repayments when the President reversed course and extended it through May. After a year of failing to pass substantive policies, Democrats want victories to make temporary policies permanent, even if it means abusing executive powers. This abrupt about-face can undoubtedly be attributed to pressure from his progressive base.

Democrats’ push for student loan cancellation is a simple political calculation led by progressives, such as Sen. Elizabeth Warren and Rep. Alexandria Ocasio-Cortez. They think the moratorium offers an expeditious path to achieving complete student loan forgiveness and a surefire way to keep the progressive base happy. This goal is popular with their college-educated and elite donors, who owe the most significant share of student loan debt.

Congress originally included the student loan moratorium at the peak of the pandemic in the CARES Act and the emergency program was intended to only last six months. It has since been extended five times even though almost every state has ended major coronavirus restrictions. Extensive prolonging will only make it more difficult for borrowers to meet their future financial obligations. Even senior Biden Administration officials have pushed to end the moratorium, but their voices were ignored because they opposed Biden’s activist base.

Since Biden started his campaign, special interest groups have pressured him constantly to address student loan debt. The American Federation of Teachers and MoveOn expected Biden to forgive student loans on his first day in office. While not capitulating to this demand outright, the President did not reject it, either. Instead, he bought himself time by ordering the Department of Education to study the issue.

Democrats are fighting so hard for the moratorium in 2022 because their congressional agenda has failed and they need a victory ahead of the midterms to solidify their government overreach. Democratic Members of Congress have introduced legislation that would forgive student loans, but these bills have stalled because members cannot agree on how to construct the policy. Democrats want to use executive orders to rubber stamp a stalled agenda as settled policy, bypassing the deliberative legislative process.

Rep. Cori Bush argues, "Forcing millions to start paying student loans again and cutting off the Child Tax Credit at the start of an election year is not a winning strategy."

Ending student loan repayments and expanding the Child Tax Credit might seem like good ideas for members, such as Rep. Bush, who won by almost 60 percentage points in 2020, but they won't be a winning message for members in competitive districts. A majority of Americans oppose efforts to enact blanket student loan forgiveness, and 59% of Americans believe that if any student debt is canceled, it must be canceled by Congress rather than by President Biden.

Additionally, Democrats often cite student debt’s impact on low-income Americans as proof that we must cancel student debt immediately. However, in their efforts to rid students of debt, Democrats would subject the entire country to a drastic increase in inflation. A recent report by the Committee for a Responsible Federal Budget (CRFB) shows that canceling student debt would increase the federal deficit by a whopping $1.6 trillion and increase inflation by as many as 50 basis points.

The rise in inflation would increase the price of basic goods and disproportionately affect low-income Americans. Considering that 4% of households below the poverty line are making payments on student debt, and that wealthy households hold significantly more debt than low-income households do, it is easy to see why the CRFB considers debt cancellation to be a regressive policy.

Democrats are desperately searching for a political victory for their elite liberal donors and radicalized progressive base, even if it means jamming through an unpopular policy by executive orders. Ultimately, this is a miscalculation and will cost Democrats seats come November. The American people see through President Biden’s charade.

Here's Another Narrative for Why the FBI Raided Trump's Mar-a-Lago Home. It's Still Absurd.
Townhall
So First Lady Jill Biden is not a fashion doctor and the internet has noticed, let the pouncing commence
Twitchy
Footage of John Fetterman Reveals a Man Who Is Not Alright
Redstate
The Morning Briefing: Biden's Revenge-Fest Isn't Going to Work Out Well for the Dems
PJ Media