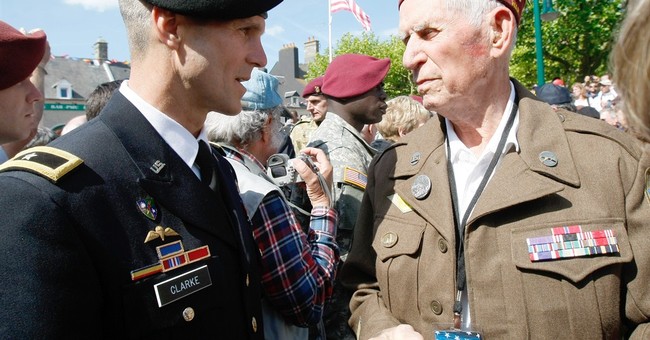 So far during the Obama years, the serial scandals have fallen into a familiar pattern:

2). The president insists he had no idea about the scandal.

From the IRS cracking down on Conservatives to the Justice Department tracking the phone calls made by reporters to the NSA data mining everyone’s e-mail to the “Fast and Furious” gun running story, each event has followed that pattern. But don’t expect the festering Veteran’s Administration scandal to do so.

Because the real scandal is that there is no VA scandal. In a perverted sense, the VA was working.

Let’s begin at the beginning. The Veteran’s Administration stretches back to the Civil War. It was founded, in Abraham Lincoln’s words, “To care for him who shall have borne the battle and for his widow, and his orphan.” That’s actually written on the outside of VA headquarters in Washington, D.C.

“President Lincoln affirmed the government’s obligation to care for those injured during the war and to provide for the families of those who perished on the battlefield,” the agency’s Web site explains. That’s a noble goal. But it doesn’t seem to be the agency’s mission anymore.

Rather than providing care for vets, the VA somehow switched its mission to seeming to provide care for vets. There’s a big difference.

As your grandfather probably told you, “you get what you pay for.” Well, look what the VA was paying its employees to do: make it seem as if they were providing health care to vets, whether they really did or not.

Until last fall, the VA was actively congratulating itself on a job well done. More than three quarters “of VA senior managers qualified for extra pay or other compensation in fiscal year 2013 by receiving ratings of ‘outstanding’ or ‘exceeds fully successful,’” CNN reports. “All 470 of them got ratings of ‘fully successful’ or better.”

Every single senior leader was fully successful. Even in Phoenix, where the VA had two lists: one for vets who were getting care, another for vets waiting (unofficially) to get care. The head of the Phoenix medical center took home an $8,500 bonus last year (it’s since been rescinded) and she is still earning a salary even though she’s on administrative leave.

Incentives work; our country got what it paid for, even as some two dozen vets died while waiting for health care they’d been promised.

A problem this large requires large changes. Instead of politics as usual, calls for investigations, etc., policymakers should think big.

The first step is to help the vets. Congress wanted to ensure that those who’ve served our country would have access to quality health care. So lawmakers should declare that, for the time being, any vet can see any doctor he needs to. Start at the VA, certainly. But if the people there say they cannot see you, you should be free to go to any hospital of health care facility. The federal government could provide vouchers to pay for such care.

This is, of course, open to manipulation. But we are talking about veterans, people who’ve put their lives on the line for our country. We can trust them to do the right thing and only use vouchers if they truly need to.

There’s no doubt this could be expensive. But consider the flood of wrongful death suits that could be filed in the months and years ahead by survivors of those vets who’ve already died while waiting for medical care. Providing vets the care they need (and thus keeping the promise we’ve made to them) could be far less expensive than settling lawsuits down the road.

In the long-term, the country needs a new approach. The problem with the VA is it got the incentives wrong. The VA’s phony lists were all about rationing. Instead, we need to get the bureaucracy re-focused on helping vets.

There’s no bureaucratic solution available. Instead, we need Congress to begin transitioning the VA toward consumer-centered care that’s responsive to markets. Such changes are a long way off. But it would be a scandal if we ignored veterans while waiting for them to occur.