Addressing the Founding, and Us 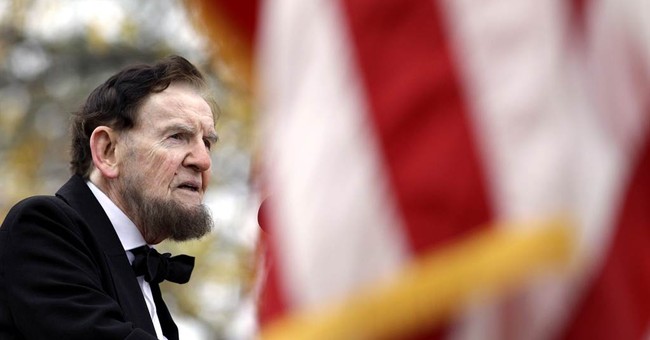 Ever since Abraham Lincoln delivered his stirring Gettysburg Address at that great battlefield in Pennsylvania 150 years ago, people have been parsing it. Almost immediately, Sen. Charles Sumner compared it to great Greek literature, a thought echoed by historian Garry Wills in our time.

But Lincoln’s words weren’t Greek to his audience, and they aren’t Greek to us. As historian Allen Guelzo explained recently, the address is an example of democratic speech, words aimed at his audience that they could easily understand.

The crowd gathered that day would have appreciated that the address was so short -- just 272 words -- especially after it had just listened to a two-hour-long stem-winder from acclaimed speaker Edward Everett.

Lincoln’s brief remarks must have been met with sighs of relief from many with tired ears that day. His genius was he was able to capture ideas and convey them with as few words as possible. And Lincoln was speaking of ideas that his listeners would understand. Lincoln’s message would have been heard by the crowd as a defense of democracy.

Today we all but take democracy for granted. There are democratic governments all around the world. And they, for the most part, work. But in the 1860s, government by the consent of the governed seemed doomed.

Guelzo says it was Otto von Bismarck’s idea that seemed to be on the rise. “Believe me, one cannot lead or bring to prosperity a great nation without the principle of authority—that is, the Monarchy,” the Iron Chancellor wrote to a colleague. Other Europeans rejoiced that the United States were tearing themselves apart in defense of slavery. The failure in the U.S. would prove for all time that democracy was, truly, mob rule.

But, in the battle of Gettysburg, those common people had done something amazing. They had left their farms, families and shops and marched as soldiers. They had defended the high ground, and repulsed Robert E. Lee’s vaunted invaders time and again. They had died in stunning numbers. There were an estimated 3,900 Union dead, 18,000 wounded and 5,400 missing, many buried in the cemetery Lincoln came to consecrate. They had proven that democratic citizens were willing to fight, and die, to preserve their country.

Lincoln also explained to his listeners that the Civil War was being fought to prove that, in the United States, “all men are created equal.”

That line seems so obvious to modern ears that it’s easy to overlook it. The fight for “equality” has been won so completely that today the concept mostly comes up when a boy wants to be allowed to use the girl’s bathroom. Otherwise, our arguments over inequality tend to focus on how racial preferences should be allocated, or for how long.

But, to insist that all men were created equal meant much more in 1863, when millions of men (and women) were still considered property, to be bought and sold by others. The war would put an end to this, Lincoln was saying, and thus complete the promise of the Declaration of Independence.

The crowd in attendance would also have understood that Lincoln was talking about putting an end to American aristocracy. In the southern United States before the war, there was a slave-owning class that was remarkably similar to Europe’s blue bloods.

This small group of people owned much of the land, but didn’t work on it themselves. Instead they owned slaves to do that. The middle-class farmers and shopkeepers of the Union, gathered at Gettysburg, would have understood that, if all men were truly equal, this aristocracy would need to vanish. Instead of a society based on land ownership, with title and power passed from one generation to the next, the U.S. would become a society based on opportunity, where the “pursuit of happiness” promised by the Founders would be available to all people.