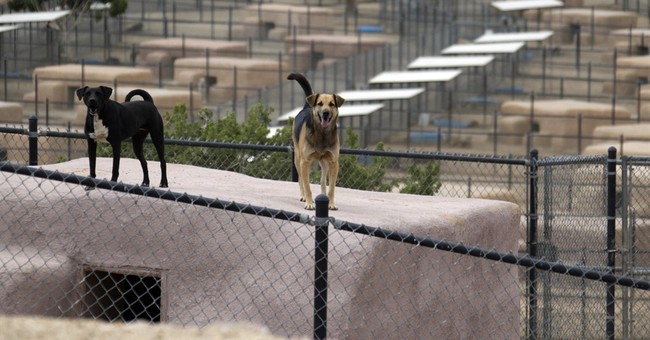 I recently began walking around my neighborhood carrying a bag and picking up animal waste. Which is to say, “we got a dog.” Or maybe she got us.

It has been several years since we had a pet. And it’s not as easy to get, or keep, a dog as it used to be. Time was, you waited until a neighbor’s dog had puppies and you took one home. That’s how literary heroine Emily Elizabeth got Clifford the Big Red Dog, for example. Not anymore.

Daisy is, of course, a “rescue dog.” Because every dog these days apparently has to be. And like the rest of American life, dog ownership has become amazingly bureaucratic.

Before you can rescue a dog now, you have to prove your family is worthy. Fill out forms. Host a home inspection. Visit a doggie open house at a warehouse in a somewhat dodgy section of town to meet the dogs. They are, of course, staying with “foster” families. If the dog seems to like you, and the volunteers agree, you can start negotiating to take her home.

Once you get the dog home, of course, you’ll probably need to hire a trainer. If you don’t, you’re sure to be stopped on every walk by busybodies with plenty of “advice” about how to treat the dog. Animals today apparently aren’t property, they’re adjunct humans.

In a recent survey by Psychology Today, four-fifths of dog owners “consider their dogs to be true family members, equal in status to children.” More than half of owners consider themselves “pet parents,” not “pet owners.” At the same time, these “parents” recognize that things were different in their own childhood. Almost two-thirds acknowledge that their current dog is more important than their childhood pets were.

“The reason for this change in status, with dogs becoming virtual children, is not directly addressed by the survey,” Stanley Cohen writes in Psychology Today. “It is likely however, that one reason might be because more North American couples are childless, or have fewer children.” Forget about leaving Fido at home while you go to work; you’d better be ready to provide a dog walking service if you’ll be gone for any length of time.

Life is better for American pets, in fact, than it is for many humans around the globe.

Atlantic magazine notes that’s more than we spent buying Starbucks and bottled water. Combined. Frighteningly, that’s more than the value of everything produced by everyone in Uruguay that year. The United States is wealthy beyond imagination. It’s a great place to be a dog, and an even better place to be a human.

For example, American pets can not only fly, some travel even better than first class. At least one company offers pets charter flights on private jets. When they pass on, many are buried in one of 700 pet cemeteries nationwide. Members of the family, indeed.

Of course, the trend in pets mirrors the trend in American life generally. Bureaucracy abounds everywhere. For example, where it used to be fairly easy to start and run a business, today’s entrepreneurs often find themselves tangled in reams or red tape. From ObamaCare to Dodd-Frank, from the EPA to the IRS, businesses large and small are being smothered in bureaucracy. No wonder the economy is struggling to add jobs.

So you’re free to spoil your dog. No harm there. For our part we plan to give Daisy plenty of TLC, even if she has to ride in the car instead of a plane. Still, she’s no child -- we’ve got enough of those already.

But there’s plenty we could do to make this a better country for humans. Let’s get to work cutting bureaucracy, and getting people back to work.