The Race to Spend has Begun 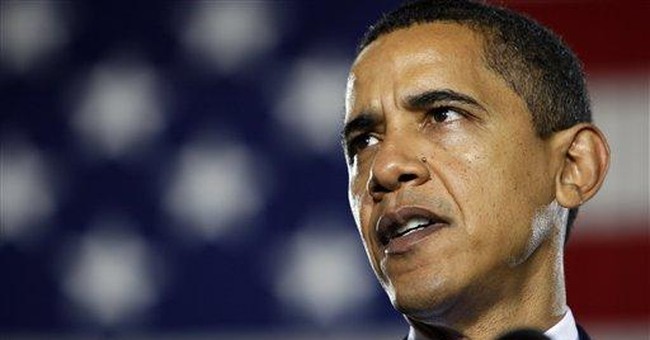 Right about now, the American people must be asking, “Can’t we just elect this Obama fellow and let him get on with the business of running the country?”

The president and his advisors were careful to point out that Tuesday’s speech wasn’t a State of the Union address, and that’s probably a good thing, since it didn’t seem like one. Instead of watching an elected president address Congress about his plans for the future, Americans could be forgiven if they thought they’d seen a mere candidate regale us with everything he intends to do once elected. Oh, and any details will come later.

“As soon as I took office, I asked this Congress to send me a recovery plan by President’s Day that would put people back to work and put money in their pockets. Not because I believe in bigger government -- I don’t,” Obama announced early in the address. “Not because I’m not mindful of the massive debt we’ve inherited -- I am.” But, he added, because the near trillion-dollar “stimulus” bill was critical.

What made it so necessary?

“We have lived through an era where too often short-term gains were prized over long-term prosperity; where we failed to look beyond the next payment, the next quarter or the next election,” President Obama announced. Well, fair enough. Americans overborrowed and overspent, especially on real estate. Few would doubt that. Sadly, Obama then gave a speech that hinted at levels of spending our government won’t be able to afford in the quarters and years ahead.

Just consider what he’s already asked for: close to a trillion in “stimulus.” $275 billion for housing. $634 for health care. A $3.55 trillion budget that would lead to a mind-blowing $1.75 trillion deficit this fiscal year. The hits just keep on coming. For someone who doesn’t want to grow the government, Obama’s doing a bang-up job.

Democrats in the House aren’t helping.

The day after Obama’s speech, Congress (voting mostly on party lines) approved a $410 billion domestic spending measure, one loaded with more pork than a Carolina hog farm. The advocacy group Taxpayers for Common Sense uncovered 8,570 earmarks at a cost of $7.7 billion. The more things “change,” the more they remain the same.

When Republicans complained about the pricetag, Rep. James McGovern, D-Mass., announced that, “the same people who drove the economy into the ditch are now complaining about the size of the tow truck.” Cute line, but it’s difficult to see how overspending today would make up for overspending in years past.

Unfortunately, Obama can’t even explain how the country got into this mess. “Regulations were gutted for the sake of a quick profit at the expense of a healthy market,” he said. Well, this is a line that goes back to the campaign. What regulations, exactly, were “gutted,” and who did the gutting? Obama has no answer.

The fact is, our current recession was caused at least in part by policymakers who pumped up the housing bubble in recent years. As economist Mark Zandi explains in his new book Financial Shock, “Many factors drove this housing binge, but the biggest was easy credit.” And that credit was a direct result of policies set in Washington.

After Sept. 11, 2001, then Federal Reserve Chairman Alan Greenspan slashed interest rates specifically to cause “a surge in housing activity,” Zandi writes. “The Fed chairman believed that although stocks and other financial assets might be prone to bubbles, housing was immune.” Oops. Since it was “the maestro” calling the shots, it seems unfair to blame the supposed lack of regulation on any Congress or administration that supposedly “gutted” regulations.

Obama added that, over the last few years, “critical debates and difficult decisions were put off for some other time or some other day.” Well, isn’t that exactly what his proposals do? Spend, spend, spend today. Claim you’ll “cut the deficit in half” in the years to come. Sure -- because the decisions to cut spending are only going to get easier in the years ahead, right?

As the cliché says, “to govern is to choose.” So far Obama is choosing to govern like a candidate. He provides plenty of grand plans, but few details. That’s a mistake. We’ve given Obama the job. It’s time for him to start acting presidential.