The Shame of the Chiefs 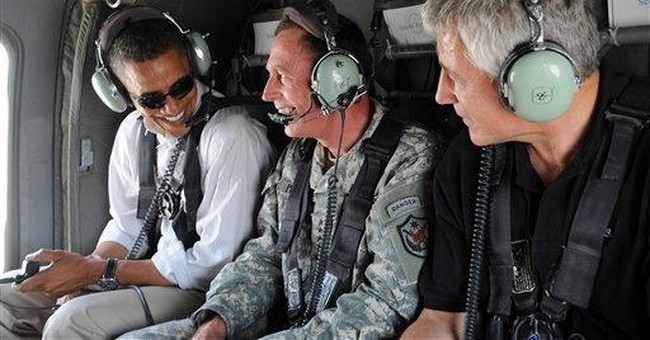 In his classic book on the Vietnam War, "Dereliction of Duty," H.R. McMaster excoriates the Joint Chiefs of Staff for acceding to President Lyndon Johnson's flawed war plan and his dishonest salesmanship of it. McMaster dubs them "the five silent men."

What adjective best describes the equally shameful conduct of the men of the Joint Chiefs during the Iraq War? "Silent" is the least damning of the possibilities.

In his latest insider account of the Bush administration, "The War Within," Bob Woodward provides a window into the cluelessness of the chiefs and their seeming disinterest in victory that will fascinate and appall students of civil- military relations for decades to come.

In 2006, it had become obvious to almost everyone that we were failing in Iraq, with the exception of top U.S. generals. The general in command on the ground, George Casey, and his immediate superior, the head of U.S. Central Command John Abizaid, were focused on U.S. troop withdrawals the way Mr. Dick in "David Copperfield" is focused on King Charles' head.

When President Bush told Gen. Casey in a trip to Baghdad in June 2006 that "we have to win," Casey replied, "But to win, we have to draw down." It remained his dogged mantra as Baghdad collapsed all around him.

The chairman of the Joint Chiefs, Peter Pace, commissioned a group of colonels to review war strategy for the chiefs. One of their presentations ended starkly, "We are not winning, so we are losing." Woodward writes, "Chairman Pace had an unusual sullen look on his face, almost crestfallen, as if to say, 'How could I not have realized this.'"

Good question. Secretary of Defense Don Rumsfeld had created an environment that valued convenient fictions over hard truths, and the chiefs hoped to muddle through with the Casey strategy so they could rid themselves of the Iraq War, and its strain on the military, as soon as possible.

President Bush had his own revelatory moment when in a meeting with military experts, retired Gen. Jack Keane told him, "We don't have a plan to defeat the insurgency." When Bush set about getting one -- the surge -- he had to do an end run around the chiefs.

He fired Rumsfeld, and replaced Gens. Pace and Abizaid. He kicked Gen. Casey upstairs to Army chief of staff in a foolhardy face-saving gesture. Casey had been pulled from the field in defeat, and a new strategy was implemented that -- should it succeed -- would expose the folly of his own.

Casey thought the surge was all about domestic U.S. politics. Adm. Michael Mullen -- the new chairman of the chiefs -- thought there was a conspiracy afoot to blame the loss of the war on the military. And Abizaid's replacement at CENTCOM, Adm. William Fallon, shared their dim view of the surge.

A bizarre multifront battle ensued, with the new commander in Iraq, Gen. David Petraeus, fighting against our enemies with the additional forces of the surge, and CENTCOM and the chiefs fighting against the surge. According to Woodward, "Fallon was determined to challenge the merit of every personnel request."

Keane, a mentor to Petraeus, became a back channel between Bush and Vice President Dick Cheney and the commander in Iraq. Keane warned Cheney, "The Joint Chiefs are more concerned about breaking the Army and Marine Corps than winning the war." When Bush gave Keane a message for Petraeus saying he'd have all the forces needed to succeed, Petraeus replied, "I wish he'd tell CENTCOM and the Pentagon that."

Astonishingly, Chairman Mullen told Keane, "I don't want you going to Iraq anymore and helping Petraeus." Mullen worried that Keane was undermining him, never mind that Petraeus -- who was fighting the war -- found Keane's counsel useful. It took interventions by Bush and Cheney to get Keane cleared again to travel to Iraq.

"Never ascribe to malice, that which can be explained by incompetence," Napoleon supposedly said. In this war, the chiefs have often made that seem a false choice.