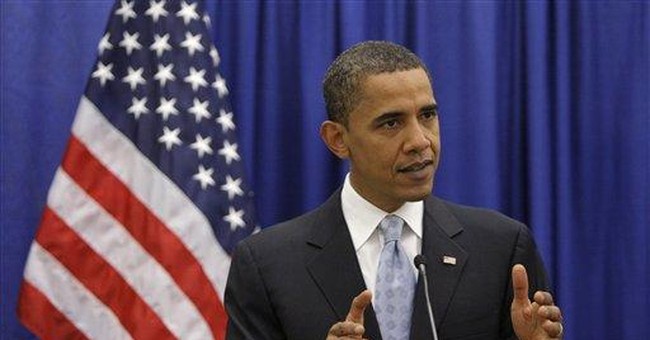 At some point, Democrats decided that facts didn't matter anymore in Iraq. And they nominated just the man to reflect the party's new anti-factual consensus on the war, a Barack Obama who has fixedly ignored changing conditions on the ground.

It's gotten harder as the success of the surge has become undeniable, but -- despite some wobbles -- Obama is sticking to his plan for a 16-month timeline for withdrawal from Iraq. He musters dishonesty, evasion and straw-grasping to try to create a patina of respectability around a scandalously unserious position.

Obama spokesmen now say everyone knew that President Bush's troop surge would create more security. This is blatantly false. Obama said in early 2007 that nothing in the surge plan would "make a significant dent in the sectarian violence," and the new strategy would "not prove to be one that changes the dynamics significantly." He referred to the surge derisively as "baby-sit[ting] a civil war."

Now that the civil war has all but ended, he wants to claim retroactive clairvoyance. In a New York Times op-ed laying out his position, Obama credits the heroism of our troops and new tactics with bringing down the violence. Our troops have always been heroic; what made the difference was the surge strategy that Obama lacked the military judgment -- or political courage -- to support.

In his op-ed, Obama states that "the same factors that led me to oppose the surge still hold true," citing the strain on the military, the deterioration in Afghanistan and the fiscal drain. All of those are important, but pale compared with the achievement in Iraq -- beating back al-Qaida and Iranian-backed militias, and restoring a semblance of order to a country on the verge of a collapse from which only our enemies could have benefited.

Politically, Obama has to notionally support defeating al-Qaida in Iraq, so even after he's executed his 16-month withdrawal, he says there will be a "residual force" of American troops to take on "remnants of al-Qaida." How can he be so sure there will only be "remnants"? If there are, it will be because the surge Obama opposed has pushed al-Qaida to the brink. The more precipitously we withdraw our troops, the more likely al-Qaida is to mount a comeback.

Obama treats as a vindication a recent statement by Iraqi Prime Minister Nouri al-Maliki calling for a timeline for withdrawal of U.S. forces. But Maliki, playing to his domestic politic audience, can't be taken at face value. Neither Maliki nor anyone around him talks of an unconditional 16-month timeline for withdrawal as being remotely plausible. His defense minister says Iraqis will be ready to handle internal security on their own in 2012 and external security by 2020.

The Iraqis most enthusiastic about Obama's plan surely are al-Qaida members, Sadrists, Iranian agents and sectarian killers of every stripe. The prospect of an American president suddenly letting up on them has to be the best cause for hope they've had in months. Obama's withdrawal would immediately embolden every malign actor in Iraq, and increase their sway in Iraqi politics.

In his op-ed, Obama sticks to the badly dated contention that Iraqis "have not reached the political accommodation that was the stated purpose of the surge." In fact, roughly 15 of 18 political benchmarks have been met by the Iraqis -- progress Obama threatens to reverse.

Obama loves to say that we have to withdraw from Iraq "responsibly." There's nothing responsible about his plan. According to U.S. commanders on the ground, it may not even be logistically possible. Does Obama even care? He says that when he's elected he'd give the military a new mission -- to end the war. Conditions in Iraq, let alone winning, are marginalia.

There are two possible interpretations -- either Obama is dangerously sincere, or he's a cynical operator playing duplicitous politics with matters of war and peace. Watch this space.