To Take A Village 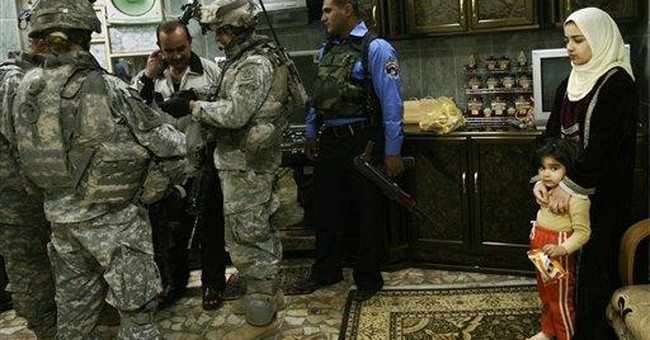 HAMADAH, Iraq -- This small, rural village in the Diyala Province north of Baghdad experienced a revolution a month ago. It had been controlled by al-Qaida and its band of teenage killers who terrorized the place. The mayor of the nearby city of Muqdadiya lived here -- until al-Qaida blew up his house and he fled. The village became a ghost town.

Then, for the first time in five years of war, U.S. troops showed up. They captured key al-Qaida leaders, and the rest ran away. Local citizens formed a makeshift security force, and people returned to the streets. Suddenly, it was a new day.

"I told everyone this is a golden opportunity," says Hassen Nssaif Jasim, a retired lieutenant colonel in the Iraq army who leads the local security volunteers. "Don't lose it."

Isolated towns like this one, with a population of 750 and a dirt road as the main thoroughfare, are highly vulnerable to al-Qaida. "It's easy to intimidate them," explains an American officer. "They get up in the morning, and there are a bunch of heads in the soccer field."

Gen. Mark Hertling, who commands American forces in the north, recalls being introduced in the village of Himbus to a 12-year-old girl who had pointed out where the al-Qaida thugs were hiding. "I asked her why she had done that," Gen. Hertling says, "and she said, 'They killed my two brothers, my father couldn't farm, and I couldn't go to school.'"

It would still be that way without U.S. forces. Iraq is a mind-bogglingly complex country that defies generalizations, except this one -- where U.S. troops have a substantial presence, there is more security, more grass-roots political ferment and more economic activity.

This swath of Iraq north of Baghdad has long been an "economy of force" operation -- in other words, undermanned. Even as the biggest city, Mosul, sank into chaos in 2005, the American force wasn't increased. At the beginning of the surge, it lost troops to the fight to secure Baghdad. One battalion -- 600 troops -- had responsibility for a city of nearly 2 million.

Increasingly squeezed out of Baghdad and Anbar province to the West, al-Qaida naturally has been fleeing in this direction. But additional American troops also have flowed north, and they are denying al-Qaida the population centers (a battle looms for Mosul).

The foremost question for the U.S. in Iraq is if we will deny ourselves the most important instrument to influence the outcome -- our troops. Already, drawing down from the surge means a 25 percent reduction in U.S. combat power in six months. U.S. commanders think they can avoid backsliding by thinning out their forces on the ground rather than pulling them out of areas entirely.

Back home, pressure for a bigger drawdown comes from opponents of the war, as well as forces within the Pentagon who say the Army is "broken." No one denies the strain on the Army, or the inspiring, heart-wrenching sacrifices made by our men and women. But a broken Army couldn't possibly have accomplished what our troops have in Iraq in the past year.

It is hard to imagine what the military is for if not to capture or kill al-Qaida (through "lead poisoning," as an officer puts it colorfully). Before he lets his American visitors leave his front yard, Hassen Nssaif Jasim insists that they take home a message: "We are very serious, and we are going to go all the way to the end of the path. We don't want you to leave." And we shouldn't.