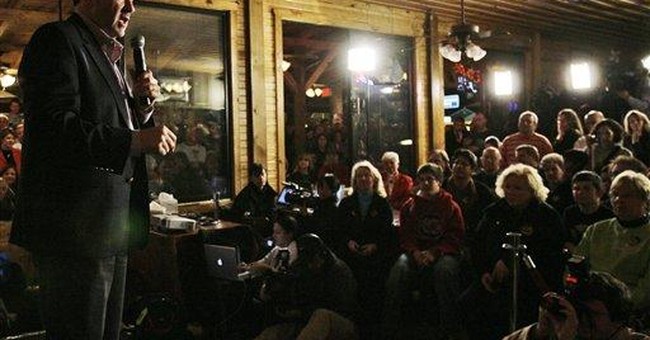 Mike Huckabee has pulled a neat trick. His appeal so far has been limited exclusively to evangelicals, yet the press has taken him seriously as a new populist force in the Republican Party who could at any moment "break out" to appeal to lower-income voters.

Who knew a candidate of Christian identity politics would be afforded such respect? But Huckabee has managed it, which is one reason why he should open a strategic-communications firm the day after he leaves the presidential race. The ability to gull analysts into making so much from so little is a rare and potentially lucrative talent.

On this basis, E.J. Dionne of The Washington Post declared "a revolution in Republican politics." David Brooks of The New York Times opined that Huckabee's win "opens up the way for a new coalition," given how profoundly he understands "middle-class anxiety." Huckabee's national campaign chairman Ed Rollins talked in similarly grand terms of rallying working-class voters to the GOP.

Huckabee is a kinder and gentler Pat Robertson. His twinkle-in-the-eye and skill as a performer make him an upgrade over previous Christian conservative candidates, but don't give the average voter any reason to vote for him. His campaign has specialized in sanctimony layered on top of disingenuousness, low demagoguery and policy incoherence.

In Iowa, Huckabee played the religion card against his Mormon rival, all the while pretending he was doing no such thing. Then, he became enamored of his line that people should vote for a candidate who looks like someone they work with rather than someone who lays them off -- another shot at Romney. He concluded his TV ad in Michigan with the line, but it got him nothing. Ordinary looks don't constitute an economic policy.

Huckabee's campaign has been run on, to invoke two of his favorite substances, duct tape and WD-40.When reporters asked who his foreign-policy advisers were, he cited former ambassador to the U.N. John Bolton as someone with whom he has "spoken or will continue to speak." But he never had. His advisers then said he had e-mailed Bolton, which he had once without ever following up. It was vintage Huckabee -- slippery and laughably unserious.

Now Huckabee has gone from supporting the Bush amnesty plan and righteously declaring in a debate that children of illegals shouldn't be punished for the sins of their parents, to promising to chase them all -- man, woman and child -- from the country. It might be the most nakedly political turnabout any GOP candidate has made in the race.

The tragedy of Huckabee's campaign is that if he had sat down two years ago and thought seriously about what it would take to become the next president, he might have been able to make much more of his winsome ways. Instead, he ran on a kind of lark, without carefully considered policy, without fundraising, without organization. His warm persona and religious rhetoric have won evangelicals, but left other voters cold, despite the fanciful theories spun around his candidacy.

There are enough evangelicals in South Carolina and Florida for Huckabee to do well in the weeks ahead, but, ultimately, he is bound by the limits of his own Christian identity politics.