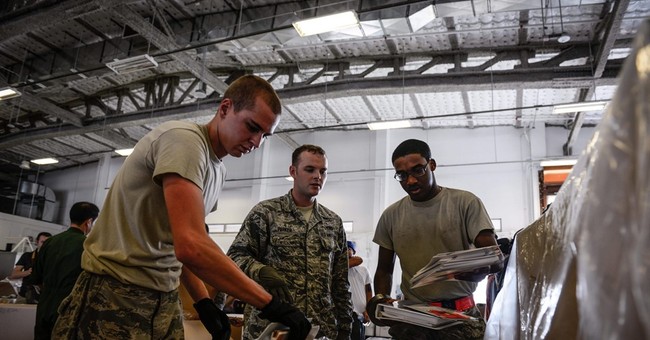 NOTE: This is an edited version of the column from Christmas 2003 which was written from Tikrit and Baghdad, Iraq. At the time, according to the Congressional Research Service, there were 130,600 U.S. troops in Iraq. This Christmas, while most of them are home, the sound of sabers rattling echoes again throughout the land. As we close 2015 we still have 160,000 American military personnel plus tens of thousands of American civilians stationed in almost every country of the world. They won't be home for Christmas this week. Let's not forget they are still out there. On post.

It is 10:45 PM on Christmas Eve here in the Palace in Baghdad, eight hours ahead of the east coast of the United States. The space in which I work is a large barn of a room we call the Green Room. The Air Force folks have set up a white board against one of the greenish walls, borrowed a projector used for presentations, and loaded the DVD of "It's a Wonderful Life" into a computer. George Bailey has been declared, by his brother, "the richest man in town," and Clarence has just won his wings. Still holds up.

Starting at about six this morning the bad guys tried to prove that neither Saddam's capture [about two weeks previous] nor Christmas - the holiday of the Crusaders - meant anything to them by launching mortar attacks at us. They didn't hit anything, or anyone, of value but they kept us all on edge all day.

Because of the attacks, the young Marines who nightly come in to use our phones to call home are absent because they are out protecting us. They will probably patrol all night. We will let them use our phones tomorrow, Christmas day.

All over Iraq - all over the globe - there are young people like our Marines who are out protecting us. They are American service personnel who are not home tonight and will not be home tomorrow nor the day after that.

Most of them will get to a phone or, at a minimum, a computer with which to share a digital moment with their families.

They are not sad, these young people. They are committed to doing what they have been trained to do.

They want to go home. And they will, most of them. But for tonight, it is another night on duty, in a building, on a ship, or in a tent which, depending upon where they are, might or might not have inside plumbing.

The rule is: You open the box, take out what you want, and leave the rest of the treasure on the floor next to your desk. Anyone who comes by is welcome to take whatever appeals.

The big winner is Oreo's Double Stuf. Can't keep them in stock.

It is now just after midnight; and so it is now Christmas in the Middle East, not that far from where it all began.

The military's chief public affairs officer, Col. Bill Darley, just stopped by my desk to tell me, in that sad professional way military people have, that two soldiers have been killed by explosive devices this evening. That makes five this Christmas Eve day. We had heard that the terrorists would be using today to make a point.

They have proven themselves to be heartless cowards who have nothing but hatred in their souls.

It is now the evening of Christmas Day. All over Iraq these men and women - old enough to have children, but young enough to still be someone's child - all over Iraq they will have called home this day, or e-mailed, or instant messaged; renewing the connection between parent and child; or child and parent.

Each renewal will end with the same six words, six words I share with you this day and which come from my heart and from the hearts of every person who is here to do this vitally important job.

You can watch them, the men and women - even the battle-hardened Marines - as they use our phones, staring across the 10,000 miles between a desk in the Green Room in the Palace in Baghdad, and the phone that has hung on the wall of their mom's kitchen since before they were tall enough to reach it.

They stare across that 10,000 miles and they talk, and they listen.

And then so quietly.

These tough, young war-fighters; just before they have to hang up the phone and break that most cherished connection, they each say the same six words:

"Merry Christmas;
I love you, too."