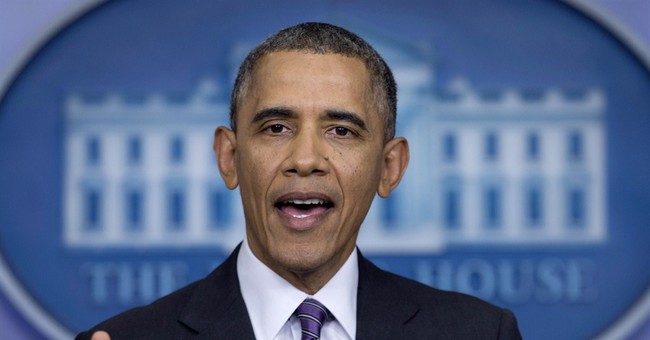 During his press conference last week, President Barack Obama was asked by Politico's Edward Isaac-Dovere whether he would advise Democrats to run on the success of the Affordable Care Act.

According to the Washington Post's Chris Cillizza the President said in response:

"I think Democrats should forcefully defend and be proud of the fact....we're helping because of something we did."

He also said, "I don't think we should be defensive about it."

Defending something without being defensive while doing it will twist most Democratic candidates into rhetorical knots, but that's not the point.

The point is, I have been around pretty senior Democratic operatives and message mavens over the past two weeks and they have been vociferous in their claims that Republicans are wrong in their estimation that Obamacare will be a negative issue for Democrats in November's elections.

So much so, that I am becoming convinced this is a coordinated effort to scare Republicans away from talking about Obamacare so the campaigns will be fought in an arena more friendly to Democrats.

Eight million people having signed up for Obamacare does not, as the President claimed, prove that the program is working. It proved that six months after HHS Secretary Kathleen Sebelius threw the switch, the signup process finally worked well enough for people to avoid being fined for not signing up.

Getting people to enroll in a program is not evidence that the program is working. We don't know how many people will not, even with subsidies, be able to afford their deductibles and on-going premiums.

We don't know how many who can afford their deductibles and premiums will be able to find the medical services they are paying for.

We don't know how much insurance companies will have to increase those deductibles and/or premiums when the rates reset later this year.

And, here is the big one: We don't know - and won't know for a long time - whether the general health of the American population will have been improved with the advent of Obamacare which is, in the end, is the point of the exercise.

Over the past 30 years there have been two major political seismic jolts in elections for the U.S. House.

The first was in 1994 when Newt Gingrich took political control of Republican Members of Congress who had been in the minority for so long they were not just suffering from the Stockholm Syndrome, some were actually speaking Swedish in the the Republican House Cloakroom.

The political pivot point for Gingrich's takeover of the House was the Health Security Act that, in 1993, had been proposed by President Bill Clinton having been devised by the head of the task force in charge of formulating it, First Lady Hillary Rodham Clinton.

Republicans picked up 54 seats that November largely on the basis of HillaryCare and took control of the U.S. House for the first time in 40 years the following January.

In the election of 2010, following the adoption of Obamacare the previous March, Republicans again stormed the health care ramparts and picked up 63 seats to wrest control of the House from the Democrats.

Obamacare was not central to the Presidential campaign in 2012 because (a) Republican candidate Mitt Romney, while Governor of Massachusetts, had signed a similar program into law and (b) the Obama campaign spent hundreds of millions of dollars to avoid letting the discussion move very far away from Romney's business record at Bain Capital.

Going back to the President's answer last week, reporters should ask Democrats who are in contested seats for the House and Senate this:

"If the President were to come in and campaign for you, would you like to have him center his remarks on the Affordable Care Act?"

Reporters might also ask the advisors to, and managers of, those campaigns how much money (or at least what proportion) they intend to spend on radio and TV ads extolling the fact that their candidate voted for the ACA.

That's why they hold the elections.

On the Secret Decoder Ring page today: Links to the WaPo's glance at the President's press conference, to the Stockholm Syndrome, and to the election of 1994.

Also a license plate Mullfoto I might have used before, but I don't think so.