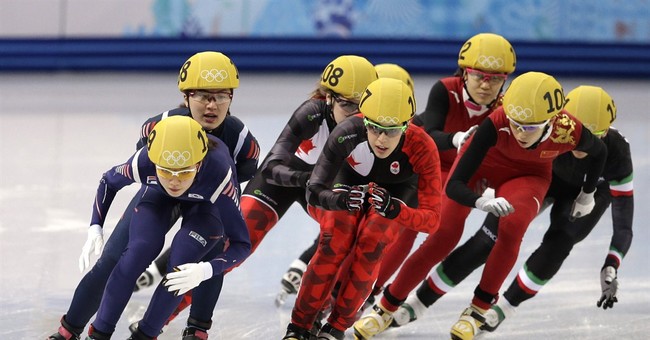 I want to like the Winter Olympics. I want to be excited about the athletes. I want to not know who won what until I can watch the events on tape delay.

There are a couple of problems with the Winter Olympics. The biggest one is these are not sports most of us have played with any regularity - or ever.

Luge (pronounced "Loo-zh") is a good example. Most of us have been on a sled at one time or another. And many of us have slid down a snowy hillside on one of those aluminum disks like the one Sen. Al Franken (D-Minn) used to wear over his head on Saturday Night Live.

But very few of us have participated in Luge Doubles - which has one guy on his back with another guy on lying top of him also in the supine position. It is just as creepy as it sounds.

Those who participate in Luge are called - and this is true - Lugers (pronounced "LOO-zhers").

Curling is a sport that is popular during the Winter Olympics every four years and then disappears from American consciousness again.

Except for South Florida.

Curling is essentially shuffleboard played on ice with brooms and a big stone.

In South Florida, shuffleboard is essentially curling played on asphalt painted a crusty green with plastic disks and what are known as "shuffleboard cues." Now that I know what they're called, I'm checking Amazon.com to see how much they cost.

I think, you go down to Florida, you walk onto the court with your own shuffleboard cue, and you are treated with respect.

You are the Fast Eddy Goldberg of La Boca Vista (Phase III).

If you've watched any of the 291 hours of Curling that have been available on one of the NBC feeds, you know that it is strangely hypnotic. Not only that, but I suspect some of the announcers have taken their medically necessary doses of weed just before the match so, as far as they're concerned, the Curlers are hurtling down the ice like Lugers standing on their sleds.

Another problem with the Winter Olympics is that so many of the events have only one or two competitors on the course at the same time. I understand they are racing against the clock, but think about the difference watching 10-or-so horses heading down the stretch at the Kentucky Derby and watching one horse at a time work its way around the track.

Women's Biathlon is a great sport and there should be more of it. This involves often beautiful, always highly skilled athletes combining cross country skiing and shooting a rifle. Women in tight outfits ... with guns.

As I've said before, the only Olympic event that could be better would be women's Beach Volleyball if they carried 9 mm pistols.

That would be just about the perfect sport.

Hockey is hockey and is fun to watch especially when the USA team wins as the Women's team did yesterday beating Sweden 6-1 in a semi-final game. They will face Canada in the final. The game was not as close as 6-1 score might indicate.

In men's hockey you already know that the US beat Russia in a post-overtime shootout in a preliminary round game. But, I remember when the NHL had stars like Maurice Richard (pronounced ree-SHARD), Gordie Howe and Terry Sauchuck.

Now, players with names like Alex Ovetchkin, Dmitri Kulikov, and Vladislav Namestnikov kill penalties and score goals in the NHL.

Snowboarding? I don't understand any of it. Used to be you stood at the top of the hill, you aimed your skis at the bottom of the hill, the one who got there the fastest, won.

As I finish this column, I am watching Bob Costas' return to the anchor chair after suffering from an eye infection that made him look like a red-eyed demon, scaring little children from Vladivostok to Vancouver.