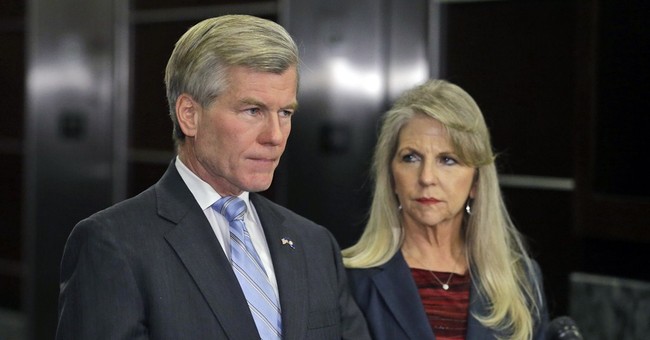 You may have seen, read or heard that Governor Bob McDonnell and his wife were indicted on Tuesday by a Federal grand jury in Richmond, Virginia.

For a couple of months over the summer, I was the spokesman for the Governor's private legal team. I am not an attorney. I felt like one of those announcers for a Lawsuits-R-Us ad on TV: "I am a paid, non-attorney spokesperson."

I had never met Bob McDonnell prior to taking on that assignment, but everyone who had, told me that he was a first-rate guy.

Nothing that I learned during that two-month stint or since has dissuaded me from that description.

He was also uncharacteristically oblivious to what was going on around him in the Governor's mansion between his family and a donor/friend/benefactor.

I do believe that the McDonnells did more-or-less everything that was laid out in the 43-page indictment, but it is not at all clear to me that, however embarrassing in the light it has been portrayed, that it was illegal.

You can read all the coverage about what the feds want a jury to believe happened and in what order. That's what lawyers and trials are for.

You can also read the thousands of words being written about the McDonnells specifically or as a cautionary tale to others who, like the staff at Downton Abbey, get a glimpse of life above stairs and sort of want to sit at the formal dinner table, not stand along the wall behind it.

The reporting laws in Virginia have been so lax that it is almost impossible to run afoul of them. The McDonnells were indicted for allegedly breaking federal statutes.

As I understand it, an elected official in Virginia has to report any gift or thing of value over $50 in a calendar year. He or she can take as much as they want, but they have to report it.

That is, if I give you - Madam Delegate - a lovely decanter from the gift shop at George Washington's Mt. Vernon that cost $250, you can take it, but you have to report it.

However (again, as I understand it) I can present your spouse with John Kerry's $7 million yacht, for keeps, and you don't have to report a penny of that.

You know how I know this is the way business is done throughout the Virginia state government? Because of the screamingly loud silence that came from Democrats in the state house and senate during the entire investigatory process that began last March.

2013, remember, was an election year in the Commonwealth. Governor, Lt. Governor, and Attorney General offices were all up for grabs as were all the members of the House of Delegates.

Astronomers presume the presence of a planet in a different solar system not because they can see the planet, but they can see its gravitational and visual effects on its home star.

I can't see every elected official's bank account and vacation schedule, but in a year when attacking Bob McDonnell would have been Politics 101 if only to sully the Republican brand, there was almost none of it.

Was that because of the Democrats' deep affection for their Republican Governor? Or was it because there was an agreement throughout the Statehouse that "Thou Shalt Not Poop in Thine Own Nest."

That is, nobody had the stomach to rain down investigators on every state legislator for the sake of one press release against Bob McDonnell.

Do I know this as a fact? Nope.

But I can see the star dimming slightly as the planet passes between it and the Earth. And I can detect the small wobble as the planet circles around the star.

Are the McDonnells guilty of the 14 counts with which they are charged? Maybe some of the more minor ones, like refiling a corrected loan application but that's a far cry from, as the feds have charged, essentially turning over the mechanism of state government to a dietary supplement manufacturer.

I know the McDonnells' side of the story. They haven't had their turn at bat yet, so we'll see how it plays when they do, and you get to hear it, too.

But I know this: Bob McDonnell is a first-rate guy.

I am an unpaid, non-attorney citizen of Virginia.