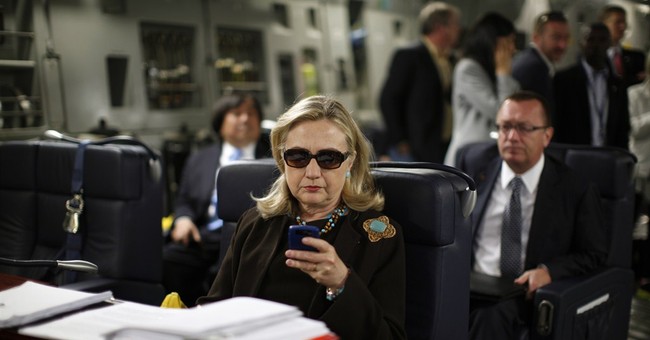 As if President Barack Obama didn't have any embarrassing issues to deal with, now come the reports -- not proof -- of some really ugly allegations. The original CBS reporting contained a memo from the Diplomatic Security Service alleging wrongdoing and possible interference in at least eight investigations.

According CBS among the allegations included:

-- A U.S. Ambassador having "routinely ditched" his security detail to meet up with prostitutes in a public park.

"the State Department's security force, charged with protecting the secretary of state and U.S. ambassadors overseas and with investigating any cases of misconduct on the part of the 70,000 State Department employees worldwide."

The claim is that these and other investigations were halted at the behest of State Department officials at the highest levels -- but no claim of interference by Hillary Clinton has yet been lodged.

The highest named official is Patrick Kennedy, Undersecretary of State for Management.

Ambassador Kennedy and I briefly crossed paths in Baghdad 10 years ago. I doubt that he would remember me, but I do remember him.

He was Ambassador Paul Bremer's chief of staff and was easily accessible to anyone who needed a decision at his level; he would listen to my screwball ideas and say "yes," "no," or something like "flesh this out and bring it back."

I find it very, very difficult to believe that someone with Amb. Kennedy's 40-year history of service would take it upon himself to interfere with official investigations.

Assistant Secretary is the lowest level requiring Senate confirmation, but many can be directly appointed.

The point is that an undersecretary in any department is a very, very senior person.

If these reports are true, and these orders went as high as Patrick Kennedy, then I certainly don't believe they went as high as Hillary Clinton. But the fact is that all of these misdeeds happened on her watch and she probably needs to explain how all this could be going on and who (or how) these investigations got short-stopped.

She may have to do that under oath before a congressional committee and, knowing that her histrionics over the Benghazi questioning were more stagecraft than statecraft, this time she may not have as much political cover from Democrats as she had before.

The best news for the State Department: there is so much else going on that this story isn't getting the immediate attention it deserves. I can't even remember all the scandals buzzing around the Oval Office like mosquitoes hatching after a summer rainstorm in Washington, DC.

For its part, the State Department has decided to hire trained outside investigators (through the Office of the Inspector General) to look into all this, but it is unlikely that will satisfy Hill Republicans.

This is not the same thing as hiring a special counsel - a real outside investigator - to look into the charges of not just wrongdoing, but officially covering up that wrongdoing.