The Spectre of Arlen 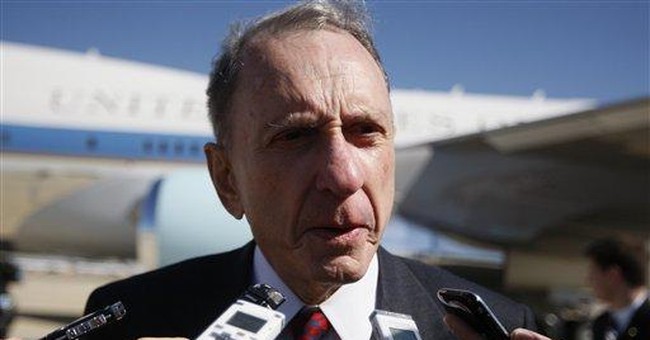 Big day in politics tomorrow. Among others there are two elections in Pennsylvania which will get a great deal of attention, as well as a Republican primary for U.S. Senate in Kentucky, and a Democratic primary for Senate in Arkansas which will keep the lines buzzing for a while.

In Pennsylvania, the primary between Sen. Arlen Specter and Rep. Joe Sestak will decide who gets be the Democratic nominee for the U.S. Senate to run against Pat Toomey in the Fall. The likely story is Sestak will win because he is running a very smart campaign, reminding Democratic voters that Specter was a Republican for 126 years until he realized he couldn't survive a GOP primary challenge and so switched, only to find he probably won't survive a Democratic primary.

President Barack Obama has endorsed Specter so a loss will be seen as further evidence (along with the results in Virginia and New Jersey last November) that the bloom is well and truly off the Obama political rose.

Also in Pennsylvania there is a special election to fill the vacancy in the U.S. House brought about by the death of John Murtha, who had held that seat for almost as long as Specter was a Republican. Murtha's staffer, Mark Critz is running against Republican businessman Tim Burns. This is a lunchbox-Democrat district which may well elect the Republican.

Over in Kentucky, there is a Republican intramural battle for the nomination to replace retiring GOP Senator Jim Bunning. The son of GOP-ish Congressman Ron Paul, Rand (no, not Ru), is running an insurgent campaign against the Republican Secretary of State Trey Grayson. Paul is the Tea Party candidate, having been endorsed by Sen. Jim DeMint (R-SC) and Sarah Palin. Grayson is the establishment candidate carrying the endorsement of Senate Minority Leader Mitch McConnell (R-Ky).

In Arkansas, incumbent Democratic Senator Blanche Lincoln is being challenged by Lt. Gov. Bill Halter in the Senate primary. Halter has the support of organized Labor which apparently feels Lincoln is too moderate for their taste.

Sen. Lincoln is expected to win, but there are additional candidates in the race which may keep her from getting 50 percent-plus-one of the votes which would require a one-on-one runoff against Halter.

Whatever the combination of wins and losses tomorrow, the ruminants in Washington's chattering class will have plenty of political cud to chew over.

Greek Prime Minister George Papandreou has announced he may sue U.S. banks for their role in causing the near (and perhaps future) collapse of the Greek economy for "fraud and lack of transparency."

If the Greeks with or without Wall Street, is likely to run up debts expected, according to the Associated Press, "to exceed 140 percent of its economic output in 2012."

Profligate Greeks v Greedy Profiteers. Sort of reminds me of the Iran-Iraq war. I never did figure out who to root for.

Sen. Jeff Sessions (R-Ala) is the senior Republican on the Senate Judiciary Committee which will hold confirmation hearings on the nomination of Elena Kagan to be an Associate Justice of the U.S. Supreme Court.

According to the Washington Post, Sessions "blasted Kagan on ABC's "This Week" for refusing to allow military recruiters on the campus of the Harvard Law School when she was dean.

Kagan has said she barred the recruiters because of the military's "Don't Ask Don't Tell" policy regarding gays serving on active duty.

And I'm not smart enough to shop at the Harvard book store much less have been admitted to the Harvard Law School. My recruiter was in Parsippany, New Jersey in the National Guard Armory.