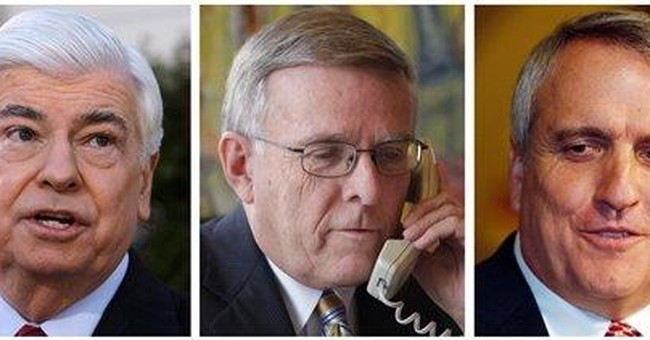 In December, four Democratic Members of the U.S. House announced they would not run for re-election.

One Democratic Member of the U.S. House has switched sides and become a Republican.

All-time Mullfave Joe Gaylord who was one of the architects of the 1994 GOP takeover of the U.S. House was asked by the Washington Post about this: Democratic retirements accelerated in 1994, compared with their pace in 1993, and [Gaylord] predicted the same could happen this time. "It got collectively worse as they moved along," he said.

This week two senior Democratic Senators - Chris Dodd of Connecticut and Byron Dorgan of South Dakota - announced they were retiring at the end of this Congress.

That may have saved the Connecticut seat for the Democrats, but probably turns the Dorgan seat over to the GOP.

Those announcements bracketed that dope from Nigeria trying to blow up a plane on Christmas day, and the boneheaded pronouncement by the Secretary of Homeland Defense, Janet Napolitano, that "the system worked."

President Obama and Senate Majority Leader Harry Reid had to resort to bribery to (a) get the health care reform bill ON the floor ($300 million to Democratic Louisiana Senator Mary Landrieu) and who knows how many hundreds of millions for Democratic Nebraska Senator Ben Nelson to get the bill OFF the floor.

It does not look good for the President being able to begin his State of the Union address in a few weeks saying: "For the first time in the history of the Union, we have universal health care."

Which would have been followed by 27 minutes of prolonged applause by the Democrats in the House Chamber and the sobbing adoration of most network anchors.

One year ago today, reporters were desperately trying to find notarized copies of the Republican Party's Do Not Resuscitate order because the GOP was gasping for its last breath as the world waited for the inauguration of Barack Obama.

Mr. Obama was going to lead the country and the world into a new era of universal cooperation. The "war on terror" was declared over (also by bonehead Napolitano) and it was proved by a promise to close Gitmo.

The world would unite around the U.S. as Obama promised to cut carbon emissions here and reverse global warming. Unions would rebound and there would be healthcare for all.

The Obama Administration is not yet one year old and it is all turned into dust.

Card check never had a chance. Those pesky foreigners didn't want to buy in to Obama's plan in Copenhagen and the global warming conference fell apart. Town Hall meetings in August are still echoing through the hallowed halls of Congress five months later causing the health care bill to look sicker every day.

The GOP isn't exactly running the ball down the Democrats' throats on Capitol Hill. House Republican Leader John Boehner (R-OH) and his counterpart in the Senate Mitch McConnell (R-KY) have such minor minorities that they have little choice but to point and shout.

Happily for them, tone deaf Nancy Pelosi (D-CA) is Speaker of the House and not the much more nuanced Steny Hoyer (D-MD). Pelosi will march her majority right off the cliff and all the House Republicans have to do is stay out of her way.

It was the Democrats' turn. The only question was: Would it be the first Woman or the first Black?

By playing the numbers game all day every day (we've got the votes to do what we want so we don't have to give you a seat at the table) Congressional Democrats have accepted ownership of everything which irritates and/or worries the American people.

Ten percent is a very, very big number when it is attached to the word "unemployment."

Congressional Democrats are further hobbled by President Obama who, in the first 50 weeks of his Administration, has caused most Americans to believe that, his intentions notwithstanding, he is not terribly good at this President thing.

We are inside of 300 days until the November elections. The Democratic sine wave is on the way down and without doing much of anything, because it is a zero sum game, Republicans are on the way up.