Scooting Through the DMV 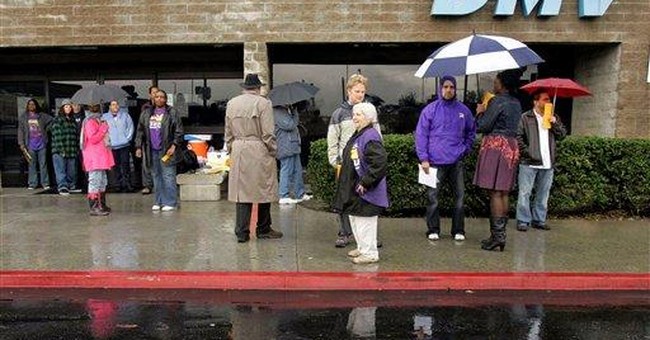 Those of you who are following me on Twitter or wasting your time on Facebook know that I went to the Virginia DMV the other day to get a new license plate for my motor scooter.

For the masses of you who missed this exciting chapter in my life, let me catch you up.

My motor scooter - which is a 150 cc four-stroke, water-cooled Chinese-made Qlink - is treated by the Commonwealth of Virginia as a motorcycle.

Anyway, 2008 being an even-numbered year divisible by four and all, I had neglected to renew the plate and when I tried to do it on-line was informed it had expired in October and I had to go to the actual DMV to get a new one.

Ok. This was my fault, so I got it inspected, called the insurance company to send along new proof of insurance papers, took the title and the old registration as well as the old license plate and headed off to what I knew, and you know, was going to be a 90-minute wait for my number to come up and to get a new plate.

When my number was called and I walked up, to the counter with that "dealing with a bureaucrat" face we all put on: Eyebrows raised, lips in an Ozzie Nelson (which is to say non-confrontational) smile, and a general "I'm so happy to be here dealing with my state government" aura spurting out from my entire body.

I handed the woman my paperwork, and the old plate. She took everything and went away to wherever bureaucrats go when they leave their posts which may be the same place teachers used to go when I was in junior high and, having given us a writing assignment, put Sally Smallbottom in charge as the monitor, and walked out of the room.

I learned, in later years, they headed to the teachers' lounge which, in the day, was so thick with cigarette smoke that some teachers saved money by just going in and inhaling deeply - a third period Chesterfield contact high.

… and don't look like you're irritated. Bureaucrats can make you wait for decades if they. Hence the Ozzie Nelson thing.

The woman came back in about ten minutes to tell me that … I SUH-WEAR this is true … they didn't have any motorcycle license plates.

I suggested, gently and with great charm, that this was the Department of Motor Vehicles and I had no other option than to get a license plate from them. Seven-Eleven, I said, didn't have a motorcycle license plate aisle. I may have mentioned that the Post Office more often than not had stamps. And, while Hertz didn't always have cars, Delta Airlines almost always had planes.

She, in that frontal-lobe-less way that bureaucrats adopt over the years, just repeated that they didn't have any plates.

I asked if, as my old plate was sitting on the counter right in front of her, whether she could just enter that as the new plate number and let me just take that one back. Sort of like fooling the office computer system by re-entering the same password as the one which the system has told you has just expired.

This … this is why I am paid the big bucks.

Have a good weekend.