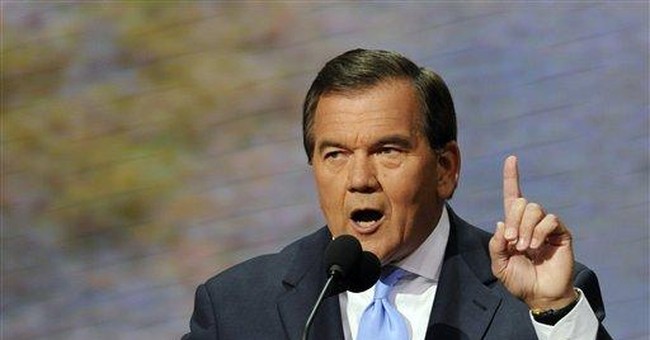 Tom Ridge will not run for Senator from Pennsylvania. He has decided to pass up the chance to trample an ultra-conservative Republican in the primary and sneak past a former-moderate-Republican in the general election for Senate in 2010.

Arlen Specter has a pain-in-the, er, tush for nearly 30 years. He was first elected to the U.S. Senate in 1980 - the same year as Ronald Reagan was elected President and Dan Quayle was elected Senator from Indiana.

Specter was being challenged in a Republican primary by Pat Toomey who was the head of the Club for Growth.

My beef with the Club for Growth has been: There are plenty of Democrats to go after why diminish the GOP by working for the defeat of Republicans?

Pat Toomey is a former three-term Congressman from Pennsylvania. According to Townhall.com:

Really. Toomey was a derivatives trader? Like all those other thugs on Wall Street? Managed $21 billion? I think I'd like to hear a little bit more about Mr. Toomey's previous professional life. Don't you?

Anyway, Sen. Specter is so unpopular with Republicans in Pennsylvania that they told pollsters they preferred a Wall Street derivatives hooligan like Pat Toomey to Specter in the GOP primary next year.

Arlen, being a creature of the Senate, walked over to have a sit-down with Majority Leader Harry Reid to see what kind of deal he might strike to move to the Democrat side of the Senate Chamber and run as a Dem for re-election in 2010.

This gets a little murky because Arlen says Harry told him that he would be allowed to keep his nearly-30-year seniority. But the rest of the Democratic caucus thought otherwise and as of Wednesday Specter went to work finding himself the most junior member of the Democratic Senate Caucus.

I hope they make him wear a beanie with a propeller on it, order him to get coffee for more senior members - like those first elected in 2008 and make sure the newspapers are tidy in the Democratic cloakroom.

The world descended upon Tom Ridge to save the day.

Ridge served as a non-commissioned officer in Vietnam and lost a good deal of his hearing for the price of it. He then served as a Member of Congress from the Erie area of Pennsylvania. Then he was elected Governor of Pennsylvania. After 9/11 he answered a phone call from President George W. Bush and gave up the Governor's mansion to become a staffer in the White House, and then became the first Secretary of the Department of Homeland Security.

In addition to being a true American patriot, Tom Ridge is still very popular in Pennsylvania. Had either George W. or John McCain chosen Ridge to be his VP running mate, they would have carried the Keystone State.

Don't believe me? A Public Opinion Strategy poll released mid-week showed that Ridge - who has not been in elective office in PA for a number of years - would crush Toomey in a GOP primary by about 37 percentage points and would beat Specter in the general election by about seven points.

The problem for Ridge was… he would probably have won and then would have had to serve in the U.S. Senate.

A United States Senator will spend three weeks worrying over a semicolon in a second-degree amendment on a minor bill which will rise or fall by voice vote. That's how Senators spend their time.

So, yesterday Tom Ridge announced he would not enter the race for U.S. Senator from Pennsylvania and Pat Toomey will likely be the Republican nominee. It is still unclear whether Arlen Specter will follow through with his unbelievably ill-formed plan to run as a Democrat in 2010. I suspect it is now 50-50 that Specter will retire at the end of this term.

I was very happy to see coverage of a Senate Judiciary Committee hearing - the committee which Specter chaired when Republicans ruled the world, and of which he was the leading Republican last week - I was happy to see that he had been demoted to the most junior Democrat. His name plate sat, alone and embarrassed, at the far end of the panel.

Specter wasn't there. He was apparently embarrassed, too.