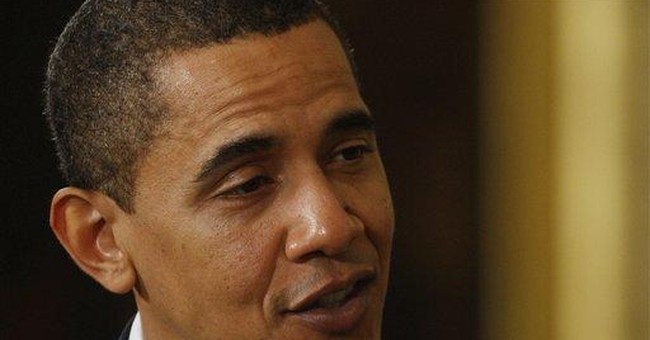 Yesterday the Office of Management and Budget sent a memo instructing people who are fighting the Global War on Terror that it was no longer Global, nor a War, nor had anything to do with Terror.

The new phrase is to be, "Overseas Contingency Operation."

Although the OMB denied it was ordering a change in phraseology, Washington Post writers Scott Wilson and Al Kamen reported,

"Senior administration officials had been publicly using the phrase 'overseas contingency operations' in a war context for roughly a month before the e-mail was sent."

The non-memo went on to strongly suggest that senior Pentagon officials should "pass this onto your speechwriters and try to catch this change before statements make it to OMB."

We give tax "cuts" to people who don't pay taxes, spending is "investing."

This Obamian move to change the language to suit its policies has its roots in Orwell's 1984. In that novel this was called "Newspeak." That is not pronounced newz-peak; but new-speak.

As an example, the word "joycamp" was used to describe a forced labor camp. A "memory hole" was actually a series of pipes into which papers were placed to be shredded.

Words take on new meanings all the time. The word "gay" used to be defined as "excited and merry; manifesting or inclined to joyous exhibition of content or pleasure"

I'm pretty sure a remake of the 1934 Fred Astaire/Ginger Rogers movie would not, today, be titled "The Gay Divorcee." It might be, but the plot line would probably be different as would the marketing campaign.

When the Hormel Meat Company introduced its Spiced Ham product in 1937 they couldn't have guessed that it would come to mean "unwanted e-mail."

Let's join in the fun and invent new words and phrases for the Obamian Newspeak dictionary.

Deficit. Can't have a deficit. Let's change it to "Suspended Surplus." That's good.

Veto. Too negative. Henceforth it will be known as a "Legislative Facilitation."

Unemployment. Oh, no. We'll be calling that "Occupational Realignment."

Feel free to send in your own.

The big question is: Where is the Office of Redefinition and how do I get a job there?