Hillary and the Peter Principle 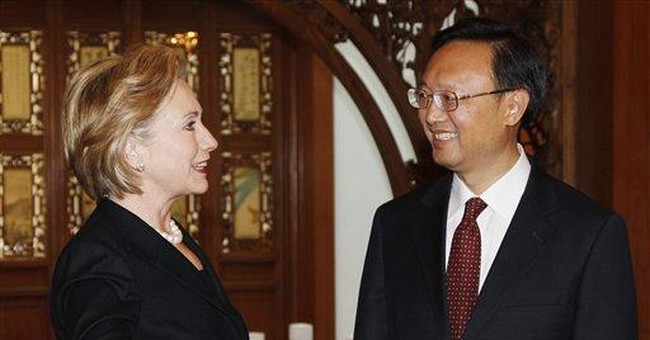 The Peter Principle: "In a hierarchy every employee tends to rise to his or her level of incompetence."

At this point last year, Hillary Clinton was still seen by about half the people who voted in Democratic primaries (and about two-thirds of the reporters who wrote about them) as the best possible person to become the next President of the United States.

In fact, in a poll taken exactly a year ago by Franklin & Marshall College in the run-up to the Pennsylvania primary the results showed: Hillary Clinton leads Barack Obama by 16 points among likely Democratic primary voters, 51% to 35%. Mrs. Clinton leads among voters in virtually every demographic group, with the exceptions being non-whites and voters in Philadelphia.

Hillary, remember, had gone oh-for-February and under the rules of the Democratic Party it was not likely she would be able to overtake Barack by the end of the primary season, but she refused to get out.

It is now clear to me - although I have absolutely no reason to know this to be true - that Hillary agreed not to blow up the Democratic convention in Denver if she became Secretary of State.

And she is dreadful at it.

Need proof? How about the one paper which Conservatives read when they can't tune in Rush Limbaugh. I speak, of course, of the Washington Post which, in its lead editorial on Monday wrote:

The Post reminded us that when Clinton was in China she dismissed its dismal human rights record by saying "'those issues can't interfere' with economic, security or environmental matters."

Then, after her State Department wrote that Egypt's "respect for human rights remained poor during 2008," she gave Egyptian President Hosni Mubarak the diplomatic equivalent of a wet kiss by saying, "I really consider President and Mrs. Mubarak to be friends of my family," which, according to the WashPost "will be treasured by al-Qaeda recruiters and anti-American propagandists throughout the Middle East."

In Turkey, when she was asked about her Department's giving Turkish Prime Minister Recep Erdogan the diplomatic equivalent of a Special Agent Jethro Gibbs smack on the back of the head for "strongly criticizing the press and media business figures, particularly following the publishing of reports on alleged [government] corruption" she said:

"Well, my reaction was that … no politician ever likes the press criticizing them."

Oh. We're not done yet. This is the best part.

When British Prime Minister Gordon Brown visited American President Barack Obama last week there were several things which were seen, by diplomats, as slights - but real people wouldn't have noticed.

There was no opening press conference in front of the massed flags of the two countries. And WH press secretary Robert Gibbs talked about the "special partnership" between the US and the UK which is not the same, in diplomat-speak, as the previous construct which was "special relationship."

But that wasn't the big one. The big one was the exchange of gifts. According to the New York Daily News:

"After Brown presented Obama with a pen holder crafted from the timbers of the 19th century British warship HMS President (whose sister ship, HMS Resolute, provided the wood for the Oval Office's desk), Obama offered up ... 25 DVDs of American movie classics."

How is this tied into Hillary? Well, as it happens the officials responsible for deciding who gets what from the President are the folks in the Gift Division of the Office of Protocol which is in the State Department which is run by … Hillary Clinton.

The Brits are understandably miffed by the notion that the people at the highest levels of the US government gave some staffer the State Department VISA card with instructions to go the Borders at 18th and L and find something for about 100 US Dollars, not British Pounds.

Brown had thought about this visit and presented a one-of-a-kind gift. Clinton's people … didn't.

Remember that during the campaign Hillary claimed she knew a lot about this stuff because she had travelled around the world a good bit either by herself as First Lady, or as chaperone-in-chief to keep an eye on old Bill while he was on a road trip (if you know what I mean and I think you do).

It turns out that Hillary Clinton has reached her level of incompetence as Secretary of State.

The problem for the rest of us is that President Obama can't seem to decide whether to be Herbert Hoover or Franklin Roosevelt when he talks about the economy.

So, as dismal as she has been in her first months as Secretary of State, Hillary Clinton might have been correct: She still might have made a better President than Barack Obama.