The Rubio Rally That Wasn't

Rebecca Hagelin
|
Posted: Mar 08, 2016 12:01 AM
Share   Tweet
The opinions expressed by columnists are their own and do not necessarily represent the views of Townhall.com. 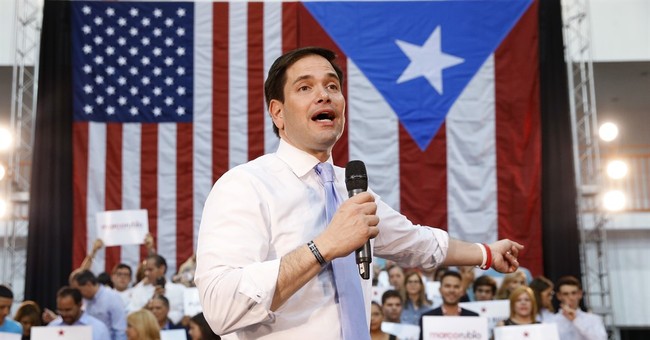 The man was standing alone, leaning against the wall in the still half-empty conference room that the Marco Rubio campaign had rented for the senator's "big" Tampa rally. It was only 15 minutes before start time, and people were only trickling in.

"Are you a Rubio supporter?" I asked the 60-something gentleman.

While in line 30 minutes before the event waiting (with only a couple of hundred other people) for the door to open, I heard several say, not that they had come to support Rubio, but that they were now undecided about who to vote for.  Anxious campaign staff kept looking for crowds that weren't there, and would never materialize.

The Tampa Convention Center was the spot for this ill-fated rally.  The expectation of those around me was that they would be among thousands of raucous Rubio supporters inside the main arena.  No one seemed prepared for such a dismal showing in one of the largest cities in the home state of the man who would be president. The stagnation of spirits was clear: even avid supporters' faces revealed that they realized that Marco Rubio is going down.

How sad for the once promising young senator - the firebrand that inspired Floridians across the state enough to topple the  Establishment and win a seat in the United States Senate.  I was one of those people who believed everything Marco said back then; who saw him as the great hope for national restoration of conservative values.

But like many of my fellow Floridians who supported Marco, I soon realized that he had kicked me in the gut. The young senator broke his promises, belied many of his conservative principles, and ran right into the loving arms of the likes of Senator Chuck Schumer.  Marco locked arms with the liberals and the Establishment, and ended up betraying the very voters who elected him as well as the many legal immigrants in Florida and across the country who had played by the rules.

But back totonight's event.  Several times in that last 15 minutes before Marco arrived, folks and staff on the stage tried to rev up the crowd.  Cheers that they started quickly petered out, ending in an awkward verbal silence.  The rock music blaring through large speakers was turned up instead.

As Marco entered the still partially filled room (I estimate a crowd of about 700 or so, and that is being generous), he was met with lots of enthusiasm from those standing near the front. But I watched the people in the middle of the room, and they were very slow to be caught up in the drama of Marco lingo.

To be fair, Marco did manage to rev up the small crowd a bit.  His biggest applause lines were the same ones I heard in 2010: he extolled a great country where the son of a bartender and a maid could grow up to possibly become president of the United States; he promised to be the first president in many years to uphold the Constitution.

All inspiring stuff, for sure.  Except that we've heard this part of his speech before, and I, for one, am no longer impressed.  As the faithful, the faithful few, cheered and clapped, I studied the faces of the others. They no longer seemed convinced that Marco Rubio has the ability to claim the mantel of conservative leadership, at least not for now.  If they came with hope, their faces and body language revealed that they were leaving with despair.

When Marco Rubio betrayed me as the General of the Gang of Eight, I started looking closely for another leader I could believe in. Would there be, could there be, another Ronald Reagan in my lifetime?

As I studied them all, one person quickly rose to the top. I have become an avid supporter of Ted Cruz, the young firebrand who took Texas by storm, who whopped up on the Establishment, and went to join Senator Marco Rubio in DC. Like Marco, Ted is the son of a Cuban immigrant, a father who washed dishes to pay to help make his American Dream a reality.  Yes, the inspiring personal stories of the senators are very similar.  And the Senate race campaign promises they both made are also strikingly similar. But that is where the similarities end.

While Marco betrayed his campaign promises, Ted Cruz delivered on every one of his, and then some.  And Ted Cruz is still whopping up on the Establishment.

My searching revealed that it was Ted Cruz who has successfully fought for religious freedom, the Second Amendment and a restoration of Constitutional principles. And it was Sen. Cruz who led the charge to dismantle and defeat my Florida senator's massive amnesty scheme.

This time around as the two men face off, Marco may still inspire with emotional speeches, but Ted Cruz inspires with a record of courageous deeds.

As I left the depressing event of my once promising Florida senator, I walked away with a sense of sadness for Marco Rubio.  I started praying that he would love country more than quest; that he would do the honorable thing and step aside and help the man whose life story is so like his own. That Marco would help Ted take America back. With Marco's support, Ted Cruz can defeat Donald Trump - and then Hillary Clinton. Marco is a young man who is capable of making a great political comeback.  But only if he finds his internal compass; searches his soul; and gracefully leaves the race before he is miserably defeatednext Tuesday in his home state.

Every day more Republicans and Evangelicals are coming to realize that Donald Trump is just a liberal in Reagan clothing.  They are now coalescing behind Ted Cruz causing him to surge in votes, in delegates, and in money raised.

If Marco Rubio does the right thing - for his country and for himself - Ted Cruz will beat Donald Trump.  And polls show that in a Ted Cruz vs. Hillary Clinton general election, Ted Cruz easily becomes the next president of the United States.

With quick action, Marco's imminent train wreck can be avoided. The choice is his.