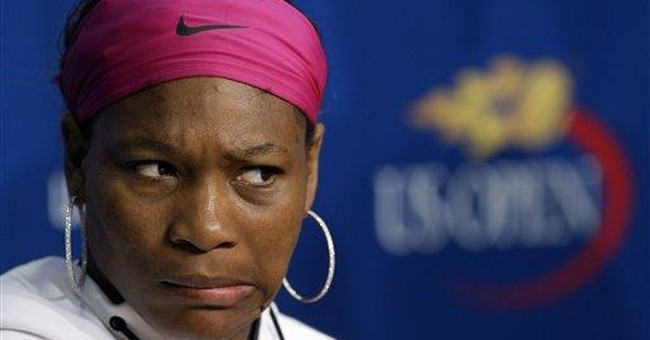 It still stuns me when people of great privilege and position choose to behave like spoiled children. You’ve seen it a million times as have I – the boss going out of his way to humiliate an employee with a public criticism; the teacher who purposely degrades a little kid in class; the politician who arrogantly dismisses the opinions of his dedicated staff and the very people he is supposed to represent.

Sadly, this week we saw two of sports greatest stars display the worst of behavior while the whole world watched. When Michael Jordan was given basketball’s highest honor and celebrated with a tribute worthy of a king, he berated and belittled person after person in his acceptance speech. When Serena Williams suffered a bad call from a line judge, she lost both the match and her dignity as she pitched a fit, complete with the “f” word and threats of bodily harm.

While the nation is now abuzz with the latest demonstration of a “star” behaving badly, it’s probably a good idea to examine our own lives too. We all have some level of influence and authority – how are we using – or misusing it? When anyone in a position of authority – including parents – behaves unseemly, how can we expect our children to do otherwise?

If you’re “the boss” – we already know you are in charge. “Flexing your muscle” to remind us just makes you look inept. We know you worked hard to get where you are. And we also know that you probably had a few lucky breaks and are blessed with talents that many others don’t have. No one makes it to the top without a lot of help along the way. When you treat those “below” you with disdain or are less than respectful, it reeks of arrogance and reduces your effectiveness – and you. It also creates a domino effect – others begin to treat their subordinates poorly. A culture of crassness is cultivated.

And for those of us who are parents, we should consider – and cringe – over what our ill behaved moments are doing to our family.

As much as we like to blame ill-mannered icons for their negative influence on our children, the fact is that parents still hold the power. Poll after poll of teenagers reveals that mom and dad have the greatest impact on the lives of their sons and daughters.

This is very, very good news – if we respond correctly. It means that no matter how crass or rude our culture becomes, we can raise children of virtue. It means that our own children can learn to be gracious and kind in any circumstance, and to everyone around them.

Graciousness is not to be confused with wimpiness. The truly effective boss, teacher, politician – and parent – is quick to uphold truth, standards and to challenge injustice. It’s the manner in which we do so that reveals our heart and attitude toward others, and that will have the greatest influence. Long after the incident is over, what people will remember is the way they were treated. And that is the behavior they are most likely to emulate.

Serena was right to be upset about the lousy call made by the line referee. Everyone would have supported her – had she done so with humility and grace. But when she lost her cool and revealed a heart filled with profanity and pride, we saw that she seems to value her stardom and herself far more than anyone or anything. And what she ended up losing was far more than the match.

As we shepherd the precious lives God entrusted into our care, may we daily seek to mold them into people of courage, grace and thoughtfulness - and to remember that it all starts with the way in which we live.