Ray McFall
|
Posted: Mar 09, 2017 9:38 AM
Share   Tweet
The opinions expressed by columnists are their own and do not necessarily represent the views of Townhall.com. 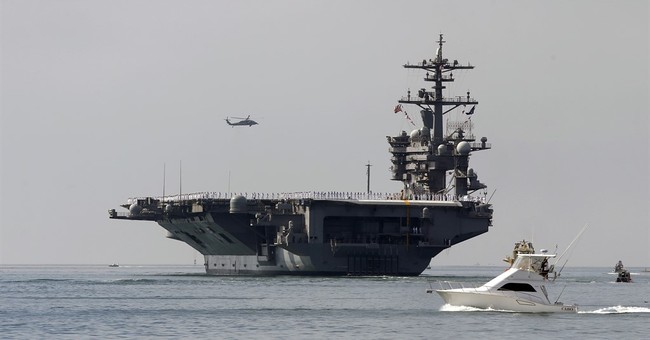 As we contemplate what the next five, 10, and 25 years will look like for our US Naval Forces, we need to keep in mind why we have a naval force and what we ask of it. The true power of our naval capability is derived from a synergistic combination of Carrier and Expeditionary Groups. We should not rob Peter to pay Paul here. We need them both.

While we certainly need to protect our homeland from foreign enemies, our more likely engagement is away from our homeland. We have to be able to project force when required. We want to walk softly, but be able to credibly carry a big stick.

Being able to rapidly and decisively project combat power anywhere in the world is never more important than now, and in the future.

Controlling the sea lanes of communication is a traditional US Navy mission dating back to the Barbary pirates off the coast of Tripoli in the late 1700s and the early 1800s. The decisive action finally came when a naval expeditionary force entered the harbor in Tripoli and, under the protection of naval gunfire, landed a contingent of Marines to confront the sponsors of the pirates and let them know, at sword-point, that this will no longer be tolerated.

Today, the uniforms and ships look different, but the fundamentals are similar. Protecting the seas to guarantee safe passage of commerce is still a top priority of the US Navy and its allies. The various maritime chokepoints (Hormuz, Malacca, Panama, Suez) are still teeming with profiteers, and governments around those chokepoints continuously jockey for control / influence. We have to be able to project power and influence.

Maintaining what we currently have will not be good enough for the future. While many naval strategists are dreaming of building more carriers, destroyers, submarines, frigates and guided missile cruisers, the realists are thinking expeditionary…and logistics. And neither camp is wrong. Just like you can never truly say you control by only dropping bombs from the sky, you cannot truly control from the sea. If you want decisive control (or, intelligence) you are going to have to get boots on the ground.

We have a good capability, but we need a great capability…and one that is tailored to meet / defeat the next threat. Our current expeditionary strike group concept is potent, adaptable and responsive…if it is fully resourced and outfitted.

We have 9 Expeditionary Strike Groups (ESGs) on the books right now. Based on the increasing number of hot spots popping up around the world, and the speed at which they heat up, you can easily make an argument to double the quantity. Whether we double or not, how do we make our expeditionary capability great again?

The first thing we need to do is invest in an adequate Military Prepositioning Force to provide continuous support to the three maritime focus areas (Atlantic / Mediterranean, Persian Gulf / Indian Ocean, Pacific). We have two Military Prepositioning Ship (MPS) squadrons located in the Mediterranean, the Indian Ocean and Guam / Saipan. We need six squadrons: two for each focus area. And these squadrons need to have the latest equipment and material required to support today’s fight.

Next, our current amphibious shipping needs to be updated and adequately resourced. We need the capability to deploy three Amphibious Ready Groups at all times (Atlantic / Mediterranean, Persian Gulf / Indian Ocean, and Pacific). Each of the current amphibious task forces consists of two Dock Landing Ships (LSD), one Landing Helicopter Dock Ship (LHD), and a Dock Platform Landing Ship (LPD). In addition to these each group should have a separate command and control ship with latest equipment, and the ability to protect its networks. We don’t have enough amphibious ships to train, rest & refit, and maintain an adequate presence around the globe.

And most importantly, we need to increase our baseline investment in people. Our selection process should reflect the type of people we need to fill out these ranks: intelligence, initiative, patriotism, morals, tech-savvy and hard-working. Expeditionary warfare is getting harder and more demanding. The future of expeditionary warfare requires more responsiveness, judgement, agility, lethality and decentralized decision-making. These are skills and traits that must be learned and practiced within the team environment.

Equally as important to the investment in capital ships and equipment, we need a motivated, compensated and highly trained naval force. They should be exercising regularly as a combined team, working with allies and off-loading / rotating their prepositioned equipment. When they are not exercising, they should be training with realistic scenarios and material to hone and increase their skills.

Modern warfare requires an effective and powerful naval force with complementing / synergizing Carrier and Expeditionary Strike Groups. Idealists can hope that our current and projected naval force is adequate, but realists understand the value of proactively ensuring stability through power-projection, international cooperation and preparedness.

Ray McFall is a former US Marine Corps infantry officer, Senior advisor at the US Department of State, and was tasked with assessing the buildup of combat power in Kuwait in preparation of the allied offensive to remove the Saddam Hussein regime in Iraq.