John Boehner, Mitch McConnell, And The Congress Ride Into A Box Canyon.... 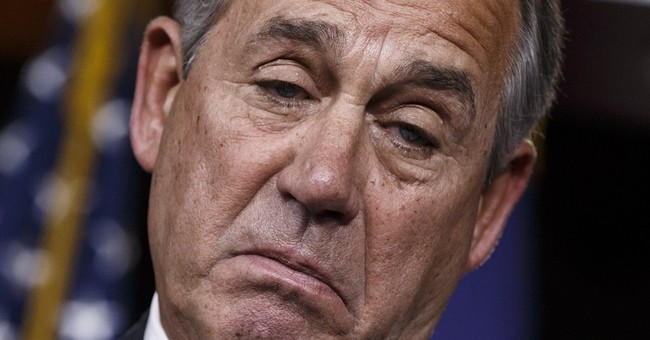 The New York Times considerately gives us an early look at the Box Canyon into which the 114th Congress, the GOP leading, is riding. In G.O.P. Is Divided as Budget Bills Start Piling Up we discover:

WASHINGTON — In their first major test of governing this year, Republicans stumbled, faltered — and nearly shut down the Department of Homeland Security.

And that vote may have been the easy one.

In April, physicians who treat Medicare patients face a drastic cut in pay. In May, the Highway Trust Fund runs dry. In June, the charter for the federal Export-Import Bank ceases to exist. Then in October, across-the-board spending cuts return, the government runs out of money — and the Treasury bumps up against its borrowing limit.

All will require congressional action, and while many of these measures used to be pushed through in an almost unthinking bipartisan ritual, there is no such thing as simple in Congress anymore.

Militant conservatives are calling for a coup against House Speaker John Boehner. The hard core right is expressing fury toward Senate Majority Leader Mitch McConnell. The real villain, however, is an economic “ice age,” not feckless Congressional leadership.

Both Republicans and Democrats are struggling with, rather than changing, a gratuitously poor status quo. Memo to our political leaders: When all of the answers lead to pain … for you and for America … it’s time to change the question.

Meanwhile, beyond the Congress, the vast majority of presidential aspirants strangely are mute on the economic stagnation causing or contributing to all these, and more, problems. Let’s take a closer look at the gratuitous status quo, economic stagnation. And let's change the question to: how to get equitable prosperity back on track?

The reduced growth rate means that living standards are increasing at about half their post-World War II pace for individual Americans. For low- and middle-income families, that’s not much better than standing still.

One danger sign is the lack of a quick rebound from the 2007 to 2009 recession. Usually, sharp declines produce sharp recoveries, but not this time. For the 10 downturns since World War II, it took an average of a little less than two years for employment to get back to the level at the start of the recession. But for the most recent recession, it took six and a half years.

Home prices are still lower than they were 10 years ago, unemployment rates for African Americans are still in double-digits, and the labor force participation rate has hit its lowest point since 1978.

What to do? Glassman rounds up the GOP’s “usual suspects,” proposing to cut corporate tax rates and enhance free trade. He champions, too, an increase of H1-B visas. Then he gives honorable mention to “improving education, cutting the fat from the bureaucracy and encouraging greater contributions to retirement accounts.”

Kudos to Glassman for so lucidly identifying the problem. The standard litany of solutions, however, is insufficient.

America’s, and the Congress’s, predicament certainly is a result of symptoms of the problem of poor growth. Forbes.com contributor Charles Kadlec pointed out, about three years ago, an arcane but crucial fact. I have, in his honor, dubbed this insight “the Kadlec Curve.” As I summarized it in a column entitled Meet Rep. Brady: The Six Trillion Dollar Man:

Kadlec formulated an insight in a Forbes.com column late last year …. He found it hidden inside a footnote [NOTE: as was subsequently pointed out it was hidden in a appendix, not a footnote] of a Congressional Budget Office report.

“[T]he impact of growth on the deficits … can be found in Appendix B of The Budget and Economic Outlook: Fiscal Years 2012 to 2022: every one-tenth of one percent increase in the growth rate will reduce the federal budget deficit over the next 10 years by $314 billion.” [Emphasis added.]

Because real growth currently has been, and is, trending well below the CBO assumption of 2.8%, the scope of 4% growth should be considered $6, rather than $4, trillion in “enhanced” federal revenues.

$6 trillion in new federal revenues is just the byproduct of 4% economic growth. Of even greater importance: an economy generating more (and better) jobs than there are workers.

Rep. Kevin Brady (R-TX), currently vice chairman of Congress’s own bicameral think tank, the Joint Economic Committee, has been a lonely voice in tackling what he calls “the Growth Gap.”

The Growth Gap is the existential issue contaminating our politics. Only former Florida Governor Jeb Bush has pushed restoring high economic growth to the center stage. Bush, in his debut “Right to Rise” Detroit speech, roundly declared, as I here quoted:

Growth above all. A growing economy, whether here in Detroit or throughout this country is the difference between poverty and prosperity for millions. If you want to close the opportunity gap, grow the economy. This is a principle that concentrates the mind.

If a law or a rule doesn’t contribute to growth, why do it? If a law subtracts from growth, why are we discussing it? And for what it’s worth, I don’t think the US should settle for anything less than 4% growth a year – which is about twice our current average. At that rate, the middle class will thrive again.

And in the coming months, I intend to detail how we can get there, with a mix of smart policies and reforms to tap our resources and capacity to innovate, whether in energy, manufacturing, health care or technology.

Glassman was the founding executive director of the George W. Bush Institute, and furnished the introduction to The 4% Solution: Unleashing the Economic Growth America Needs published by the Bush Center. Jeb Bush, in promoting this book in 2012, publicly urged Mitt Romney to campaign on policies of high growth.

One infers, provisionally, that Gov. Bush’s “mix of smart policies and reforms” will include Glassman’s “usual suspects.” While applauding Gov. Bush, one hopes that Glassman’s prescriptions will be just the beginning, rather than the bulk, of Gov. Bush’s — and other contenders' — economic growth platform.

To their credit, several leading presidential contenders have begun nudging the role of the Federal Reserve in economic growth toward the policy discourse. Rand Paul sponsored, Ted Cruz advocated and co-sponsored, and Marco Rubio co-sponsored “Audit the Fed.” Such legislation, although having twice passed the House by a large bipartisan majority, seems unlikely to pass the Senate over the objections of Senate Banking Chairman Richard Shelby (R-AL) and committee member Sen. Bob Corker (R-TN).

Sen. Paul provided further thought leadership by co-sponsoring, in the Senate, along with Sen. John Cornyn’s prime sponsorship, the Monetary Commission proposed by Brady in the 113th Congress. Presidential contender, former Arkansas Governor, Mike Huckabee also, rhetorically, recently raised the wobbly dollar as a growth-retardant in a recent interview, in Iowa, with blogger Shane Vanderhart (who is professionally associated with the sister organization of a group with which I professionally work). By addressing the monetary factor Gov. Huckabee takes a half-step in the right direction. He needs more: a credible solution or, at least, a credible mechanism to produce a solution.

Brady’s proposals to end the “Growth Gap” thus potentially could prove of highest importance. They offer the presidential candidates a ready made, credible, core economic platform to get the economy moving again. They offer a pathway to the Congress out of the Box Canyon into which it is riding. Speaker Boehner? Leader McConnell? Could be your “get out of jail free” card.

Brady’s suite of bills leads off with a proposed bipartisan Monetary Commission to determine, empirically, what Fed policies have correlated with high, sustained, equitable economic growth, job creation and economic mobility. A Commission may sound like a flinch. Not at all.

Monetary policy is complex and highly charged. An empirical inquiry (not designed to be accusatory toward the Fed, which is to have a seat on the proposed Brady Commission, or toward the administration, whose Treasury Secretary also has an appointee) is a necessary first step toward restoring monetary policy conducive to equitable prosperity. Advocating for such a Commission (a prominent plank in the 2012 GOP platform) is a sensible, safe, way to take up the issue of monetary integrity. It is designed to be as respectful to Democrats as to Republicans.

Brady then offers a thoroughgoing package of cost-benefit regulatory policy. Another package offers a plan to constrain federal spending, “guardrails,” his “MAP To Growth.” The Commission, plus Brady’s regulatory proposals, plus the MAP beckon as proposals decisively to move the national conversation toward job creation and equitable prosperity. Let’s change the status quo from austerity to mutual prosperity.

This is Congress’s way out of the Box Canyon: give center stage to ending the real problem — punk growth — rather than simply wrestling with its symptoms. As for the presidential candidates: “It’s the economy, Stupid!” as James Carville once told Bill Clinton (who, on the stump, was drifting into declaiming on nuclear proliferation). Time for Congress to take up closing the “Growth Gap.” Time for the presidential candidates to champion economic growth.

All that it will take materially to change the tone of our politics may be for the presidential field — of both parties — to see Gov. Bush’s “Growth above all” stake … and raise him. It would be beneficial for America for the candidates of both parties to get into a bidding war, offering recipes for equitable prosperity … beginning with Rep. Kevin Brady’s proposed suite of legislation to close the Growth Gap.