Rachel Marsden
|
Posted: Jun 27, 2018 12:01 AM
Share   Tweet
The opinions expressed by columnists are their own and do not necessarily represent the views of Townhall.com. 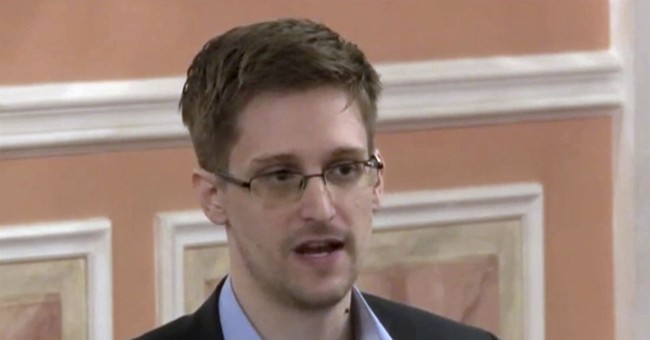 PARIS -- Five years ago this month, former CIA employee and government contractor Edward Snowden was charged with espionage after fleeing to Hong Kong with a cache of classified documents from the National Security Agency. At the time, he was either hailed as a hero or denounced as a traitor. Regardless of how you view him, history could very well end up connecting the dots between Snowden's actions and the ascendance of Donald Trump to the presidency of the United States.

Many intelligence officers say that Snowden is a traitor since the information he carried with him to Hong Kong -- subsequently leaked to selected journalists and then published -- could have inadvertently provided foreign intelligence services with pieces of information that would compromise the intelligence operations of Western nations, particularly those of the "Five Eyes": the U.S., Canada, Britain, Australia and New Zealand. All of these agencies share data with the NSA.

Here in France, it's hard to find intelligence experts who denounce Snowden. They ignore the potentially negative impact on the Five Eyes and play up Snowden's disclosures about U.S. spying on European countries.

It's understandable why they'd view Snowden's revelations through a self-serving prism, but the fact that U.S. intelligence services spy on foreign entities isn't the problem, nor is it what makes Snowden's actions historically significant. Spying on foreigners is what all intelligence services are meant to do -- even though they tend to point fingers at others while claiming moral superiority.

Meanwhile, the Snowden docs busted Canadian intelligence for collecting metadata on phone calls and emails to and from Brazil's Mines and Energy Ministry.

What do Americans care if the NSA and CIA are spying on foreign nations when everyone else is doing the same thing? Most don't.

The value of the Snowden disclosures lies in something members of the intelligence establishment rarely bring up, perhaps because they don't want to draw attention to it. Snowden revealed the secretive, highly organized system of cooperation between government and the private sector in the mass collection of citizens' personal information and data. It fueled a distrust of opaque institutions run by elites, and it created suspicion that the top-secret classification was being exploited to shield those involved from accountability.

Against that backdrop, Trump emerged, railing about untrustworthy elites who serve their own interests to the detriment of average citizens. Dozens of national security officials from Trump's own party even drafted a letter denouncing Trump's candidacy, telling people how to vote and thereby helping to prove Trump's point.

Then, after Trump won, some members of the same military-industrial complex served up the "Russian hacker" theory -- which later morphed into "Russian interference," then "Russian online trolls" -- to explain this unfathomable result. Could voters be insulted any further than to have their choice dismissed by elites as an act of manipulation?

The election of Trump showed that Americans knew exactly who was manipulating them.

Last year, WikiLeaks published a cache of documents code-named "Vault 7." It revealed that the CIA had developed tools allowing the agency to spy on people through their iPhones and televisions, hacking into systems while removing all traces of their activity.

Right on cue, various experts immediately attributed the Vault 7 leak to Russian hackers, with Britain's Daily Express tabloid warning that British intelligence could be Russia's next target. Last week, however, we learned that it wasn't Russian hackers at all. A former CIA software engineer, Joshua Schulte, was charged with violating the Espionage Act by stealing and leaking classified information.

Establishment elites think it's easy to deflect attention away from the questionable behavior of government agencies by blaming the Russians, Snowden, Schulte or whichever other scapegoat comes along. It's this mentality that led tone-deaf elites to believe that Hillary Clinton would beat Donald Trump. The institutions themselves, and the people in charge of them, have a problem: The American people no longer trust them. If Snowden and others are symptoms of the problem, then Trump is the best shot at treating the underlying cause.