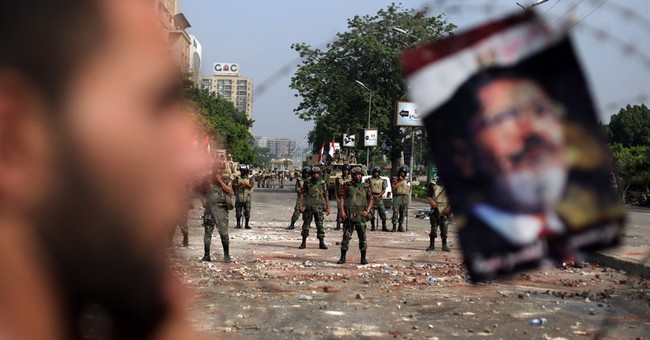 In January, Egyptian newspapers reported that the commander of Iran's Quds Force, Qassem Suleimani, had traveled to Cairo that month to meet with Egyptian President Mohammed Morsi's aides about setting up a spy service that would answer to Iran and circumvent the Egyptian military. Were the Egyptian people really going to sit back and allow Iran to take over their country?

Imagine a conflict in which American, Egyptian and Israeli intelligence are all on the same side as the Egyptian people, draining the swamp of the Islamic extremists who subverted Egypt's fledgling democratic structures to run a de facto dictatorship and explored the idea of crawling into bed with Iran.

It's not the first time that a recent popular uprising in the region wasn't what it appeared to be on the surface and, on a clandestine level, involved Iranian influence. I suggested in a column last month that the popular protests in Turkey were cover for an Iranian intelligence operation to disrupt the staging base for the Western-backed Syrian opposition. Mossad (Israeli foreign intelligence) chief Tamir Pardo confirmed as much in a Times of Israel article entitled "Mossad head, in Ankara, reveals Iran's anti-Turkish activity." Anyone taking what they were seeing at face value would have mistakenly concluded that the Turkish people had suddenly gotten fed up, en masse, all by themselves.

All that the general public has seen transpiring in Egypt is a massive popular uprising, but what we've most likely been witnessing is a multi-actor counterinsurgency operation that serves a dual purpose: preventing Iran from getting its tentacles into yet another a Western ally, and liquidating extremist Islamic elements under the guise of popular insurgency. It would explain this week's massacre at the Muslim Brotherhood protest that left 51 dead and several hundred injured. A civil war? Or a counterinsurgency operation leveraging the fog of war?

It all follows Pentagon Field Manual 3-24 on counterinsurgency: "With good intelligence, counterinsurgents are like surgeons cutting out cancerous tissue while keeping other vital organs intact." The COIN (counterinsurgency) principles of minimal/appropriate force and empowerment of the lowest levels, and also the primary objective of legitimacy, are all at play.

It's the kind of phenomenon that turns the usual narratives and paradigms on their heads. Those in the "blame America first" crowd must be awfully confused. They blamed America for backing and installing Morsi just a short time ago, and they're now holding America responsible for deposing him. None of this would be possible without the support of the Egyptian people, but that doesn't serve the America-bashers' narrative. In their minds, America's interests are always diametrically opposed to those of the locals. America doesn't need to articulate its foreign policy interests vis-à-vis Egypt this time, since there are plenty of Egyptians who are on the same page.

It would be a shame for this fragile democracy that elected the extremist Muslim Brotherhood (mainly because there were far too many opposition candidates running too diffusely against this mob) to be usurped by something as undemocratic as a military coup d'état. Oh, wait ... no it wouldn't. Because there was very little that was ever free or democratic about Morsi's leadership. I could put the crown jewels on my head and call myself the Queen of England, but no one in their right mind would permit me to lord over them.

Unfortunately, a nation so new to democratic ways had no recall provision that could be used to depose Morsi, so that left revolution as the only alternative to allowing the authoritarian subversion of democracy.

So who else might have wanted Morsi gone besides the Egyptian masses? Well, the Egyptian military and intelligence services -- but they can't really be divorced from the people themselves. Regardless of who has been in power in recent times, the Egyptian military has actively backed the people and has fostered and maintained good relations with America, Israel (since the 1979 peace treaty) and their allies. Take what America's Founding Fathers imagined of a people's militia able to protect the populace from an abusive government, and you have the Egyptian military. That's why America is trusting Egypt with $1.3 billion in annual military aid.

Last month, 43 workers for nongovernmental organizations, including at least 15 Americans, were sentenced in Egyptian criminal court to up to five years of imprisonment after what the U.S. State Department called a "politically motivated trial." Meanwhile, around the time of his ouster, Morsi was seeking to enact a law allowing the Muslim Brotherhood to choose which NGOs would receive the funding generously provided by America, thereby rendering those NGOs little more than the Brotherhood's puppets -- and ultimately Iran's.

Good to see the people of Egypt take a stand against Iranian imperialism and influence.