Rachel Alexander
|
Posted: Sep 26, 2016 12:01 AM
Share   Tweet
The opinions expressed by columnists are their own and do not necessarily represent the views of Townhall.com. 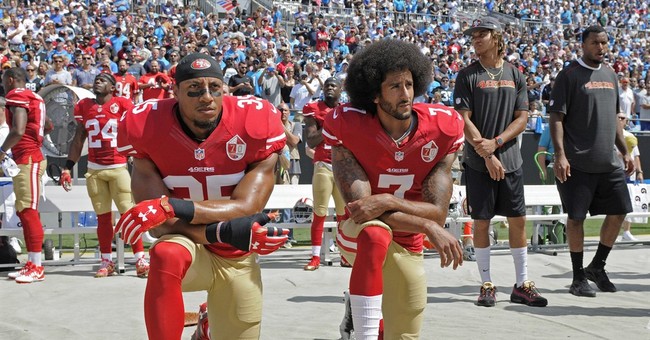 The left has created a new, fashionable way to bash the U.S., through its creation of Black Lives Matter. Now, some of the most wealthy, entitled athletes in the country are disrespecting the national anthem, alleging rampant racism. President Obama could have used his position as the first black president to show that race relations are better than ever, but instead he has used his bully pulpit to fan the flames of racism, making up racism where it doesn’t exist. A black police officer shoots a black suspect with a gun who refuses to put his gun down? Obama asserts that is racism.

The disrespect toward the national anthem started when San Francisco 49ers starting quarterback Colin Kaepernick refused to stand for the The Star-Spangled Banner before preseason games in August. Several black members of other NFL teams followed suit prior to their games throughout September.

The backlash has been strong. Players are losing their endorsements and fans yell angry words from the stadium seats. Many are declaring their intent to boycott the NFL, including actor James Woods, who says he will "never watch the NFL again." Some fans posted videos of themselves online burning Kaepernick jerseys. An NFL executive called him a traitor and former Bears coach Mike Ditka told him to “get the hell out” of the country. Ditka told a Dallas radio station, “...I don’t see all the atrocities going on in this country that people say are going on.” Consequently, Kaepernick was replaced by Blaine Gabbert on September 3 as starting quarterback for the 49ers.

After it was rumored that the entire Seattle Seahawks team might sit during the national anthem prior to a game on 9-11, the team instead stood with locked arms and many of them with their hand over their heart. Wiser minds prevailed, realizing a boycott of the team could seriously affect the local economy. The Seattle area has become so radically left in recent years that little remains except professional sports for average Americans to appreciate there.

University of Michigan head coach Jim Harbaugh, whose own players have protested the anthem, saidwhile he approves of Kaepernick’s motivation, he takes exception to his method of action. Oakland Raiders coach Jack Del Rio also spoke up critically. “For us, I think it’s more about recognizing you’re part of an organization and you’re representing our organization and our organization believes you should pay respect to the flag,” Del Rio saidduring the preseason. “So save those individual decisions to express yourself for an individual forum. That’s how we feel, in talking with [Raiders owner] Mark Davis."

The protests have spread to college football, the WNBA, and high school football. Some players are kneeling or raising their fists instead of sitting, apparently getting cold feet about how disrespectful sitting is to our military and veterans (or just concerned about losing million dollar endorsements?).

Members of the marching band for the Southern Methodist University Mustangs in Dallas knelt during the national anthem, which looked silly because they were still playing the tune. In stark contrast, “The Mustangs wore special decals on their helmets on Friday to honor Dallas police officers and first responders who have died recently.” The team also held a moment of silence before the game for the fallen officers.

The left has indoctrinated the younger generations so heavily through the educational system and left-leaning media that the most privileged black athletes now identify with victimization. Kaepernick is worth somewhere from $17.2 to $22 million, and pulls in $8.4 million a year. According to Money Nation, that’s 84 times the median salary of an MBA graduate.

"I am not going to stand up to show pride in a flag for a country that oppresses black people and people of color,” he told NFL media. “To me, this is bigger than football and it would be selfish on my part to look the other way. There are bodies in the street and people getting paid leave and getting away with murder.”

Kaepernick’s birth mother, Heidi Russo, who gave him up for adoption when she was 19 because she was single and destitute, spoke up against his actions. She tweeted, “There's ways to make change w/o disrespecting & bringing shame to the very country & family who afforded you so many blessings.”

The sad thing is the athletes who fall prey to this indoctrination will forever have their foolish actions out there on the internet following them around. They will receive vitriolic responses from patriotic Americans’ responses that really should be directed at the hatemongers who cruelly indoctrinated them.

There is a time and place for legitimate political protests. National football is as American as apple pie — and the sport’s accompanying national anthem. If players want to take out an ad with their own money to influence Americans, they have the right to do so. As famous as the players are, they already have influence without needing to take advantage of a football stadium audience prior to a game. For wealthy, entitled athletes to use their privileged position to rub in leftist viewpoints to thousands of common Americans is despicable.

The protests are disrespectful to the men and women who served our country in the military, many who lost their lives and limbs in order to protect freedom for the rest of us. The reason these entitled athletes have the freedom to pull off rude stunts like this is because of them. In fact, The Star-Spangled Banner is about the sacrifices our military made to free us from English colonial rule.

Instead of shunning the national anthem, why don’t these players use their influence to protest real tragedies, like the tens of thousands being tortured, raped and murdered by ISIS? Or, instead of being so full of hate, why don’t they direct their efforts toward helping out the black community, rather than helping the left tear it down by targeting black police officers and patriotism? Notably, occasionally a black man or woman will sing the national anthem prior to these games, not exactly the picture of oppression. The NFL is a private organization, and the leadership has the ability to stop the offensive behavior. It’s not free speech.