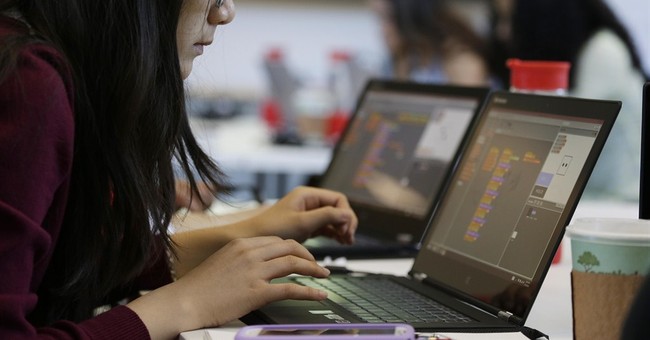 The highly acclaimed school standards called Common Core are becoming so unpopular that they may soon be politically untouchable. The critics are piling on from Glenn Beck to the Wall Street Journal, with senior academics and activist parents in-between.

The latest is a detailed criticism of the mathematics standards by a prize-winning math professor at the University of California at Berkeley, Marina Ratner. It is refreshing that her criticisms are very specific and include examples of assignments that parents can see are ridiculous.

Professor Ratner became alerted to the stupidity of Common Core by looking at the homework assigned to her grandson in 6th grade Berkeley middle school. Fractions are taught by having the kids draw pictures of everything, such as 6 divided by 8, and 4 divided by 2/7, and also by creating fictional stories for such things as 2/3 divided by 3/4. A student who gives the correct answer right away and doesn't draw a picture or make up a story loses points.

Ms. Ratner concluded that Common Core is making simple math concepts "artificially intricate and complex with the pretense of being deeper, while the actual content taught was primitive." The bottom line is that Common Core is inferior to the current good California standards, and the $15.8 billion spent nationally to develop and adopt Common Core was a gigantic waste.

College ready? That's another deceit. Math experts are saying that Common Core standards are not preparing students for colleges to which most parents aspire to send their children.

The Common Core History Standards have just become available. Real scholars say they are a "stealthy" plan to teach kids a leftwing curriculum.

Scholar Stanley Kurtz says that the new plan for teaching American History is spelled out in the SAT college entrance and Advanced Placement exams. They pitch out "traditional emphasis on America's founders and the principles of constitutional government" in favor of a leftist "emphasis on race, gender, class, ethnicity."

According to Kurtz, "James Madison, Thomas Jefferson and the other founders are largely left out of the new test unless they are "presented as examples of conflict and identity by class, gender, race, ethnicity, etc." The text of the new AP U.S. History exam has been closely guarded, revealed only to a few certified AP U.S. History teachers who are sworn to secrecy.

Parents who are attentive to their children's studies and homework have been up in arms against Common Core for many months. Now Common Core has become such a big issue that it's beginning to bring the politicians into line with what the public is demanding.

Indiana was the first state to show the political power of the anti-Common Core movement. The activist moms defeated a superintendent of education and several legislators on this issue.

Oklahoma made the biggest splash when the state legislature voted to repeal the state's earlier endorsement of Common Core. The governor signed the repeal, but the unelected state board of education impudently filed suit to nullify the repeal, and then the Oklahoma state Supreme Court wisely upheld the elected legislature's repeal.

The state of Texas, under Gov. Rick Perry, was smart enough to be one of the five states that never signed on to Common Core in the first place. But now the pressure is on to force Texas to use the new AP U.S. history exam anyway, and Texans claim that is illegal under state law.

Louisiana was one of the original 45 states that endorsed Common Core before the standards were even written. But one day Gov. Bobby Jindal actually read his son's Common Core math homework, was shocked, and then issued an executive order to block its implementation in Louisiana.

Two more governors have just seen the light and turned against Common Core. Wisconsin Gov. Scott Walker announced that he wants the state legislature to repeal the standards when it reconvenes in January, and Gov. Gary Herbert of Utah ordered his attorney general to conduct a review of the controversial standards.

Hoping to line up the support of teachers, the Gates Foundation education chief is now urging states to wait two years before using Common Core tests to make decisions about teacher performance.

Like many do-gooders, Bill Gates is obsessed with the problem of inequality. However, Common Core's way of trying to overcome inequality is by dumbing down all U.S. students and pretending, like the Lake Wobegon kids, that all children are above average.

Reacting to the growing opposition to Common Core, the Bill & Melinda Gates Foundation, the biggest money bag for Common Core, is now urging states to have a two-year moratorium on all states and school districts about to make any high-stakes decisions based on tests aligned to the new standards.