The President's Grab for Dictatorial Power 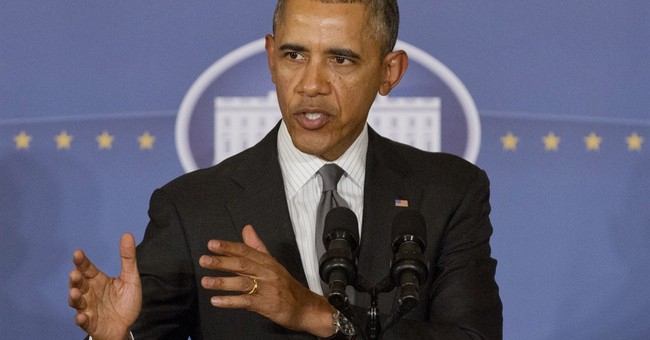 The United States is at "a constitutional tipping point" and "in the midst of a constitutional crisis." Has President Barack Obama unilaterally overturned the constitutional framework of three branches that is the basis of our unique and successful system of self-government?

That question is not just partisan bickering by Republicans and tea party activists. It was spoken in all seriousness in testimony before the House Judiciary Committee by a distinguished constitutional law professor who voted for Obama.

Jonathan Turley of George Washington University said that the "massive gravitational shift of authority to the executive branch" is unconstitutional and threatens the stability of our separation of powers and checks and balances. We can point to a few moves in that direction under previous presidents, but the current shift of power is proceeding at "an alarming rate," while (and just as ominous) the other branches (Congress and the courts) are "mute and passive" in the face of Obama's unprecedented expansion of executive branch power.

Our Constitution gives the power to declare war exclusively to Congress, but Obama thinks he can make a "unilateral commitment of our country to war." Turley explained that Obama "funded an entire military campaign (in Libya) by shifting billions in money and equipment without asking Congress for a dollar." He just transferred the money from another account, boasting that he "alone would define what is a war."

Obama is eager to get federal mitts on school curriculum so the screws can be tightened on what kids learn and (just as important) what they do not learn. The previous law to attempt to control education, No Child Left Behind, didn't fit into his plan, so he just nullified it by a series of unilateral waivers and is now welcoming nationalization of curriculum by Common Core.

When Obama, in his State of the Union address, announced he would take unilateral action "with or without Congress," Turley expected "an outcry" from his congressional audience, but that didn't happen. Where was Joe "You Lie" Wilson when we needed him to call out "you are unconstitutional"?

It is clear Obama is trying to rule the country from the executive branch only. As Turley pointed out, "Congress is becoming marginalized" by "hundreds of thousands of regulations that are promulgated without direct congressional action and outside the system created by the framers."

Spelling out the problem further, Turley said, "a fourth branch has emerged in our tripartite system ... The vast majority of 'laws' ... are not passed by Congress." This "has accelerated at an alarming rate" and caused "a massive gravitational shift."

The heart of Obamacare, which Obama's appointees kept reminding us we must obey because it is "the law of the land," was a set of minimum requirements for insurance plans. When millions of nonconforming plans were canceled, Obama unilaterally created one exemption or change after another without any statutory authority, and changed the dates for compliance by employers that had been legislated by Congress.

The Constitution makes it the prime duty of the president to "take care that the laws be faithfully executed," but Obama refused to faithfully execute the Defense of Marriage Act, which had been overwhelmingly passed by Congress and signed by former President Bill Clinton. Obama instructed Attorney General Eric Holder not to defend DOMA in court, and then Holder told all the state attorneys general not to defend the marriage laws in their own states.

Thank you, Professor Turley for your courage and forthrightness in explaining to the House Judiciary Committee how Obama "has knowingly and repeatedly violated the Constitution."