Good News about the 2009 Election 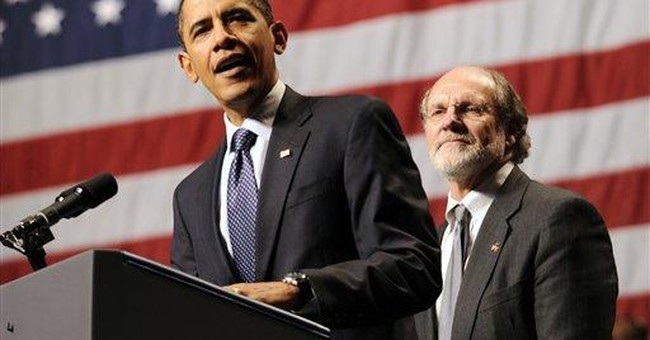 Ever since Barack Obama's election, the mainstream media and liberal commentators have been gleefully proclaiming the death of the Republican Party and predicting it could be revived only with mouth-to-mouth resuscitation from "moderates" and RINOs (Republicans In Name Only). The Nov. 3 elections proved that those obituaries, in the famous words of Mark Twain, were "greatly exaggerated."

November's elections showed that the American people are waking up to the economic disasters Barack Obama is inflicting on America. The voters are upset and angry about Obama and his congressional cohorts creating debt for our children and grandchildren that can be paid only by middle class taxes and inflation, taking over whole industries such as health care, and deceiving us with the expensive stimulus bill that creates only government (not private sector) jobs.

Some of the popular homemade signs carried at the tea party rallies said it all: "I love my country, but I don't trust my government."

In the most controversial election on Nov. 3, New York House District 23, Republican Party leaders made the mistake of nominating a pro-abortion, pro-same-sex-marriage, pro-Obama stimulus package and pro-card-check feminist (who ultimately endorsed the Democrat). Then they gave her nearly a million dollars of national Republican campaign funds. Conservatives rebuked the Republican Party by running a real conservative on the Conservative Party ticket, who was then endorsed by a prestigious list of Republicans led by Sarah Palin, Dick Armey, Jim DeMint and the Club for Growth.

The conservative, Doug Hoffman, lost narrowly to the Democrat (who got 49 percent of the vote), but the race taught several valuable political lessons. The road to Republican victory is to nominate a real conservative because the voters absolutely will not accept an appointed liberal, feminist or RINO.

The voters will not be fooled by slogans that we must "broaden the base" of the Republican Party and become more "inclusive" by adopting the other party's positions. Conservative Republicans want to be "inclusive" like Ronald Reagan, and they welcome the tea party people, Joe the Plumber and those who realize that jobs are the big issue today.

The 2009 elections show that conservatives are winning the independents, the same independents who voted for Obama in 2008 and are now disillusioned with his brand of "change." Conservatives can win if they dominate the Republican Party as they did in 1980.

Another lesson we learn from the New York race is that a third party is not the way to go. If there ever were a viable third party, it is the New York Conservative Party, which has had a respectable place on New York ballots for many years, but it still couldn't elect Doug Hoffman.

Conservatives who are in the political game to win must participate in Republican primaries and precinct caucuses and nominate conservatives on the Republican ticket. That route is vastly easier, less expensive and more productive than trying to build a third party.

Other November elections that were happy news for conservatives included the big victory of authentic conservative Bob McDonnell as governor of Virginia (a state that went for Obama in 2008), and the amazing victory of Chris Christie as governor of blue-state New Jersey (despite incumbent Jon Corzine spending $25 million on re-election).

In Pennsylvania, overcoming three-times-as-much spending by the trial lawyers, conservatives elected Republican Judge Joan Orie Melvin to the crucial vacancy on the state Supreme Court. This court had been tied three Democrats to three Republicans and will control redistricting, which could mean the gain or loss of three or four Republicans in Congress.

On Nov. 3, Maine became the 31st state to uphold the traditional definition of marriage by a vote of the people. Maine voters repealed Maine's new state law allowing same-sex marriage.

The pro-homosexual New York Times has sunk into deep depression about what it called "a crushing loss" for the homosexual agenda, which had counted on winning because it spent "far more money" and "geography was on their side" in New England, the most pro-gay section of the country. The gays now fear revival of the pre-Olympia Snowe slogan, "As Maine goes, so goes the nation."

As the old adage reminds us, coming events cast their shadows before them. Conservatives are gearing up with hope for the 2010 congressional elections.