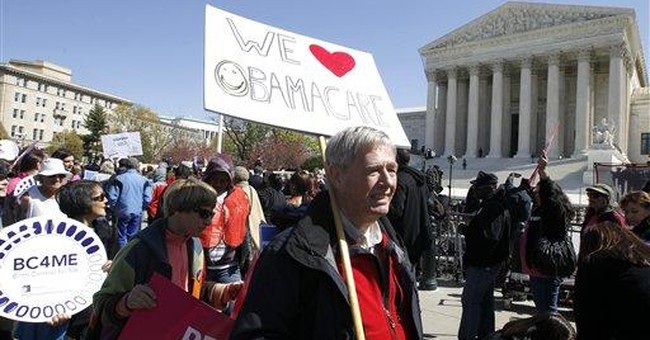 According to the Washington Post, this is "Obama's last campaign"; he's brought back his polling director from the campaign, David Simas, to run the largest sales effort of its kind: an effort to sell expensive health insurance policies to an estimated 2.7 million young and healthy people who don't use much health care. If that describes you, expect to be inundated with a sales blitz the likes of which the world has never seen, with ads on TV, radio, online, email, mail, at school, at work, and even from nagging parents. Don't fall for it. They are all trying to trick you into buying a product you don't want or need. It's a scam and you should say no.

Consider the price. This year, a typical individual policy for a 25 year-old non-smoker in California costs $92 a month. Next year, under the new health reform law, it will cost $205. Surveys show that price is overwhelmingly rejected as unaffordable, which is where the snake oil sales pitch comes in, stressing not the price but the alleged "savings" from taxpayer-funded subsidies. Supposedly, you're saving thousands of dollars, they say, even though the price doubled. This is the same kind of sales tactic that Elliot Spitzer infamously sued clothing store Jos A Bank over - the claim of savings from a "full price" that never existed.

Even worse, the vast sales force hired to sell health insurance is largely unmonitored and unscreened. Which means thousands of them may have taken the job primarily as a cover to collect your private information, including Social Security and bank account numbers, for the purpose of committed fraud and identity theft. In California alone there are 21,000 so-called enrollment counselors, and Democrat Dave Jones, the state's insurance commissioner, is warning that the state has no plan to stop them from committing fraud. "We can have a real disaster on our hands," he said.

And there is literally no benefit for a healthy young person to sign up, because the new regulations in the health reform law make it illegal for insurance companies to reject you even after you get sick, or to charge you higher premiums. So in the event that something happens to you, you can always sign up after the fact and save the thousands of dollars you would have otherwise wasted along the way.

This feature of the law is problematic as a matter of public policy, because it creates an incentive only for sick people to buy insurance, forcing premiums ever higher. But for an individual young person, it makes the decision to buy coverage foolish.

In fact, if you're a young, healthy person, the only good argument for you to buy into the new health insurance system is that you are required to do so, forced by the individual mandate as a matter of law. But the Supreme Court let you off the hook for that last year when they found that the only way for the mandate to be constitutional is if it is simply a legally neutral choice between spending thousands on insurance or paying a $95 penalty tax.

So it's up to you. Spend thousands of dollars on health insurance you don't need, or pay a simple $95 tax. Don't get scammed by the fancy sales pitch. It's an easy choice.