Iceland and the ‘Equal Pay’ Whack-a-Mole

Peter Parisi
|
Posted: May 01, 2017 11:35 AM
Share   Tweet
The opinions expressed by columnists are their own and do not necessarily represent the views of Townhall.com. 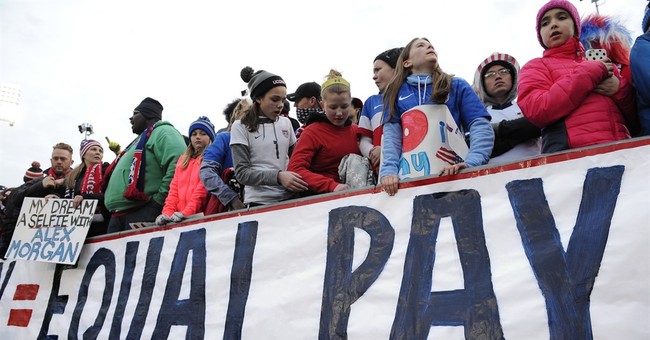 Liberal public-policy nostrums are like the arcade game Whack-a-Mole. You “whack” the mole with a mallet when it pops its head up from one hole, only to have another pop up elsewhere. Liberal ideas, like the moles, seldom stay whacked.

Perhaps the best example of that are the various iterations of “equal pay” legislation that have come before Congress over the years, even though pay discrimination has been against federal law since the Equal Pay Act of 1963.

One would’ve thought liberals would have declared victory and moved on after the Democrat-controlled Congress in January 2009 made the Lilly Ledbetter Fair Pay Act the very first piece of legislation it passed and sent to President Obama for signing into law. The law made a moving target of the statute of limitations on equal-pay lawsuits.

Even after Ledbetter, a Senate staple was the ritual introduction every year by then-Sen. Tom Harkin of his Fair Pay Act. The Iowa Democrat said his bill would address “systemic factors at the core of the pay gap” — namely, that women and men are supposedly “segregated into different occupations” and that “‘women’s jobs’ are paid significantly less than ‘men’s jobs,’ even when those jobs are equivalent in skill, effort, responsibility and working conditions.”

Mr. Harkin’s Fair Pay Act would have required employers to provide equal pay for jobs that are “equivalent,” but the devil has always been in the details. It would have been left to federal bureaucrats and tort lawyers to determine what constituted “equivalence.” That very real fear — and not opposition to “fair” pay, per se — is why his Fair Pay Act never passed.

An earlier iteration, “comparable worth,” concocted by the feminist left, died an equally deserving death in the mid-1980s, but not before Clarence Pendleton, President Reagan’s chairman of the Civil Rights Commission, famously dubbed it “probably the looniest idea since Looney Tunes came on the screen.”

Mr. Harkin is no longer in the Senate, but the idea lives on. This time the “fair pay” Whack-a-Mole has popped up about 2,460 nautical miles from Washington in Reykjavik, Iceland.

Legislation pending in Iceland would require all employers with more than 25 employees to be certified annually that they pay people equally if they’re doing “equal” work, regardless of sex, ethnicity or nationality, or even sexuality. To obtain the equal-pay certification, according to a recent report in the National Law Review, “employers would have to assess every job and identify and eliminate wage gaps that exceed five percent.”

As proposed, Iceland’s largest companies would start undergoing these “equal-pay audits” next year. Having to “prove” they are paying men and women equally is akin to “guilty until proven innocent.”

The legislation comes on the heels of an equal-pay pilot program in Iceland under the supervision of a governmental Action Group on Equal Pay. The equal-pay standard includes “evaluating positions and assigning them a value based on the position and not on the person in the position.”

But such an assigning of a “value” to positions would inherently — and inevitably — be an arbitrary and capricious process, especially when imposed by government bureaucrats responding not to free-market forces, but to left-wing interest groups’ lobbying.

That’s the same results-oriented outcome that has perpetuated the oft-repeated canard that women in the U.S. are paid 79 cents or so for every dollar earned by men. That figure deliberately fails to take account of differences in, among other variables, industry and occupation, education and experience, length of tenure in the job, the number of hours worked, and time away from the workforce to raise children.

If Iceland goes ahead with its market-distorting “equal pay” scheme, look for the country’s smaller employers to shed jobs to get under the 25-employee threshold, just as small businesses here slashed jobs and work hours to avoid being subjected to Obamacare’s mandates.

The Icelanders who lose their jobs as a result will be the moles who will get whacked.

And when this “equal pay” mole pokes its head out of its hole back on this side of the pond, as it surely will, it needs to be whacked all the way back to Reykjavik.