Peter Lillback
|
Posted: Feb 23, 2017 12:01 AM
Share   Tweet
The opinions expressed by columnists are their own and do not necessarily represent the views of Townhall.com. 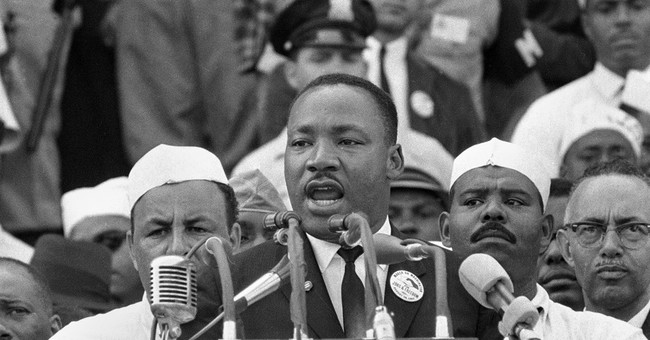 All of these seem pretty innocuous. But sadly, some contemporary protest movements tend to strip Rev. King of his Christianity, turn his non-violence into conflict and reject his message of love for hateful rhetoric.

Today, as we celebrate Black History Month, let’s remember his true legacy, not falsehoods spread by those trafficking in his name.

On Martin Luther King Day last month, Black Lives Matter protesters in Chicago tried to turn the venerable reconciler into someone he was not, pushing the #ReclaimMLK hashtag on Twitter and urging activists to “engage about the real radical King they don't want you to know about!”

If the Black Lives Matter movement wants legitimately to claim the Rev. Martin Luther King Jr., they are going to have to change their ways. They will need to remember that his radicalism was shaped by his Christian faith. His ideal extremists were extremists for love such as Jesus Christ, St. Paul and Martin Luther. In his renowned “Letter from Birmingham Jail,” King declared:

“But though I was initially disappointed at being categorized as an extremist, as I continued to think about the matter I gradually gained a measure of satisfaction from the label. Was not Jesus an extremist for love: ‘Love your enemies, bless them that curse you, do good to them that hate you, and pray for them which despitefully use you, and persecute you.’ … Perhaps the South, the nation and the world are in dire need of creative extremists.”

This is the real “radical King.” It was his extremism for love in the Christian tradition that caused him to seek to reconcile blacks and whites precisely because Black lives matter and White lives matter.

He famously spoke of his dream when his “four little children” would “one day live in a nation where they will not be judged by the color of their skin but by the content of their character.” In fact, his dream could not happen unless the racial divide was healed in the land. “I have a dream that … one day right there in Alabama little black boys and black girls will be able to join hands with little white boys and white girls as sisters and brothers.”

So yes, King was an extremist. He was a radical. But not one that engendered hate, spurred violence or elevated the color of one’s skin above the content of their character.

If his authentic message is not embraced, the new protest movements will co-opt him and tragically reduce him to a bare MLK and redefine him as a “radical King.” If they succeed in this, his new followers will look more like his segregationist opponents than himself.

Will the Black Lives Matter movement become like the segregationists that King opposed and described as “vicious racists, with [their] governor having his lips dripping with the words of hostility and opposition?” In his “I Have a Dream” speech on the Capitol Mall he offered a better way:

“We must not allow our creative protest to degenerate into physical violence. Again and again we must rise to the majestic heights of meeting physical force with soul force. The marvelous new militancy which has engulfed the Negro community must not lead us to distrust of all white people, for many of our white brothers, as evidenced by their presence here today, have come to realize that their destiny is tied up with our destiny and their freedom is inextricably bound to our freedom. We cannot walk alone.”

The Rev. Dr. Martin Luther King Jr. clearly was an extremist. And given some of the protestors on the march today, we need many more extremists that follow in his footsteps.