Reflections Upon a Mixed Bush Legacy 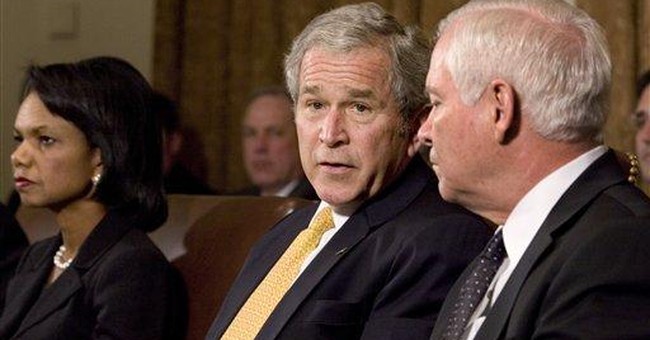 As President George W. Bush prepares to leave office a review of his eight years as the Nation's chief executive is in order. While the end of his presidency has been overshadowed by economic problems and angry calls from the left about various aspects of the war against radical Islam, Bush did have some success which should be recognized.

Bush's greatest success in office came when he remained faithful to his principles-namely, his belief in the sanctity of human life. When, in 2001, the issue of scientific research on embryonic life came to the forefront, Bush wisely held the line on Federal funding for the destruction of human embryos not already in use, in spite of calls from many that he was "anti-science." Six years later he vetoed the Stem Cell Research Enhancement Act, which would have permitted public financing of human embryonic stem cell research.

When vacancies appeared on the Supreme Court Bush was able to find nominees who were highly qualified and who respected the Constitution, as written, to be the law of the land. Chief Justice John J. Roberts, Jr. and Justice Samuel A. Alito have proven to be sound scholars, as well as serious and thoughtful Justices who respect the limits placed upon their branch of government by the Constitution. In other words, they have not tried to legislate ideologically from the bench nor attempt some sort of social or cultural engineering through the law.

One other success stands out. Bush frequently and consistently supported faith-based non-profits and voluntary organizations within American society. He recognized that they role they play in local communities, at the State and national levels forms part of the bedrock of America. This is a theme as old as the country itself, but after the secularist assault on faith in the 20th Century, many of these groups struggled. Now more people recognize the services and resources these organizations contribute to those in need and, especially in the aftermath of Hurricane Katrina, how valuable they are.

In spite of the positive impact of these Presidential decisions, there were others which adversely have affected the country. The most prominent of these is Bush's recklessness in fiscal policy. He did not veto a single budget bill in his first term, though many were saddled with pork and unnecessary spending. He did not begin to veto spending bills until 2007. In fact, in his entire eight years Bush only used his veto power twelve times. Compare this to his three predecessors: Ronald W. Reagan vetoed 78 bills, George H. W. Bush vetoed 44, and William J. (Bill) Clinton used his veto 37 times. As a result, both the Federal deficit and the national debt have ballooned to unsustainable levels.

Along the same lines, Bush enacted No Child Left Behind, legislation intended to standardize and improve American education but which in fact removed much of what remained of local control and oversight and instead threw millions of taxpayer dollars at public schools which need serious restructuring, not more money. While some States have improved student test scores, the means of achieving such results often have been devious and cunning.

Bush also signed the Medicare Prescription Drug, Improvement and Modernization Act into law in 2003. The program, which provides prescription drugs for the elderly on Medicare, is another massive entitlement program that we cannot afford. The cost of the first ten years of the program has been estimated at $1.2 trillion and counting. And since few government programs, once created, ever decrease in size, one can expect the costs of Medicare prescription drugs to rise much higher in the future, unfairly straining the finances of future American generations.

Finally, in recent months Bush has overseen one of the largest federal interventions into the marketplace in modern memory. His administration has nationalized banks and other parts of the financial services and housing industries and seriously has considered nationalizing parts of the automobile industry. Because of the precedent this has set, others now are trying to grab a piece of the Federal pie. Most prominent among these are States which do not want to face the difficult political decision of balancing their budgets, though some cities have moved in on the act as well.

The one question hanging over President Bush's legacy is the result of the wars in Iraq and Afghanistan. It certainly is true that since going into both countries the United States has not been attacked by radical Islamic terrorists, and Bush deserves credit for this. However, both wars are unresolved. Until they are it is impossible to determine whether each country will be better off than it was beforehand or whether we will have disrupted al Qaeda's network enough to prevent another attack upon U.S. soil. President-elect Barack H. Obama must see that we do not leave either country as we did Vietnam, abandoning our allies and without anything positive to show for our involvement and loss of life. We must win and establish capable governments in our wake, though the sooner this is accomplished the better.

President Bush's legacy, then, is a mixed one. On the fundamental issues of human life and freedom of religion he has been a great leader. On economic and education issues the record is rather unflattering. And on the major foreign policy issue of his presidency history has yet to write the final chapter.