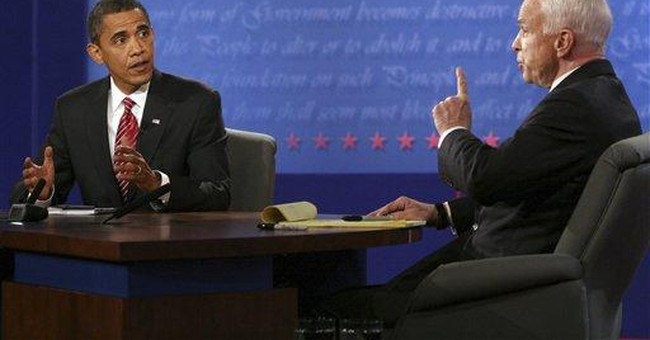 The debates are concluded. In a few weeks voters will decide who will occupy the Oval Office for the next four years.

While Senator John S. McCain, III was impressively aggressive during the last debate, Senator Barack H. Obama made few mistakes. Undecided voters in many focus groups assembled by various media outlets believed that Obama won the debate. That was based upon style and his articulate oratory. McCain had a much better command of the facts and he directly challenged Obama multiple times. To the media that often came across as grumpiness. I heard McCain described as an angry old man. Yet few of the undecided voters were moved by the last debate. They all liked Obama's style but they still have not determined to vote for him.

In state by state Obama has between a 5% and 10% lead. The fact is that his highest percentage is less than 50%. Should almost all the undecideds break for McCain, he yet could pull it off. It is highly unlikely but not impossible.

Obama now is trying to dampen the enthusiasm among his supporters. They are naturally thrilled that their candidate is substantially out front. So Obama tells his rallies that Democrats have a terrible habit of pulling defeat from the jaws of victory.

Obama has this going for him. No candidate who is as far behind at this stage in the election campaign as McCain ever has come back to win. McCain tells rallies he is six points behind and "We've got our opponent just where we want him." McCain is known for being written off and coming back to eek out a last-minute victory.

Then there is the Bradley Effect. Political scientists recently have argued whether the Bradley Effect is still valid. Many believe it has faded away. Others think it has diminished somewhat but yet prevails. The Bradley Effect refers to Mayor Tom Bradley, of Los Angeles, who on election day was way ahead of his Republican opponent in the polls but when the votes were counted Bradley lost California by 50,000 votes. Voters wanted to be politically correct when pollsters asked them so they said they would vote for a Black. When they got in the privacy of the voting booth they voted against the Black candidate. There was some evidence of the Bradley Effect in the primaries. Obama was supposed to win in New Hampshire but Senator Hillary R. Clinton won anyway. That happened in a number of other states. Nowhere, however, was Obama 10 points ahead. The primary was neck and neck with Obama with a slight lead but Clinton won.

McCain said that Senator Obama is already measuring the drapes at the White House. He would not be unjustified if he did so. The odds are that he will win, perhaps in a landslide. The Democrats are poised to win a veto-proof Senate. And they are likely to increase their majority in the House substantially. We will then have a situation the way President Clinton had in 1993 when he first took office. Two years later Republicans ended 40 years of Democratic control in the House and they recaptured the United States Senate after eight years of Democratic control.

One thing is for certain. Obama has a well-organized ground game. He has a voter ID and turnout operation which is even better than the celebrated operation run by the Re-elect Bush Committee in 2004. McCain has nothing comparable. Some states are well organized and can deliver for the Arizona Senator. In places where the state parties lack that capability McCain will be out of luck. We know that left to their own devices many voters will skip voting just because they are preoccupied and no one reminded them or in cases of the elderly drove them to the polls.

This has been an extraordinary election year. No one could have predicted what has happened this year. When this is over we may have to rewrite of the political science text books. I can't help but think of the late Tim Russert of NBC's Meet the Press. How he would have reveled in the politics of 2008. Perhaps he is watching from above.