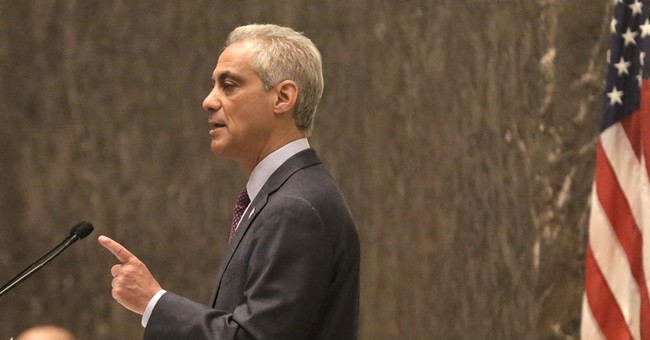 Don’t feel lonely, Mrs. Clinton. You’re not the only public official shielding public actions from the public by using private modes of communication — a private email account and server, or texts on a personal cell phone.

The Chicago Tribune took the Emanuel administration to court recently for the second time in three months. The paper

Still pending is the World’s Greatest Newspaper’s first lawsuit against the mayor’s office, seeking the full disclosure of emails specifically concerning more than $20 million awarded to companies in no-bid public school contracts. The Feds then launched a criminal investigation on the matter and last week that probe led to prosecutors indicting the recently resigned Chicago Public Schools CEO Barbara Byrd-Bennett on 20 felony counts of fraud.

Ms. Byrd-Bennett will appear in court on Tuesday and reportedly plead guilty. The Emanuel appointee is charged with steering $23 million tax-dollars to two companies — SUPES Academy and a subsidiary, Synesi Associates LLC — to which she had ties and, also, allegedly, a promise of ten-percent commission on the deal — that is, a cool $2.3 million.

It keeps getting even richer or thicker or more pungent or something . . . as the two companies and the two owners of those companies — Gary Soloman and Thomas Vranas, respectively — were also charged in the indictment. Like Byrd-Bennett, the businessmen are charged with wire and mail fraud, but also with bribery and conspiracy to defraud.

What do SUPES Academy and Synesi Associates LLC do? You really want to know? They specialize in training principals and school administrators.

This whole corrupt mess, along with a guilty plea by the head of the city’s public school system, certainly concentrates the mind as to why the Trib’s legal complaint is important and, just perhaps, as to why, as the lawsuit states, Freedom of Information Act requests “have been met with a pattern of non-compliance, partial compliance, delay and obfuscation.”

As a statement released by Tribune Editor Gerould Kern made clear, “Regrettably, the city’s denial is part of a pattern of resistance to releasing public documents covered by the Illinois Freedom of Information Act.”

Nonetheless, on Chicago Tonight, Mayor Emanuel offered that, “[W]e always comply and work through all of the Freedom of Information [requests] in the most responsive way possible.”

Probably all just a big misunderstanding . . .

What’s especially droll is to find presidential candidate Hillary Clinton and Chicago Mayor Rahm Emanuel, two Democrats who have long fought against privatizing any government function or service no matter how inefficiently performed or delivered, suddenly embracing a creative new approach to privatizing government . . . beginning with their own cell phones and emails.

And jettisoning any notion of transparency and accountability . . . you know, to the people they’re supposedly working for.